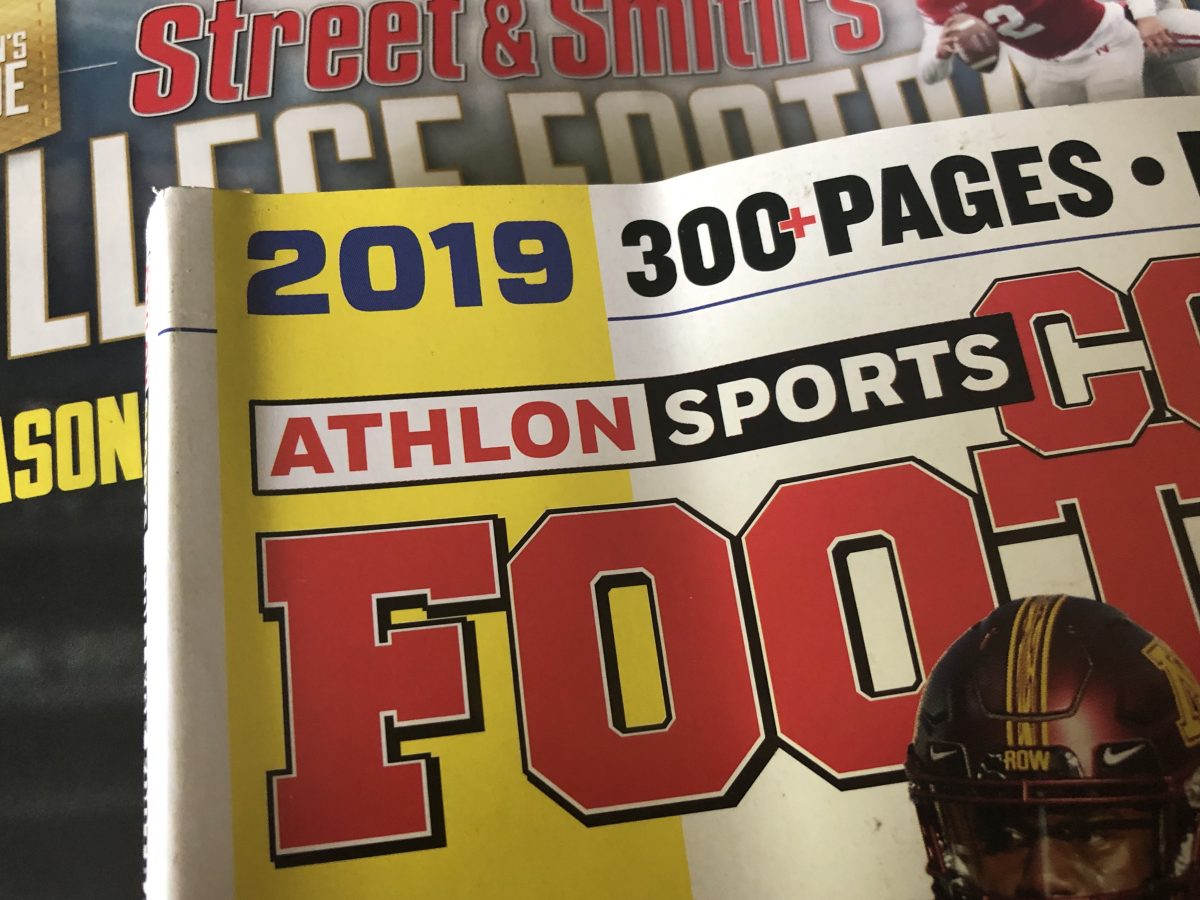 One of the best times of the college football offseason is officially upon us — the release of the preseason magazines. Earlier on Wednesday, Cyclone Fanatic publisher Chris Williams noted the Cyclones’ inclusion in Athlon‘s preseason top-25 for the first time in school history, coming in at No. 24.

Now, we have gotten a chance to dive into the full magazine and that was far from the only honor the Cyclones were given by one of the format’s most prestigious publishers.

Athlon picks the Cyclones to finish third in the Big 12 standings, behind Oklahoma and Texas, while closing the regular season with an 8-4 record overall, a 6-3 mark in conference play and a trip to Orlando to play Virginia in the Camping World Bowl.

The magazine does not list projections for specific games, but one can probably assume the four losses are to Iowa, Baylor, Texas and Oklahoma, the team picked to win the league’s title game in December.

Junior safety Greg Eisworth rounds out the group of four Cyclones pegged for the publication’s preseason first-team All-Big 12 selections to lead a defensive secondary that is listed at No. 3 in the Big 12 unit rankings behind Texas and Oklahoma State.

Unsurprisingly, the two position groups with the biggest questions are the two rated the lowest in the publication’s unit rankings. Senior wide receiver Deshaunte Jones leads the No. 7 ranked wide receivers as a third-team All-Big 12 selection while the team’s running backs are ranked No. 9 after the loss of do-it-all back David Montgomery.

With that said, it is worth noting junior running back Kene Nwangwu is deservingly listed as the first-team All-Big 12 pick at kick returner.

Iowa State also draws strong reviews from anonymous coaches in the league in the “Scouting the Cyclones: Opposing Coaches Size Up Iowa State” section of the team preview.

*** “An extremely well-coached team that has a clear identity on both sides of the ball. The issue here is how much talent they can put in the system and be able to compete with the top programs in the Big 12.”

*** “The like to show attitude on defense; they’re really mean, blue-collar guys who play very downhill, very aggressive. They match up very well against the run… JaQuan Bailey would start for anybody in the league; he’s a hell of an end.”

*** “The line needs to be better, and they need to develop some guys on the outside, but it’s really quarterback development story here. A lot of coaches in the league really like Brock Purdy. That kid has attitude and he fights. He’s a maverick, Wild West-type personality and really fired them up. But now you have to clear up all the freshman mistakes.”

The Cyclones have four games on the schedule listed in the “Games to Watch” section of the Big 12 preview — the Sept. 14 home date with Iowa, the Big 12 opener at Baylor on Sept. 28, the Nov. 9 trip to Norman against Oklahoma and the Nov. 16 battle with Texas in Ames.

Iowa State is also prominently featured in the 2019 edition of Street & Smith‘s College Football Preview. The Cyclones come in at No. 18 in the magazine’s preseason rankings while Oklahoma (No. 4) and Texas (No. 9) both sit inside the top-10.

Naturally, when you consider those rankings, the Cyclones are again picked at No. 3 in the Big 12 with a projected return to the Alamo Bowl in San Antonio for a date with the Washington Huskies, who are pegged at No. 12 in the magazine’s preseason top-25.

The same four Cyclone defenders — Lima, Bailey, Spears and Eisworth — are listed on the publication’s preseason All-Big 12 team while Purdy is credited as the league’s best passing quarterback, noting his mark as the sixth-most efficient passer in the NCAA last season.

Finally, Iowa State is regarded as the publication’s “Team on the Rise” in the Big 12, which is quite clear when you consider the amount of attention the program is already receiving this offseason compared to past seasons.

Safe to say, the secret is out on what’s being built in Ames.