Teams in the WNBA are facing a big deadline on Thursday, as final rosters for the 2019 season need to be finalized to 12 players by the end of the day. The Connecticut Sun currently have 13 players remaining on their slate, meaning former Cyclone Bridget Carleton is one cut away from making the roster.

The spot seems to be coming down to Carleton and the player Connecticut picked three spots ahead of her in the 2019 draft – Marquette’s Natisha Hiedeman.

Carleton and Hiedeman are the last two rookies remaining on the team -excluding first round pick Kristine Anigwe – but it’s assumed she will make the cut.

As for the pair of second round picks, they’re probably sweating things out.

Carleton had a decent preseason performance and was comparative to Hiedeman throughout.

During the first two games of the three-game prelude, the two played almost exactly the same amount. Carleton combined to go 4-for-10 from the floor and 2-of-5 from the 3-point line. Hiedeman was 4-for-9 overall and 1-of-5 from downtown.

The glaring numbers come from the last game the Sun played. Carleton only logged 6:36 minutes of playing time while Hiedeman tallied just over 12.

It was the first time the playing time had differed between the two, though that might not be a bad thing for Carleton. The reasoning for playing Hiedeman a lot in their last game could easily be the team being really on the fence about keeping her around.

Carleton has an outlying stat as well, however. In the Sun’s only loss of the preseason, the Ontario native led the entire team in plus/minus. Not to mention, she was one of three players on the roster to not record a plus/minus in the negative’s in any of the games she played.

We could go back and forth on the numbers all day, but that obviously doesn’t tell the entire story when it comes to picking one or the other.

Regardless, the Sun have a decision to make on Thursday.

Keep in mind, Carleton has already secured a professional contract with the JCU Townsville Fire of Australia’s WNBL. The team has won three of the last five championships in the league, so its safe to say the former Iowa State star will be playing with good company this winter.

If Carleton cracks the roster with Connecticut, the Sun will open its regular season on Saturday night taking on the Chicago Mystics at home. 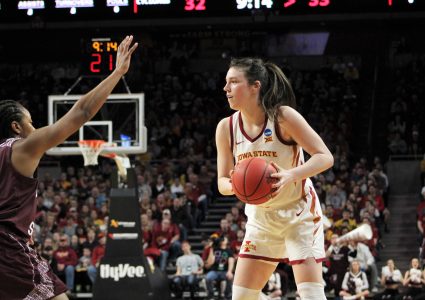