No matter where you guys click today, you are going to find endless stories that outline the legacy that Georges Niang will leave at Iowa State long after he is gone.

They are all very deserving.

This guy is one of the true GOAT’s.

We started our coverage of “Niang Senior Day” a few weeks ago with this phenomenal piece by our wordsmith Brent Blum.

Two weeks ago in this section, I radically called for Iowa State to retire Niang’s jersey tonight. I knew it wouldn’t happen. I’m not sure if I even believe that it should happen. It was a hyperbolic attempt to prove a point though: Just how special No. 31 is on and off the court.

As we count down the hours to tonight’s home finale (6 p.m. on ESPNU), to change the pace for our users, I figured I would go pretty light with the Niang stuff on Monday Musings today. Brent Blum and I did record an in-depth hour-long podcast on the man himself last night.

Before I change topics though, here are a few quick hitters on No. 31.

There are so many of them but the mine comes from Niang’s first start – you guys probably remember it as the Ben McLemore Bank Shot Game – at Allen Fieldhouse during Georges’ freshman year.

Towards the beginning of the game, ripe No. 31 hit a three over a guy named Jeff Withey and proceeded to get T’d up for talking trash immediately after.

In his first start.

Shortly after Niang had signed with Iowa State, I was at some sort of a Cyclone golf outing where over a cocktail, T.J. Otzelberger predicted to me that Niang would be a 2,000 point scorer and eventually have his jersey retired in Ames.

What’s your gut say about Jakolby Long and Solomon Young?

The first time I ever spoke to Georges Niang (March 16, 2011), I was inside of a stuffy Seattle hotel room. (Note to the kids, this was back when Iowa State didn’t play in the NCAA Tournament. You are spoiled.) My wife was on a veterinary medicine rotation out west so I tagged along and worked from the left coast.

In this first phone conversation, Georges told me about how Fred Hoiberg kept comparing him to Kevin Love.

Niang and his mom had planned to fly to Iowa next week where they would unofficially visit Iowa State and Fran McCaffrey’s program down I-80.

Georges joked about Iowa having a lot of cornfields because, you know, Georges always has jokes.

Niang was the proud student body president for the Tilton School in Massachusetts.

— Niang committed to Iowa State on May 15, 2011. It was later that summer where his profile really took off on a national level. Prior to that AAU tour, he had high major offers from Iowa State, Iowa and I believe Texas A&M. I remember at the end of it, Niang was fielding calls from Jim Calhoun at UConn and Florida’s Billy Donovan.

There is an actual game that will be played tonight and Iowa State is a 14.5-point (it opened at 13) favorite over Oklahoma State.

With the emotion that will be in that building combined with the roster that Travis Ford is working with these days, Iowa State should win this game by 20. Yeah, I said it.

I plan to write more about this in the coming weeks but Steve Prohm dropped a stat after Saturday night’s win vs. Kansas State that was incredible – but not surprising at all to me.

In the last five minutes of what I would consider to be Iowa State’s “close wins” in the Big 12 this season (five of them), the Cyclones shot 87 percent (20-for-23) from the free throw line.

In the last five minutes of Iowa State’s “close losses” (seven of them), the Cyclones were 47 percent from the charity stripe (9-for-19).

This doesn’t change anything. It only once again proves how close this team is.

There’s no doubt in my mind that whenever it is the season ends, free throws and defensive rebounding will heavily be discussed in the postgame conversation.

I’ve been jacking around with the trusty mred Big 12 Tournament bracket generator this morning and if you are looking to make plans for Kansas City next week, you can all but bet on Iowa State playing in that late 6 vs. 3 game. From what I understand, the only way Iowa State isn’t in the late game (8 p.m. on ESPNU) is if the Cyclones win at Kansas or if Texas loses at Oklahoma State this week. So I guess anything is possible. 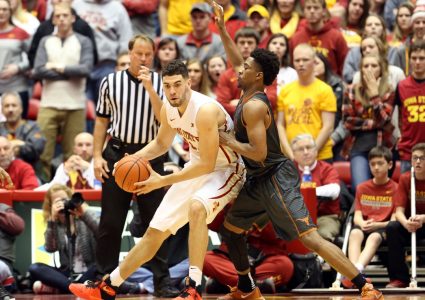