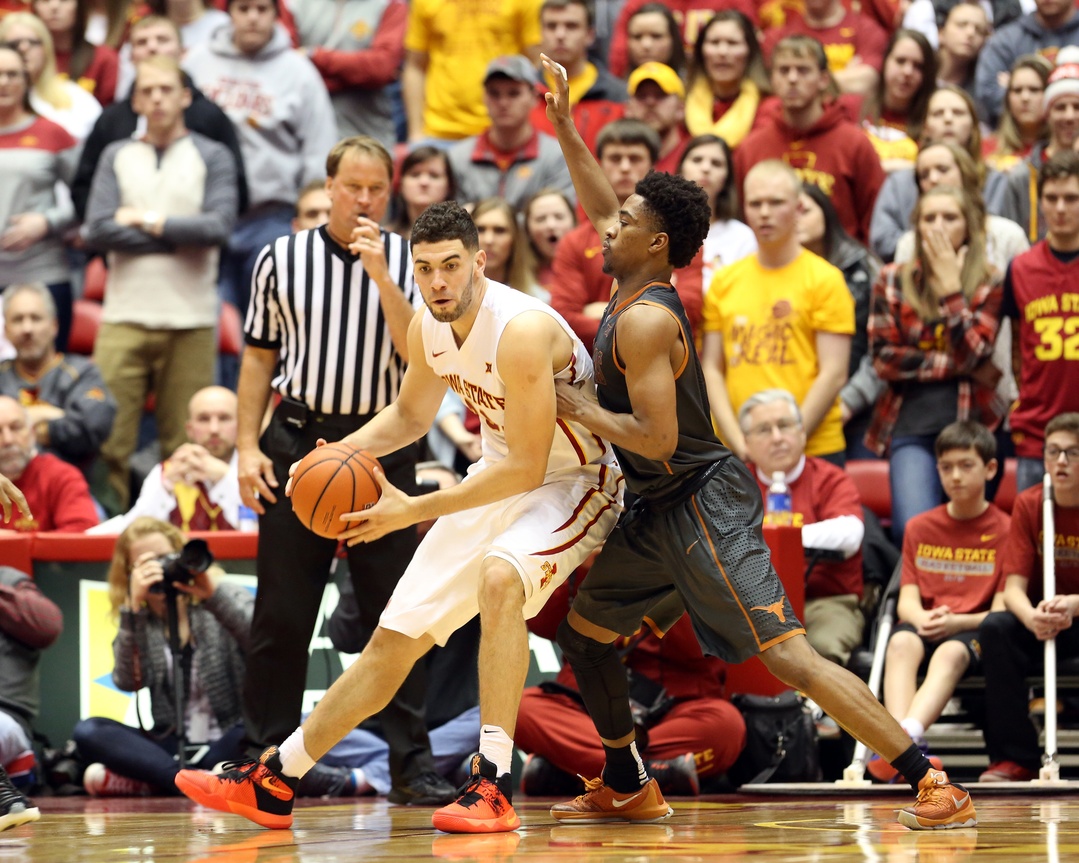 1 – Perhaps this is a bit of a radical idea, but it is one that I think should at least be discussed within the higher ups within the Iowa State athletics department.

Have we considered retiring Georges Niang’s jersey from the rafters of Hilton Coliseum on Senior Night?

I know, I know. That just doesn’t happen.

As athletics director Jamie Pollard tweeted last week, there are a few parameters that have to be met.

Rules are made to be broken. Georges Niang isn’t your ordinary Cyclone.

First and foremost, he is (already) the all-time winningest player in program history (with 93 wins).

When the Cyclones take on Baylor Tuesday (8 p.m. on ESPN2), Niang will need to score only three points to pass his old coach and Iowa State legend – Fred Hoiberg – to move into No. 3 on Iowa State’s all-time scoring list.

Niang’s 1,990 career points are the eighth most in Big 12 history. When he gets to 2,000, which statistically is almost a lock to occur tomorrow (Niang has scored in double digits in 34 straight games), Niang will join an elite group of 535 players to ever do so in the history of the sport.

He is charismatic. Georges Niang is the most beloved Iowa State student athlete I have ever covered.

— At 128 games played, it’s almost a lock that he will pass Melvin Ejim (135) to be the all-time leader in that category. Niang has started 116 games and is 10 away from passing his former teammate – Ejim – there too.

— Niang is currently fourth in career field goals made.

— He’s currently Iowa State’s 18th career leading rebounder and should easily jump to 12th in the next three games.

— He’s fifth in career 3-pointers made and should pass Hoiberg (he needs 11 more) by the end of the regular season.

— Niang has currently dished out the 10th most assists in program history.

The numbers are all great but there’s one thing that we all KNOW.

Niang is a Hall of Famer and will no doubt have his jersey hanging in Hilton at some point in time.

And this isn’t a latest = greatest situation either. Niang has literally been the most successful Cyclone in program history.

2 – To completely contradict everything that I just wrote, I do understand why you would want to wait a few years to do this. I think it is cool for fans – and players – to be able to come back after a few years when perspective has been gained and have that moment.

I’m more writing "do it now" to prove a point, which is just how special this guy actually is.

4 – Another interesting tidbit on Iowa State’s season as a whole: The five combined conference losses were by four, five, three (overtime), five and three (overtime) points. That’s five losses by a combined 20 points, with two overtimes.

5 – I am an idiot. When Kansas lost its third Big 12 game before the calendar changed to February, I really thought that Bill Self’s program’s streak was done.

WRONG. Kansas’ win at Oklahoma on Saturday was impressive and I fully anticipate the Jayhawks topping Oklahoma State by a good 20 tonight (8 p.m. on ESPN).

Kansas’ streak is about to be extended to 12, folks.

6 – How about Tech kicking Baylor’s but in Waco on Saturday? So perhaps Iowa State’s loss in Lubbock wasn’t that bad last week after all?

7 – I feel like the remainder of this basketball season is one big preface to what is awaiting us – Big 12 fans – this spring. It might get nutty.

The latest is this report out of Cincinnati that outlines that school’s plan – and politicking – to get into the Big 12.

If the league does eventually expand, Cincinnati (in my mind) is the only virtual lock.

What about BYU? This makes sense from a television/branding aspect but I’ve heard that the league doesn’t want to look west and that the football coaches don’t want their teams playing against 23 and 24 year olds every year.

Personally, I’d love to see UConn and Cincinnati, but I’m a basketball guy. Football wise, I’m not sure how much sense that makes.

This event has been awfully watered down for a while not but I thought its latest installment was one of the best in the last 15 years.