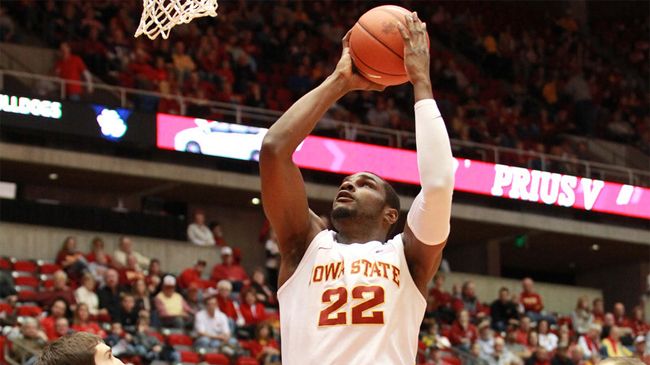 Pretty much every relevant NCAA Tournament guru in America has Iowa State in the Big Dance leading up to Saturday’s road tussle with West Virginia. Wednesday’s 87-76 victory over No. 13 Oklahoma State was a convincing one for many but even so, the Cyclone Nation would without doubt sleep better on Saturday evening and the nights leading up to the Big 12 Tournament with a win over the Mountaineers.

Iowa State defeated West Virginia 69-67 back on Jan. 16, a game that Fred Hoiberg said feels like occurred “two years ago” after Wednesday night’s victory. Think back to that game and you’ll remember that the Cyclones took a three point lead into the break, as West Virginia shot 0-for-10 from 3-point range in the first half. After starting 0-for-13 from long range, the Mountaineers fired back to hit 9-of-12 to end the game. According to Hoiberg, it wasn’t Iowa State’s fault either.

“They hit some bombs, I thought contested shots,” said Hoiberg. “I thought we kept to our game plan which was try to make them beat us from the perimeter and they almost did.”

The game ended with one of the most memorable moments of the season for the Cyclones, with Will Clyburn finding Georges Niang in the game’s final seconds to secure an Iowa State victory.

Now the obvious question after watching West Virginia hit those shots agains Iowa State in round one is, will Hoiberg elect to attack this one with the same game plan on Saturday?

“You’ve got to play the percentages and again, you’ve got to take the ball out of the paint,” said Hoiberg. “They will have the size and strength advantage on us in the paint. You’ve got to play your philosophies. If we play with the same urgency on defense that we did against Oklahoma State I think we will be fine.”

West Virginia enters this game on a five game losing streak with a 6-11 mark in the Big 12.

Iowa State is locked into the five-seed in next week’s Big 12 Tournament and will play either Oklahoma or Oklahoma State.

When one think of Bob Huggins basketball, the word “physical” usually comes to mind. The Mountaineers do have a few guys who can shoot the rock, but fundamentally, calling this team a polar opposite to Iowa State isn’t a stretch at all.

For Iowa State, combating West Virginia’s physicality and size down low is always an issue, especially when big men like Melvin Ejim just can’t seem to stay out of foul trouble. That’s why it is a very a good thing for Fred Hoiberg that senior Anthony Booker arguably played his best game of the season on Wednesday night.

“Book is our biggest and strongest guy,” said Ejim. “It is going to be great to throw him in there to battle with those guys. He is playing well on both ends of the floor. I am happy for Book and he will definitely help us out."

Booker played 15 minutes but only recorded one rebound in Iowa State’s first game against West Virginia. In Wednesday’s six rebound performance vs. Oklahoma State, Booker appeared to be a different man though.

“Booker was a huge key for us last night,” said Hoiberg. “I think the first possession he was in he had a blocked shot. He struggled with that, as far as protecting the rim this year. He had six big rebounds for us.”

The reason Booker is so critical stems from Ejim’s inability to stay out of trouble with the officials. Ejim, who is the Big 12’s leading rebounder, has recorded four fouls or more (and fouled out twice) in Iowa State’s last four games. He had three fouls a piece in the three games prior to that stretch.

It is very clear that opposing teams are gunning for the undersized Ejim in the paint.

“I know that. I am pretty sure that every team singles me out as the guy they want their best post player to post up against,” said Ejim. “It’s tough but we have a lot of help. Guys are helping me out and I’m doing the best that I can but it is kind of frustrating to get those fouls.”

And that really is the key. Ejim can’t continue to pick up the cheap ones.

“I thought that Melvin had a couple last night like the three that Smart shot at the end, he was in the wrong spot and kind of got off balance a little bit,” said Hoiberg. “He had another one way out on the perimeter that he shouldn’t have picked up. His fouls weren’t all inside last night. I thought that he picked up a couple of foolish ones.”

Ejim is a smart guy. He knows what he has to do but at this point in the season, how nice is it to have an option like Booker off of the bench? That’s especially true when you think about the possibility of facing another post-oriented team, Oklahoma, on Thursday in Kansas City.

Man, a win here would be huge.

It’d help eliminate that “Iowa State is terrible on the road” stigma that follows this team around.

It’d get Iowa State to 11 wins in the Big 12 and most importantly, would make it darn near impossible to keep the Cyclones out of the NCAA Tournament.

It’d give Iowa State a load of momentum heading into the Big 12 Championship.

Iowa State is playing with a boatload of confidence right now. I actually feel like the Cyclones learned something from that Oklahoma loss. That lackluster performance will be fresh on their minds while preparing for this one.

And West Virginia? The Mountaineers are just counting the days until this disaster of a season comes to and end.