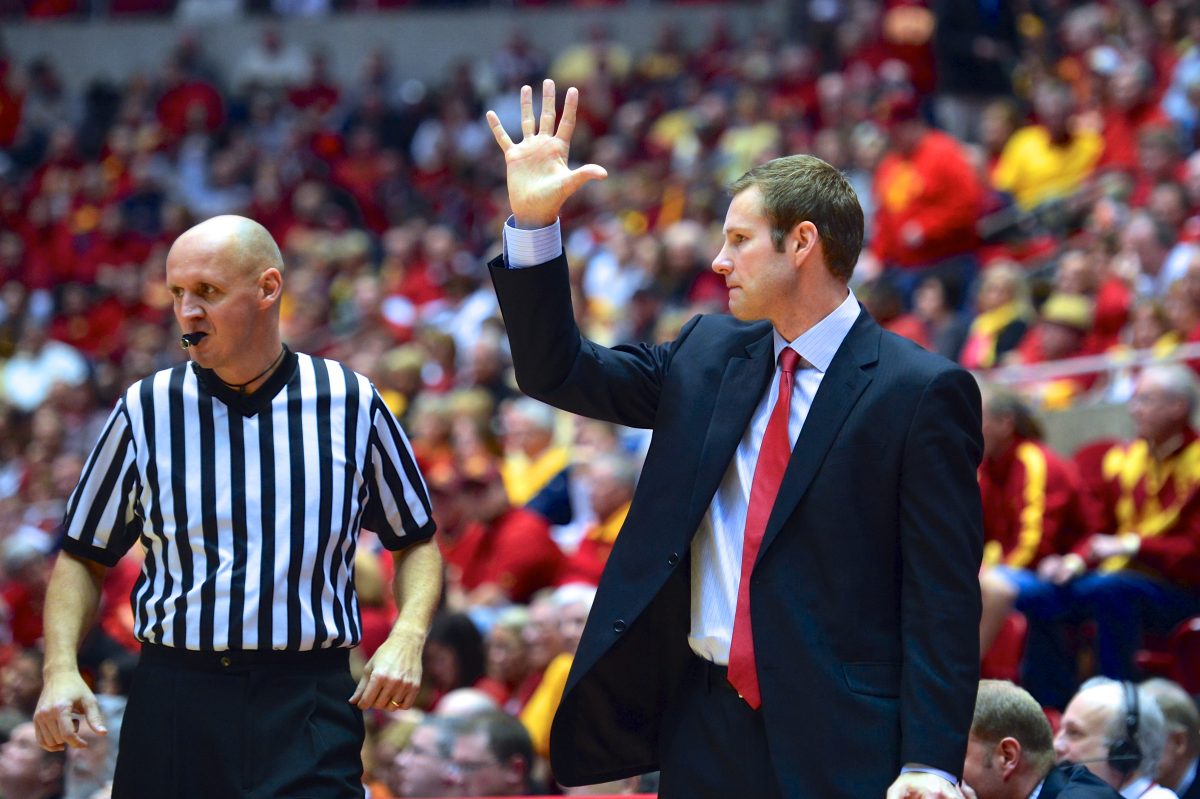 AMES — To quote the great Johnny Carson, that was some wild and wacky stuff.

In a battle of contrasting basketball styles, Iowa State and West Virginia put on an stone cold thriller for over 13 thousand fans inside of Hilton Coliseum on Wednesday night. Iowa State won the game 69-67 but this contest was full of ups, downs and rowdiness in between.

Early on, both teams contributed to turning a brilliant Hilton Coliseum atmosphere into Brick City during the games’ first 20 minutes. The Cyclones went 4-for-14 inside the arc during that time and were lucky to take a three-point lead into the half.

After the break, the Cyclones appeared to be on cruise control by going on an 18-4 run to open the second period. Iowa State actually stretched its lead to 18 points with nine minutes to play. Against a team that has struggled offensively as much as West Virginia has this season, 18 should have been enough to close this one out right?

“We had a game plan going in that we were going to pack it in and make them make shots. It worked to perfection,” said Hoiberg after the game.

“That’s what gave us a 17-point lead, was packing it in with our toes on the 3-point line,” said Hoiberg. “If they hit those shots you shake their hand. I’m thankful we got this win.”

The wildness didn’t end with West Virginia waking up, smelling the coffee and finally showing a pulse on offense. For a moment, Déjà vu was going through he minds of many. Iowa State had a three-point lead with less than 30 seconds on the clock. Do you foul? Don’t foul? Sound familiar? Oh boy…Not this again…

Jabarie Hinds tied the game at 67 via a 3-pointer and with 11.5 seconds to go and Iowa State had one shot to put it away.

“Coach called a timeout, drew up a good play and we executed it,” said senior point guard Korie Lucious.

The plan was to isolate Will Clyburn.

“We wanted Georges (Niang) to slip out of there. They had been switching a little bit to cause some confusion. Both guys ended up going with Will,” said Hoiberg. “I didn’t think that he saw Georges at first but then he made a heck of a play to find Georges in there all by himself.”

Niang kissed it off the glass with 2.5 seconds to go. West Virginia never got a shot off and as a result, the Cyclones are 2-1 in Big 12 play heading into Saturday’s road trip to TCU.

Melvin Ejim – Earlier in the week, I had a conversation with a friend about how Melvin Ejim might be the most under-appreciated Cyclone of my generation.

Note to self: This guy isn’t going to be under-appreciated for very much longer. Ejim recorded his seventh double-double of the season by dropping 16 and 13 on the Mountaineers

“Melvin did everything for us,” said Hoiberg. “Especially when Melvin can step out there and knock down shots. That makes us pretty difficult to defend.”

Ejim’s three 3-pointers tied a career-high for the 6-foot-6 junior. His outside shooting was especially critical due to the fact that Iowa State’s two best shooters, Tyrus McGee and Chris Babb combined to go 2-for-12 from downtown.

“We needed Melvin to step up and he certainly did that,” said Hoiberg.

They still won – You never like to give up an 18-point lead at home in nine minutes but it could have been worse. Iowa State could have easily lost that basketball game. Ejim said that the team will use this as a learning experience.

“When you’re up like that and a team starts hitting shots out of nowhere, you’ve got to keep in mind that can happen on any night,” said Ejim. “You’ve got to close out teams. That’s something that this game and other games have shown us. We’ve got to go back in and start working and do what we can do make sure we play for 40 minutes and do everything that we can.”

It’s better to learn lessons after wins than what could have been the case is it not?

Turnovers – Iowa State turned the basketball over five times in the first eight minutes of the game but really calmed down after that. The Cyclones ended the evening with 13 but I’ll take that against a team that plays as physical as West Virginia does (which is generally a bad match-up for this Iowa State team).

Korie Lucious’ 8-to-4 assist-to-turnover ratio was solid. It wasn’t pretty early but the Cyclones cleaned it up when they had to.

SportsCenter – Cy sinking a half-court shot during warm-ups and a Will Clyburn jam both made SportsCenter’s top 10 from this game.

It marked only the third time this season that the Cyclones have been out-rebounded by an opponent.

None – You know the rule. Only two-downs for conference home wins.