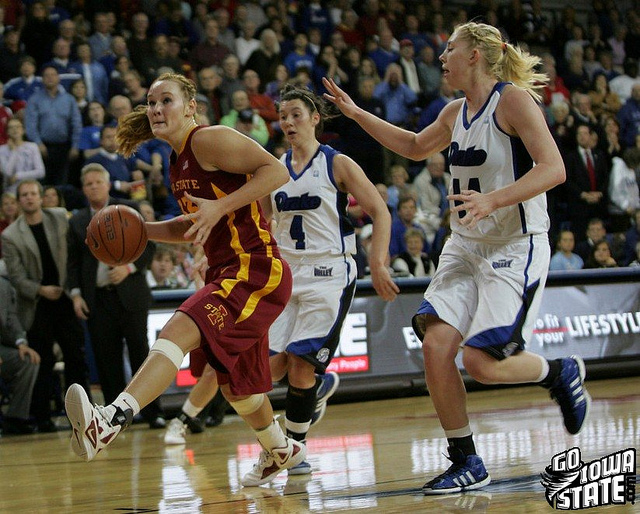 At least during a decisive stretch in the second half.

Ignited by its long range shooting, Iowa State ran No. 17 Texas Tech out of Hilton Coliseum on Sunday. The Cyclones (10-7, 1-5) routed the Lady Raiders, 66-49, to secure a much-needed conference victory.

A defensive battle quickly turned in Iowa State’s favor when the Cyclones morphed into a deadly 3-point shooting team like year’s past. Iowa State led 29-26 with 16 minutes to play. Less than five minutes later and it was 46-29.

“We finally got open in transition,” Iowa State coach Bill Fennelly said. “We spread the court a little bit. We tried to go inside-out.”

The scoring flurry started when Chelsea Poppens muscled in an offensive rebound for two. Lauren Mansfield poured in eight-straight points on the Cyclones next three possessions. The senior’s second 3-pointer gave Iowa State a 39-26 advantage.

After Mansfield’s burst, it was Hallie Christofferson’s turn to take over. The Hamlin native swished three second half treys, the last of which pushed the Cyclones lead to 58-39.

Christofferson played perhaps her best game of the season on Sunday. She entered Sunday’s contest averaging 5.4 points in conference play. The sophomore finished with 19 against Texas Tech, including a career-high five 3-pointers.

“After the first one, I guess I got a lot more confidence,” Christofferson said. “Then I found myself open more than usual. I just looked for my shot more. Sometimes I didn’t have my feet set, but I let it fly.”

The victory meant a lot after the game in a trying season.

“It’s hard to be 0-5 and hear some of things you hear,” Fennelly said. “I don’t care what people say about me, I’m used to it. But the kids were having a tough time. They are trying, playing hard. I thought we played great today.”

Consider the slump busted. Hallie Christofferson is back to her normal efficient self on offense.

All it took was a little extra work in the gym. After practice on Friday, Christofferson spent time shooting jumpers. It paid off.

The sophomore scored a game-high 19 points on Sunday to provide a much-needed spark to help the Cyclones to their first conference victory of the season.

“I didn’t have the best practice (on Friday), so I wanted to make up for it afterward,” Christofferson said. “I guess it worked.”

Christofferson showed a nice touch from outside, barely drawing iron on her career-high five 3-pointers. Not only that, she aggressively fought for loose balls and grabbed 10 rebounds.

Christofferson and Mansfield’s improvements are huge for Iowa State’s goal of postseason play.

“Lauren’s 3’s in transition and Hallie trailing were big offensive plays to go with the energy and enthusiasm Poppens was giving us in the defensive end.”

Iowa State assistant coach Billy Fennelly likes to highlight three keys to victory before each game. On Sunday, they were 1.) Limit Texas Tech in transition. 2.) Get to the free throw line. 3.) Take care of the basketball.

The Cyclones nailed all three keys en route to the big win.

Iowa State hit on goal two by going 19-of-24 from the free throw line, outscoring the Lady Raiders at the stripe by seven points.

The Cyclones went 3-for-3 on Fennelly’s goals by recording more assists (15) than turnovers (14). Freshman Nikki Moody did her best to help Fennelly by notching seven assists against two turnovers. Moody also scored nine points and grabbed seven rebounds to stuff the stat sheet.

Coaching 17 years in the Big 12 doesn’t buy you many favors, apparently. Bill Fennelly and his Iowa State squad continues its brutal slate of games with a trip to Kansas State on Wednesday.

The Wildcats will enter the tilt with a 13-5 record and a 4-2 mark in conference play. On Saturday, Kansas State lost at Baylor 76-41. 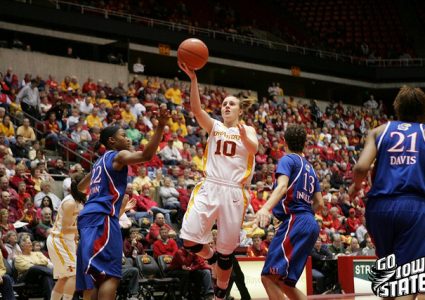