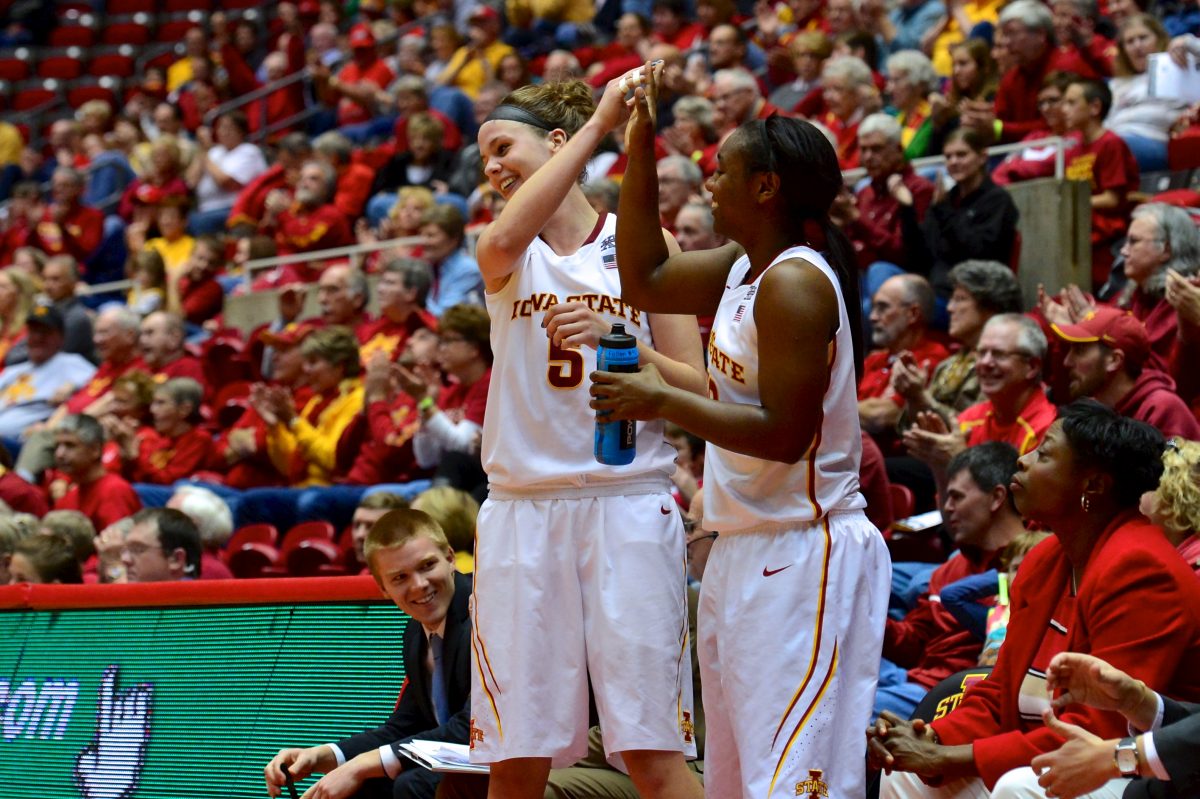 AMES – How good is this Iowa State team? Even in a ho-hum offensive performance, the Cyclones can destroy a Big 12 opponent.

It helps that Hallie Christofferson wears the Cardinal and Gold. The senior’s dominant performance led to a 74-48 victory at Hilton Coliseum on Wednesday.

The win improved the No. 11 ranked Cyclones to an all-time best 14-0 to start the season.

“Hallie was really, really good as always and I thought the other kids found a way to contribute,” Iowa State coach Bill Fennelly said.

Texas Tech (6-8, 0-3) did little to help itself. The Lady Raiders looked exactly like a team who averages 46 points per game and lost to Abilene Christian.

More stunning, Texas Tech and first-year head coach Candi Whitaker opted to guard Christofferson straight up instead of double-teaming her.

Christofferson ignited a Cyclones run after a sluggish start, scoring at will in the lane. The Hamlin native tallied 17 points in the first half alone on her way to a game-high 22. She didn’t miss a shot until there were two minutes left in the opening half.

After “thinking too much” the past couple of games, Christofferson played stellar basketball against the Lady Raiders.

“It gives you a little more confidence when you make your first two (shots) and get things rolling,”  said Christofferson, who made her 100th career start.

Behind Christofferson’s heroics, Iowa State blitzed the Lady Raiders, ending the first half on a 22-4 run on the way to the blowout victory.

“The first half, (Christofferson) had no help,” Fennelly said. “Luckily, I think she outscored them in the first half.”

The scoring spurt started after a Seanna Johnson put back for a 21-14 lead. Christofferson hit consecutive buckets inside to make it 25-14.

Kidd Blaskowsky punctuated the run with a pair of 3-pointers for a 35-14 edge.

The Cyclones weren’t sharp after the break, but they did enough to hold on to the big lead. Johnson’s driving layup gave Iowa State a 46-27 advantage. Next, Christofferson and Nikki Moody both drained 3-points to end any slim hopes of a Lady Raiders comeback, especially with the way the Cyclones’ defense was playing.

“Attention to detail on every single person was key.”

Iowa State hosts No. 15 Oklahoma State on Saturday at 6 p.m.

Hallie Christofferson is enjoying one of the best individual seasons in Iowa State history. You wouldn’t know it from talking to the Cyclones’ star.

Christofferson prefers to credit her teammates and coaches. That’s OK, her play speaks plenty loud. The senior outscored Texas Tech in the first half by herself, 17-16.

“I thought Hallie a great first half,” Texas Tech coach Candi Whitaker said. “We didn’t necessarily do a good job on her.”

A lot of teams are saying the same thing. On Wednesday, Christofferson flashed the skills that make her an all-Big 12 player. During the first half, she soared over two Lady Raiders for a rebound and tough basket. Later, she went outside and connected from long range.

It’s that unique skill set that makes Christofferson so hard to guard. This season, she is averaging 21.1 points and 7.7 rebounds.

“I thought for about 14 minutes, literally she was playing by herself,” Fennelly said.

“She was hunting her shot and playing pretty good.”

Cyclone fans better appreciate Christofferson’s brilliance. There are so many mores times she will suit up for the Hilton crowd.

–       Entering Wednesday’s game, the Cyclones ranked third nationally in 3-pointers made per game (10.6).