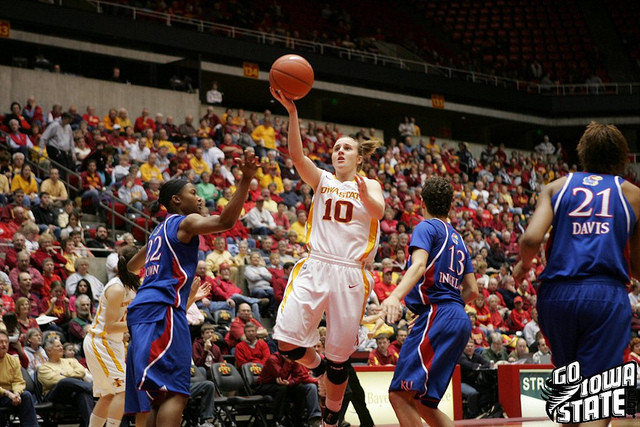 Ames – It wouldn’t be surprising to see Chelsea Poppens come out wearing eye black some game.

Following the lead of its tenacious teammate, Iowa State (13-8, 4-6) destroyed Texas in the second half on Saturday afternoon, routing the Longhorns 71-56.

“I don’t know if I’ve ever seen a performance, unless it was a NBA game on TV, like what Chelsea Poppens did in the second half,” Iowa State coach Bill Fennelly said.

That’s because Poppens dominated. Despite battling foul trouble, she scored a career-high 27 points – 20 in the second half – and grabbed 10 rebounds in just 24 minutes.

“She is a great teammate,” Fennelly said. “She’s in foul trouble and she is the biggest cheerleader on the bench. She doesn’t sulk. She goes into the game, and she takes over the game.”

After a sluggish first half, the Cyclones trailed 31-27 but they came out of the locker room and took control. Anna Prins scored two buckets to give Iowa State a 40-38 lead.

Next it was Poppens’ turn. She scored underneath the hoop for a 42-40 edge. Later, Poppens used a strong move inside for a traditional three-point play and a 49-40 advantage.

“I told my post coach, ‘I want my post players to watch this tape and learn how to work hard,”’ Texas coach Gail Goestenkors said.

Poppens’ onslaught continued when Lauren Mansfield found her for an easy layup and a 59-45 lead. Iowa State extended its advantage to 63-47 minutes later when Poppens scored off a nifty inbounds play.

“You could tell (Texas) was frustrated,” Poppens said. “It was in the air.”

Hallie Christofferson pushed the Cyclones in front 68-49 with a 3-pointer to punctuate the big win. Christofferson struggled at the start of Big 12 play, but now she is a consistent threat from deep. On Saturday, the Hamlin native drilled five 3-pointers and scored 17 points.

“Poppens and I stay after practice and shoot extra shots,” Christofferson said. “That’s helped me.”

The win keeps Iowa State in the postseason hunt. The Cyclones are now 4-6 in the Big 12 and their RPI – which was 54 entering Saturday – continues to rise with each victory.

Chelsea Poppens was simply unstoppable in the second half on Saturday. Her all-out effort led to easy buckets in the paint and the Cyclones turned a four-point halftime deficit into a 15-point win.

“We had so much energy in the second half,” Poppens said.

When Poppens gets rolling like she did Saturday, everything becomes easier for the Cyclones. With Texas paying extra attention to Poppens inside, Christofferson hit wide open 3-pointers.

Saturday marked the fourth time in the last five games Poppens has scored more than 20 points. She is averaging a double double this season with 14.9 points per game and 11.3 rebounds.

Mansfield makes it easy on teammates

Glancing at the stat sheet, it looks like Lauren Mansfield struggled on Saturday, shooting 1-of-10 from the floor. In fact, it was just the opposite.

Mansfield may have played one of her best games of the season against Texas. The senior finished with 11 assists against only one turnover.

“For her to see the whole court and see the open players, it helps us play better as a team,” Poppens said.

Instead of pouting because her shot wasn’t falling, Mansfield instead found her teammates for easy buckets.

“If I was Chelsea Poppens, I would be buying dinner for Lauren Mansfield tonight,” Fennelly said.

It’s becoming commonplace for Iowa State to completely shut down the opponent’s best scorer. On Saturday, Texas’ Chassidy Fussell scored only three points. She came into the game averaging 17.

Give most of the credit to Chassidy Cole.

“At the shoot around this morning, I told (Cole) I didn’t want a shot off in the first four minutes,” Fennelly said. “That’s exactly what happened. We made her work for everything.”

Bill Fennelly on the crowd“Our fans worked as hard as our players did. The magic in this facility has always been attached to the men’s team. There was a little of it for our team today.”

“I have a file of very nasty emails that I’m saving that I haven’t shared with any players. But Jamie (Pollard) texted me everyday, kept emailing, ‘You’re fine. Keep working at it. You’re going to get better.’ That meant a lot to all of us.”

–       Chelsea Poppens has five games this season with 15 rebounds or more, and has accomplished the feat nine times in her career.

–       Poppens’ moved into a tie for seventh place all-time at Iowa State in rebounds on Saturday. The Aplington native is now knotted with Megan Ronhovde with 710 career rebounds.

–       Nikki Moody notched five assists on Saturday to move into second place on Iowa State’s freshman assist record. She has 92 assists so far this season.

The Cyclones will take their winning streak on the road on Wednesday when they square off against Missouri. The Tigers (10-10, 0-9) are still looking for their first conference win.

Christine Flores (18.1 points per game) and BreAnna Brock (14.6 PPG) can both do some damage, but the Tigers lack a third threat. 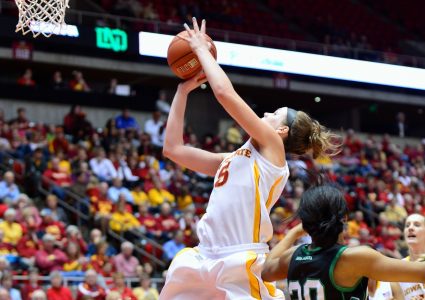