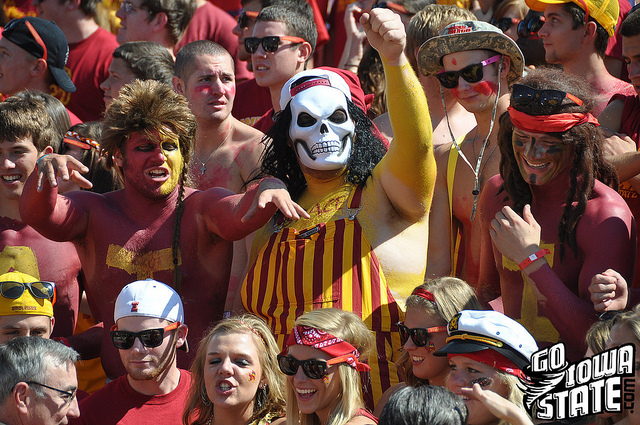 For the record, I have no idea who that crazy man in the mask is in the above picture. But I wanted to give him props for being such a nut. Because of this, he’s on the front page of CycloneFanatic.com.

I had to push my musings back a day this week. Yesterday was insane.

*** I got to chatting with a few fanatics on Saturday morning before our pregame show. I had a nice conversation with some Iowa State students. Three of them were Clone to the bone. The other was wearing Hawk gear.

"I go to Iowa State, but root for Iowa," said this wise guy. "I only cheer for winners."

If you don’t mind, I’m going to quote WWE Superstar The Miz…

*** As all of you know, the Cyclones have a Friday night date with the defending Big East champs UConn this week. All everybody (media) talked about at the Jacobson Building yesterday was the potential for a Hawkeye hangover. If you’re over the age of 21, you know that those are the worst…

Here’s why I don’t believe that is going to go down this week.

Paul Rhoads has examples to show his team. The 25-point loss to Texas A&M after defeating Nebraska in 2009 comes to mind. The 41-point thumping to Utah after beating Texas Tech in 2010 is an obvious one. The first half hangover against a terrible Kansas team after winning in Austin last year is an example as well.

As my Cyclone Reaction co-host Jack Whitver put it after Saturday’s win, Paul Rhoads is too good of a motivator to let this team sleep walk into Friday night.

I’m not guaranteeing a win. But I’ll be surprised if the Cyclones aren’t prepared play the Huskies on national television.

*** Last Friday, things looked to be heading into a positive direction in regards to the Big 12’s future. Today, not so much.

Want peace of mind? Nobody can give you that right now, but I will say this.

Did you see that crowd at Jack Trice Stadium last Saturday?

I don’t think so…

MY TOP 5 TO WATCH THIS WEEKEND…

I love these Friday night Cyclone games. That means that I don’t have to work on Saturday! I’ll be able to watch more college football this weekend than the last two combined. Here my top five games to watch this weekend.

5 – Pitt @ Iowa – How does this Iowa team rebound? From an Iowa State perspective, I hope that they win. It will make last Saturday look a lot better.

1 – Oklahoma @ Florida State – I’ll be chop, chopping away in my basement with a Busch Light in hand. I don’t really see the point in cheering for other Big 12 teams anymore.

*** Believe it or not, basketball season is right around the corner. Women’s basketball media day is on Oct. 4. The men will host theirs on Oct. 12.

*** One more note on hoops. If you didn’t see this yesterday, the men’s basketball schedule released its tip times along with television information. CLICK HERE to check it out. I added up eight games that will be shown on ESPN, ESPN2 or ESPNU.

*** Kevin Harvick is my pick to win NASCAR’s Chase for the Sprint Cup.

*** How bad was Donovan McNabb on Sunday for the Minnesota Vikings? Minnesota’s offense looked like Iowa State’s in 2003. Yikes!

*** I’m pumped up for tonight. I have a date with my wife to watch the season finale of "Bachelor Pad." For real – That’s the best show on TV. 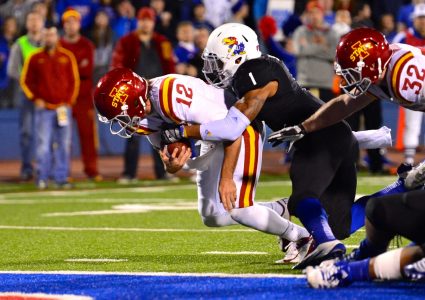