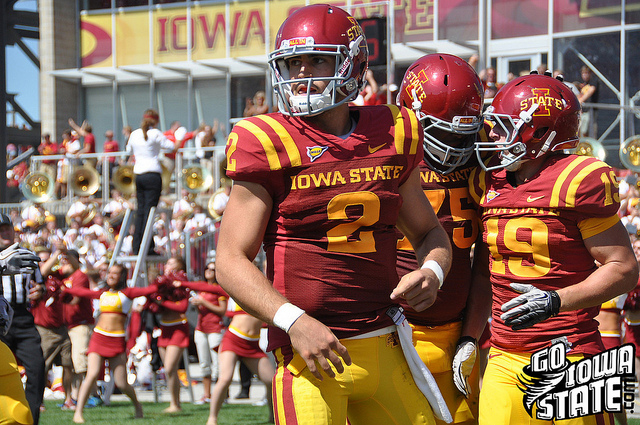 We are only two games into his Iowa State career, but Steele Jantz has already created a legacy. Now before we go any further, let’s step back a bit. By no means am I advocating for the Iowa State athletics communications staff to begin the "Give Jantz a Chance" Heisman campaign. That’d be as premature as buying a wedding gift for the Jersey Shore’s Ronnie and Sammi.

In the history of Iowa State football, there haven’t been many encouraging memorable moments. In my cognitive lifetime, I can name a handful that still resonate in a positive fashion. Seiler’s gallop against Nebraska in 1992. The Sage to Danielsen slant to beat Oklahoma State in 2000.  Billups’ punt return to clinch the Insight.com Bowl in 2000. Shaggy’s field goal to beat Iowa in 2007. And of course the most vivid of them all, "The Run" by Mr. Wallace against Texas Tech in 2002. (This leads to one of my favorite Iowa State jokes: How many Cyclone fans does it take to screw in a light bulb? Four. One to screw in the light bulb and the other three to talk about how good Seneca Wallace was.)

Sure there have been other great plays in Cyclone history. But the five above belong on the extended Mt. Rushmore of Cyclone football plays.

Bottom line, Iowa State doesn’t exactly have a glowing history of uplifting moments. They’ve been kicked in the groin enough times that the worst is assumed.

That’s what makes the first two weeks of the 2011 season so startling. Both games have been high-drama and it’s been Iowa State that has emerged victorious. They’re not supposed to win games like this.

In fact, Iowa State hasn’t won back-to-back games by three points or less for the first time since October 15, 1938.

That 1938 Cyclone squad was a pretty salty bunch. They went 7-1-1 led by ‘fellas named Ed, Everett, Clyde and Charles. To give you a better idea of time, two weeks after the ’38 squad squeaked out a 16-13 win at Missouri for their second straight win of three points or less, Seabiscuit defeated War Admiral in their famous match race. The next spring, The Wizard of Oz debuted in theatres. And that summer, Joe Paterno turned 54. (Okay…the last part is not true. JoePa was only 13.)

All Jantz has done is lead Iowa State to comeback wins in his first two games in Cardinal and Gold. He has made clutch play after clutch play. As one of my friends said after the game, "Steele is carrying around a set of beach balls."

Jantz has led Iowa State to score six touchdowns in their last six drives in the fourth quarter and overtime periods.

After the UNI game, I struggled to think of the last time Iowa State had a late game winning drive. And for good reason. It hasn’t happened very often.

Only four times since 1993, (I gave up after 1993, it could very well be longer….going thru the ’90’s game logs was depressing) could I find a time where Iowa State came back and won a game they trailed in the last five minutes of regulation:

2004@ K-State — The Cyclones scored three remarkable touchdowns in the final three minutes to beat the Wildcats 37-23.

Only four times in 18 years have they come back to win a game in the last five minutes. Yet, here we are two games into the ’11 season and Jantz is 2-for-2 in comeback wins.

And he has done it in true California fashion. In those two games, Jantz is 5-for-5 on fourth down conversions with two touchdowns. On Saturday against Iowa, the Cyclones were a combined 15-of-22 on third and fourth down conversions. A conversion rate so ridiculous that it would make Wilt Chamberlain jealous (or so the legend goes.)

As a caller to the Cyclone Reaction post-game show astutely pointed out, Jantz has that mythical "it" factor.

It reminds me of this loosely interpreted  quote from Supreme Court Justice Potter Stewart in the 1964 Jacobellis vs. Ohio case: "I don’t know what it is, but I know it when I see it." (Granted, Justice Stewart was talking about censorship in pornography, but I think that definition somehow works here as well.)

Or to bring things into modern times, as the kids would say, Jantz has some "swag." And yes I feel really old for using that word. I had to check Urbandictionary.com to make sure I had the definition correct. New rule: Nobody over the age of 25 can use "swag" in everyday conversation. Same goes for the phrase "hot mess." That said, I’d love to hear John Walters drop a, "Jantz has his swag on full attack against UCONN tonight! He’s got the Husky D in a hot mess!" Make it happen Johnny Jams.

Anymore in sports,  fans and media are too quick to anoint newcomers as the next best thing and bestow hyperbole in large doses. I’m as guilty as anybody.

Right now Steele Jantz can do no wrong. That is going to change. It is inevitable. He can’t continue to convert every fourth down. The hype will die down. The adversity will come. How he deals with that adversity will be his lasting legacy.

But for today, enjoy the moment. The riveting drama that we all experienced the last two weeks doesn’t end in Iowa State’s favor very often. There aren’t many advantages to being an Iowa State fan. But one thing is for sure, the celebration is always sweeter when you aren’t expecting it. And Steele put on an unexpected show that will be remembered for years to come.

Just like Billups, Seiler, Sage, Shaggy and Seneca; Steele now has his place. 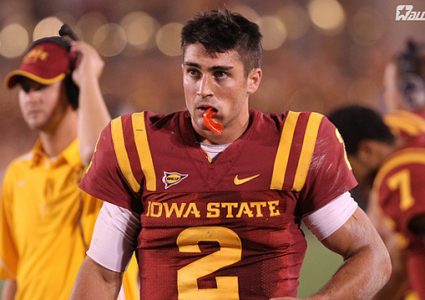 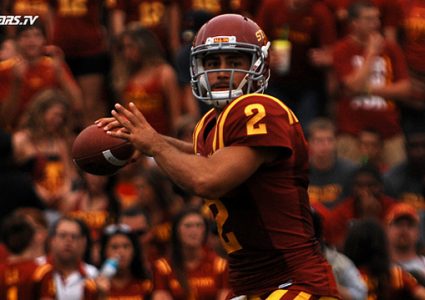