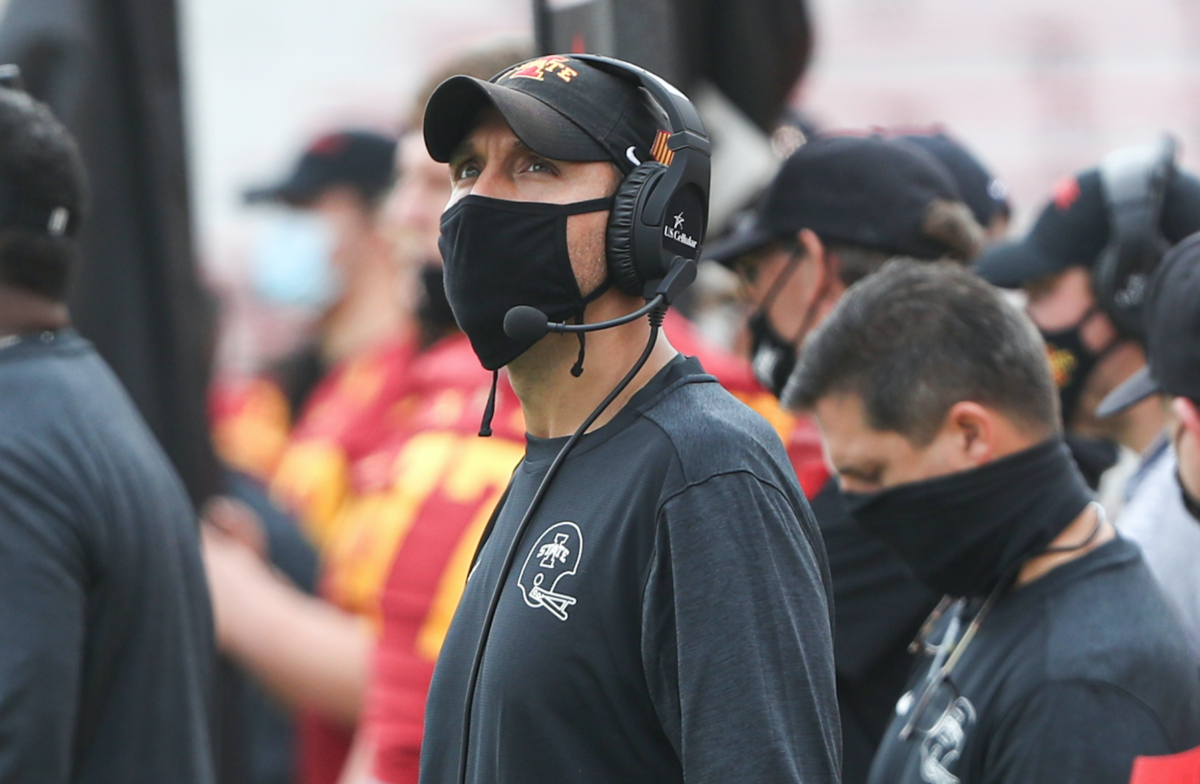 I have now watched Iowa State’s 31-14 loss to Louisiana three times (I’m sick, I know). I’ve just been racking my brain trying to figure out what in the heck happened.

But last week, I realized that this is my 16th year of covering Iowa State football for a fan site. I started with Scout and the old Cyclone Nation back in 2004. I worked for Rivals and Cyclone Report for a while before heading on over to CF in 2009. With that experience, I have gained considerable perspective on how many fans deal with the highest of highs and the lowest of lows when it comes to their favorite team.

For what it’s worth, I realize that Iowa State isn’t your guys’ favorite team. It is your passion and in your blood.

When things are good, fans are generally all on the same page. We are all in this together. The CyclONEnation is the most loyal fan base in the country and we support our team good or bad.

However, when things take a turn – as they did in an unfortunate way on Saturday – the fan base tends to split down the middle. It’s a bit of a microcosm of our country these days, but I don’t want to accuse either side of being Democrats or Republicans (how dare I), so let’s go with the “bulls” and the “bears.”

The bulls are optimistic. It’s a long season. Things will be fine. Our players are working hard and the coaches are some of the best in the country. Keep the faith! The bulls accuse the bears of being rotten fans and insist that Iowa State is better off without them.

The bears want people fired (including me for over-hyping up the team in the offseason. The loss is my fault.) They pay their hard-earned money to support Iowa State athletics and expect results, damn it. The bears accuse the bulls of accepting mediocrity. The bulls – according to the bears – are the reason ISU is in this mess in the first place following years and years of complacency.

It is so predictable.

But, as is the case in nearly every situation, the middle is where the truth lies.

So looking back at Iowa State’s surprising 17-point loss to Louisiana, I’m going to play “good cop” and “bad cop,” making a case for the bears and the bulls, with a true middle ground reflection on the current state of Iowa State football at the end.

I’ll tack on some general musings at the end.

Let’s start with the positives from Saturday and yes, there were some.

We have seen this before: For some reason, Matt Campbell teams have not come out of the gates strong during his time at Iowa State. In his five seasons at the helm, Campbell is 2-3 in openers and 0-5 against Iowa.

Before you ask, I don’t know why. Clearly, neither does Campbell. The above facts are not lost on the program. But there is another obvious trend that if it holds true in 2020, we will all realize that this is not the end of the world as we know it.

Under Campbell, the Cyclones always seem to respond. Even the 3-9 year to start his era, Iowa State was significantly more competitive to end the season than it was at the start – including a 66-10 beatdown of Patrick Mahomes and Texas Tech.

Under Campbell, Iowa State is 10-1 in the month of October over the last three seasons.

Obvious talent: I still think that this is the most talented Iowa State football roster – top to bottom – that I have ever covered. I’m factoring in recruiting rankings, size, proven track records, etc.

The defensive line is going to be an absolute monster for opponents to deal with this season. We saw a lot of reason for excitement there on Saturday with the emergence of Latrell Bankston and Joshua Bailey in the middle, while JaQuan Bailey and Will McDonald were absolute monsters on the outside.

On the other side of the ball, I can actually make a point that at 4.5 yards per carry, the offensive line showed great progress in the run-blocking aspect of the offense. Granted, they obviously struggled in pass protection mightily when Trevor Downing left the game.

Iowa State spent the second half without its two starting guards (Downing and Robert Hudson, who missed the game due to injury).

Brock Purdy will be fine. That was the worst game of his Iowa State career but I have full faith that he will bounce back.

Louisiana is good: Let’s not act like the Cyclones just dropped one at home to a bad Kansas team or something. Louisiana very well could go 10-0 this year while winning the Sun Belt.

Everything is weird: It’s the same for both sides but ask anybody who was at Jack Trice Stadium on Saturday and they will tell a sad, similar story regarding the atmosphere. The spirit squad can only do so much when players are used to having one of the best home-field advantages in college football.

There is a real problem with the offensive scheme: The one stat I can’t get out of my head from Saturday is the fact that Iowa State averaged 4.1 yards per pass attempt.

On top of that, the Cyclones didn’t net a single play of 20 yards or more in the opener.

Iowa State’s longest play from scrimmage – a 19-yard reception by Xavier Hutchison – was a Brock Purdy throw into triple coverage.

The wide receivers not only couldn’t catch passes when they got hit in the hands, but they rarely got open.

Breece Hall’s fumble came at a crucial time when the Cyclones were gaining momentum and Purdy has been very ordinary in his last three starts.

These slow starts: I get that Big 12 play is really what matters (and I will always take winning in October compared to September), but how is the program ever going to take the next step if it takes the Cyclones an entire month to get up to full speed? Why is this still a problem in year five? What is the actual issue here?

Special teams woes: Iowa State hasn’t been great here for some time and it probably cost the Cyclones the game on Saturday, giving up kick and punt returns for touchdowns in the loss. It’s tough to win that way.

Was Louisiana that good?: I told Bret Meyer during our halftime show that I was very underwhelmed by the Sun Belt favorites. I think that is a solid football team but not better than what Iowa State will see week-to-week in the Big 12.

All of the above can be true to an extent.

Like it or not, based off of track record, Iowa State should improve greatly between Saturday’s opener and Sept. 26’s road trip to TCU.

Unless you were hanging on the hopes of a College Football Playoff appearance, the Louisiana upset can be shaken off over the next nine games.

It still stings and fans should still be upset.

But I see the talent. Campbell turns things around every year.

I’m thinking that will once again be the case and that Iowa State is still going to have a very nice football season.

Congratulations to the players: Lost in the negative outcome of the game, I really think we need to acknowledge the personal sacrifice these players (in all sports) have made to even get to the point of competition that they did on Saturday. The last six months have been hell for everybody but imagine being in college and asked to go to and from practice, to not socialize and basically keep your head down 24/7, 365. It takes some real personal discipline. Lost in the upset, was the biggest upset – that this game actually took place. So here’s a tip of the cap to that.

On the Pollard interview: Last week’s Cyclone Fanatic Podcast with Jamie Pollard might have been the single most polarizing interview in the history of our publication.

For what it’s worth, I had no idea what I was getting into when Jamie and I started recording. My plan was to help fans understand the C.Y. Stephens connection to the athletics department and try to shed a little bit more light on what happened between Iowa State’s 25,000 fans announcement and not allowing any fans at all.

My take on why it got so much response is simple: It’s because, in a world full of so much bullshit (pardon me), fans were refreshed to hear a leader speak with so much authenticity. Even if you didn’t agree with what Pollard had to say, you have to respect the man for acting on his convictions.

I know that I respect that.

If more people just told the truth in this world and said what they actually believed, we would be in a much better spot as a country.

On the Big Ten’s pending announcement: It sounds like the Big Ten is going to be kicking off its season in mid-October.

I, for one, am happy about this.

Last Saturday was great. I was grateful to have college football back. But it wasn’t the same without all of the leagues playing.

No offense to the Big 12’s lovable Kansas Jayhawks, but KU vs. Coastal Carolina “after dark” just doesn’t have the same appeal to it compared to our friends out west in the Pac-12.

Figuring out the College Football Playoff is going to be a mess but you know what? Everything is a mess right now. I am just elated to have actual football to talk about.

So that’s a big positive to take into the bye week.