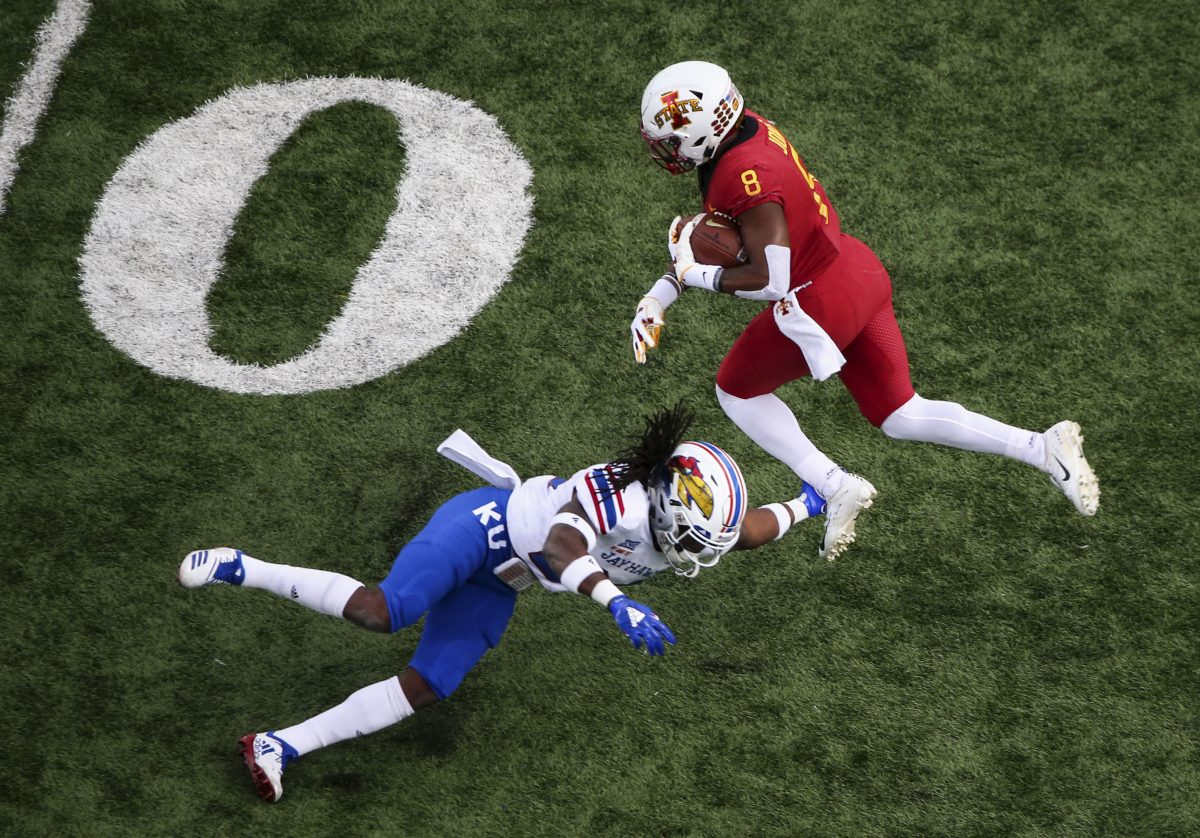 It wasn’t very long ago when honest to God, I did not believe it was possible for Iowa State to win a Big 12 championship in football.

The new round-robin setup of a 10-team league was daunting. Being the northern post of the Big 12, Iowa State is at a major recruiting disadvantage in a state that generally doesn’t produce many high-level athletes. You’re competing with Iowa to land the few that do pop up.

I always believed that Iowa State’s rabid fan base gave the Cyclones a fighter’s chance, but before Matt Campbell got to town, we had never seen the type of consistent recruiting necessary to legitimately put this program in the conversation.

Iowa State hasn’t had a player get drafted in the first round of the NFL since George Amundsen in 1973.

In David Montgomery and Hakeem Butler (who to his credit was a Paul Rhoads recruit), Iowa State might have two first-round draft picks on its team right now.

As I wrote two weeks ago, what’s happening in Ames right now is not only exciting, it’s sustainable. This isn’t some gimmick system built to do more with less. Iowa State is playing people straight up and beating them physically. The Cyclones boast what I believe to be a top 10 defense in the sport with a true freshman quarterback that is mature beyond his years. The recruiting that’s going on is Midwest focused, using other pockets of the country (Arizona, Texas and Florida) to supplement.

This “process” Campbell always talks about is a helluva thing. Go ahead and inject it into my veins.

Kansas was a gimme and now the real work begins.

The Cyclones enter Saturday’s 2:30 (FS1) kick vs. Baylor as a 14-point favorite with everything to play for over the next three weeks. As Matt Campbell asked his team during halftime of the Texas Tech game, “Are you contenders or pretenders?”

I like to think that I watch as much Big 12 football as anybody. My vote: Contender. I think that right now, Iowa State is the second best team in the Big 12, behind Oklahoma.

10 Thoughts on All Things Iowa State

1 – Baylor is an interesting foe. The Bears upset Oklahoma State over the weekend. After winning only one game in Matt Rhule’s debut season as head coach, Baylor is one win away from being bowl eligible for the first time since the Briles-era scandals rightfully brought the program down.

If you study the numbers, the Bears don’t really do anything that well. The thing is, they aren’t bad at any specific aspect of the game either. The Bears are an average football team that has just enough Texas talent to make things interesting on any given Saturday.

2 – Baylor is 0-3 in Big 12 road games this season, most recently being blown out by West Virginia 58-14 on Oct. 25. The current weather forecast for Saturday is cloudy with a high of 36 degrees. Baylor’s 35-31 win over Oklahoma State this weekend was significant because it was its first over a decent team. Baylor’s other four victories this season came at home over Abilene Christian, Texas-San Antonio, Kansas and Kansas State.

3 – In case you are wondering about Iowa State’s path to the Big 12 Championship Game on Dec. 1, here’a quick rundown: Iowa State has to win out to qualify. The best chance for the Cyclones to make the title game is for Oklahoma to beat West Virginia on the final week of the regular season. Should that happen, Iowa State would face the Sooners in the Championship game. Dylan Montz from the Ames Tribune gave a very concise rundown of the scenario here, which I encourage you all to read.

4 – Few things annoy me more than when fans say “TAKE IT ONE GAME AT A TIME” to other fans. Yeah, the team has to do that but there is nothing wrong with Iowa Staters being excited about exploring the possibilities ahead. Soak these good times up, Cyclone Nation.

5 – If you’re into this sort of thing, Iowa State is 24-6-1 against the spread vs. other FBS opponents during the Matt Campbell era. Insanity.

6 – I was surprised that we didn’t see Re-al Mitchell on Saturday. With the Zeb Noland transfer news breaking last week, I thought Campbell might use the comfortable lead as an opportunity to get Brock Purdy’s fellow true freshman some reps. Perhaps Campbell has something up his sleeve and wants to save Mitchell for the final four games of the season?

8 – Men’s basketball tips off tomorrow night and other than the transfer infusion of 2011, I’m not sure if I have ever been more intrigued by a roster than the one that Steve Prohm has put together for 2018-19. There’s so much talent, but a lot of questions too. I’ll say this: If Iowa State can get Cam Lard in the right frame of mind, watch out. That’s the key though. With Solomon Young out for months, Lard is the catalyst. I’m confident that a healthy Iowa State backcourt can play with anyone in the country.

9 – I had a blast calling Iowa State’s two women’s basketball exhibitions with Brent Blum over the last week. Like the men, Bill Fennelly’s team is super intriguing heading into the season as it is loaded with lineup options. Point guard Alexa Middleton brings a threat to the team that Iowa State wasn’t close to having a year ago. I’m excited to see what her and Bridget Carleton are able to do together in the backcourt when everything is clicking. Sophomores Madison Wise and Kristin Scott both appear to have made strides in the offseason. Should be a fun year.