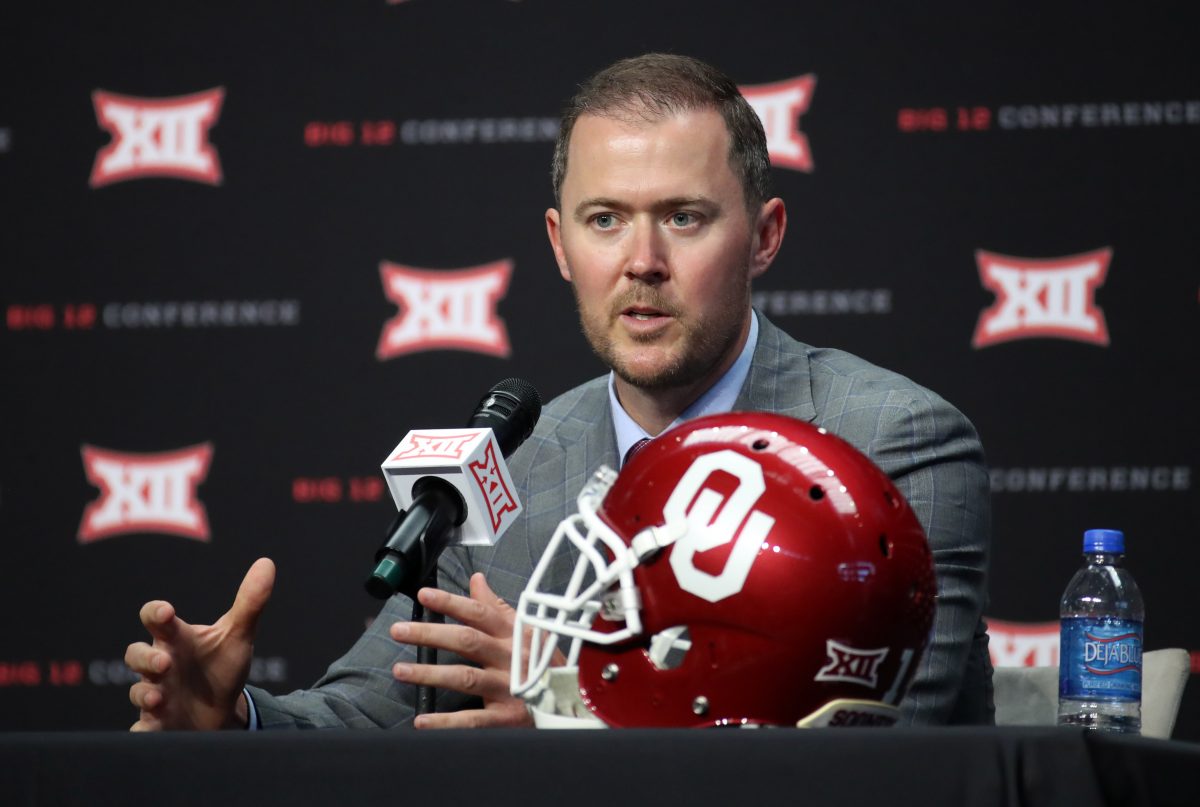 This is my maiden voyage in to Big 12 Media days and as a first time credential holder, it was quite the eye opener. I am not a “real” reporter. I am simply an analyst, so as such, my focus is a bit different and my workload a bit lighter.

I have the license as an analyst and under the benevolent dictatorship of my boss, to listen to press conferences and make giant leaps and conclusions from very generalized information. That is what this article is about – blurbs of interest in the Monday Big 12 coach pressers.

That was either brilliant misdirection and deflection, or a signal to Jeff Long to get busy looking the next guy. Kansas fans are slapping each other on the back with the nervous grin of a guy who audibly farted at a funeral.

While I am sure Kansas is a fine academic institution (Miles touted Kansas’ academic reputation as a primary reason for his enthusiasm), Coach Miles’ assurance that Kansas is more athletic than we think was delivered less than enthusiastically.

The only decipherable on field nugget was that KU will be playing a 3-4 instead of a 4-3 defense. Of course, last season Kansas played a 3-3 stack primarily, but that is a minor detail. It was indicated that they will attack aggressively and rely on an actually talented secondary.

A switch to a 3-4 requires certain types of hybrid/edge athletes to matriculate in to the program before improvement will be seen. I believe Coach Miles is indicating that his plan is to blitz constantly and play man and matchup man behind it. They may be able to catch someone with that type of pressure, hopefully, it won’t be ISU.

PODCAST: Joel Klatt and Bruce Feldman with CW in Dallas

Coach Patterson gave absolutely no indication who would be the starting quarterback in Fort Worth. He is comfortable with six…wink, wink.

What was notable about Coach Patterson was the sizable chip on his shoulder. It is my belief that this chip is a primary motivator for his tenure at TCU and what motivates their outstanding success over the last two decades.

Outside of the quarterback issue, TCU placed two defensive ends in the NFL on the first two days of drafting. However, Coach Patterson touted his depth and a “Will McDonald” type end in Ochaun Mathis who will enter his redshirt freshman season who he expects to pick up the edge rushing slack.

Also of note was a discussion of the recruitment of Iowa native Max Duggan that led to a statement of the growing national presence of TCU that is manifest in its recruiting. Recruitniks are seeing players from neighboring and far away states add TCU to their interest lists, a trend Patterson embraces and views as a legitimizing step on the national scene.

Make no mistake, the TCU goal is not to be relevant in the Big 12, but instead to be a favorite and legitimate playoff contender year in and year out.

All of that was underpinned by a tacit admission that he had lost sight of details last season leading to their erratic play. He emphasized his enthusiasm for the upcoming season and that those details were being made priority in 2019.

I translate that to mean that he likes his options at quarterback. It is my belief that we will see a two quarterback system at OSU this fall, a formula he has deployed successfully in the pre-Mason Rudolph era.

Coach Wells is new to the Big 12 landscape, but having played for Coach Patterson and with a pedigree from a program similar to Texas Tech in the Group of 5. His emphasis today was culture, in particular, a physical culture that we have not heretofore associated with Texas Tech.

Coach Wells acknowledged that culture change takes time, but is quite enthused about how the team has embraced what he imparts.

Schematically, he touted the use of a tight end and physical defense. Power spread is a departure from Tech’s modus operandi, but it is likely that Tech will pose a different dilemma for opposing defenses in 2019. His description led me to believe that it will look a lot like what we have seen from the Campbell era Cyclones on the offensive side of the ball.

Defensively, he called out the exploits of Gary Patterson, Todd Orlando (Texas), and Jon Heacock (our own). While no clues were given as to how they will play on Saturdays, there is a well-placed reliance on Keith Patterson’s (defensive coordinator) ability to craft a less “speed bump” and more “road block” defense in Lubbock.

The Oklahoma portion was punctuated by Boomer Sooner on repeat, which is enough to flatline even the most hardened journalist. Add to that back-to-back appearances in the playoffs and there aren’t many fireworks here.

Coach Riley did express excitement about the new defensive scheme deployed by Alex Grinch and optimism that measurable change will result. Early season challenges from Houston and UCLA will give us a great look at whether that optimism is well placed.

Oklahoma replaces a large portion of its offensive line, but there is plenty of talent to keep them as the favorite. Coach Riley acted as the favorite and had little to add, as is rightful for a blue blood program.

Not much sizzle on the football side of things, but a few interesting nuggets. Oklahoma State and TCU are significant threats to Iowa State’s preseason slot at No. 3 in the league. Both have more questions to answer than Iowa State, but each coach has a clear plan to answering those questions. Matt Wells will need time, but Texas Tech is in good hands. Oklahoma is Oklahoma and the sky is blue.

On Tuesday, the big show rolls in to town with Texas and Iowa State. Looking forward to the mood and atmosphere. More coming…