That’s the message Iowa State women’s basketball coach Bill Fennelly has been sending to his team this week each day at 10:30 a.m. to remind them of the irregular tipoff time they will see on Wednesday.

The No. 20 Cyclone women will take on the Oklahoma Sooners in a road game amidst a competitive race for second place in the Big 12. The tip-off, of course, happening at 10:30.

Over the course of his career, Fennelly has seen his share of early tipoffs, and it’s nothing for the Cyclones to worry about, according to the coaching vet.

“Some teams handle it better than others,” Fennelly said. “Both teams are playing at the same time. We’ve played [in Ames] at noon. That’s just what you have to do in women’s basketball. Do unique things for your fan base.”

The Cyclones host an annual “School-day game” where they tip off at noon and play host to many elementary school field trips.

In their early game this non-conference season, the Cyclones blew out Niagara, winning by 60 points in the first regular season game of the year.

They didn’t have much trouble.

“At the end of the day it’s a very important game no matter when we play it,” Fennelly said. “If we don’t play well, it won’t be because of the game time, it will be because of us or them.”

Coming into the game, the Cyclones have been stringing together a series of good shooting performances as the starting five shifted after remaining the same for the first 17 games of the year.

Since January 19, in Iowa State’s first game against Oklahoma – a 26-point win, Kristin Scott has started for the Cyclones at the no. 5 spot.

“We’re playing really well,” senior point guard Alexa Middleton said. “It’s nice to have Scott come in and spread the floor. She can shoot the three well, you know first in the conference-well.”

It’s not hard to see that the move has paid off for Scott.

At any level of basketball, her 45.1% clip from the three-point line paired with a 60.9% mark overall from the field is ridiculous.

Though, as Scott moves into the starting five, the Cyclones want to see consistent play from their bench.

“I think our starting five is playing at a good level,” Fennelly said. “They’re playing with each other. We do have to be a little more consistent with what happens off the bench. We’ve been lucky in some regards where we haven’t had a lot of foul trouble, but when we have, it’s cost us.”

That play comes in part from Meredith Burkhall – who Scott replaced – and Adriana Camber off the bench.

Both are former starters who were on the court at the start of over 20 games last season but have now moved into a role off of the bench.

“I’ve had many discussions with [Camber] and she is just like [Burkhall],” Fennelly said. “You’re talking about to kids whose roles have completely changed. Your choice is to pout and point fingers or you’re engaged because those are your teammates. It just falls on them to be ready to go when their numbers called.”

The two will try and be ready to help the Cyclones earn another season sweep against a conference foe.

The team just hopes to avoid what happened the last time they went on the road – where they lost to TCU after beating them in Ames by 38.

“You take lessons from each loss,” Middleton said. “[We’ve got to] lock in on that mindset that every game from here on out really matters.”

The Cyclones are battling with Texas and West Virginia to finish in the top three in the Big 12 and avoid a matchup with a seemingly unbeatable Baylor team until the Big 12 championship – if they make it that far.

Both the Longhorns and Mountaineers have four losses in the Big 12, like the Cyclones, with a handful of games to go.

This makes Iowa State’s game at Texas on March 2 a lot more important, but it won’t be that important if the Cyclones drop one that they shouldn’t.

“You can’t think about what happened last game,” freshman Ashley Joens said. “There’s no ‘we beat them by a lot.’ [We] have to play as hard as we did [the first time out].” 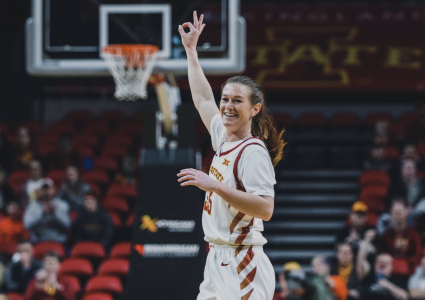