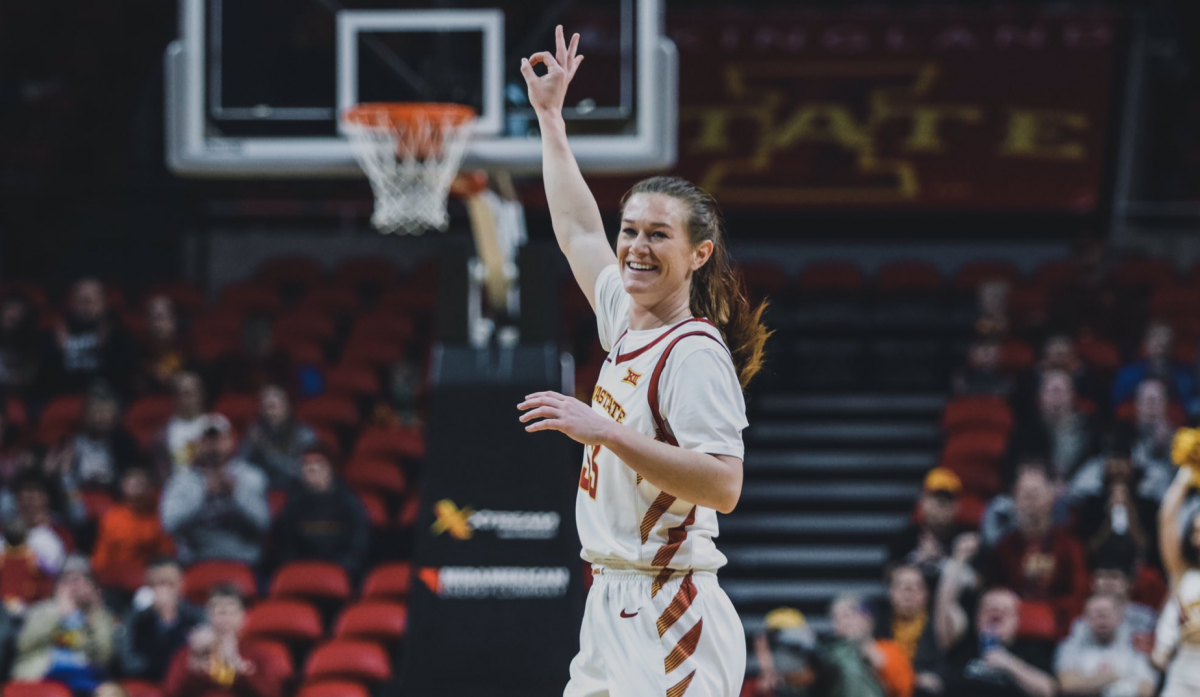 AMES — Slow starts have been a problem for the Iowa State women’s basketball team, which was coming off back-to-back losses.

That was before Saturday’s 104-78 beat-down of Oklahoma.

In the previous two games, Iowa State was held to 15 and 13 first quarter points against Texas and West Virginia.

The Cyclones got out to a 13-0 lead and forced Sooners coach Sherri Coale to call two timeouts in the first 3:50 of the game.

“Iowa State was unbelievable in the first quarter,” Coale said. “They can do that. They can get on a roll like that, and it can be really hard to recover from. They played almost perfectly in the first five minutes of the quarter. We were just trying all kinds of things [like timeouts]. Just trying to stop the wave.”

By the end of the first quarter, Iowa State finished with 39 points (which tied a school record) and held a 28-point lead over the visiting Sooners. They shot a whopping 70 percent from the field, making seven threes.

“For our team to play the way that they did today, was really important,” Fennelly said. “We played the way we are capable of playing.”

Iowa State kept that distance throughout the rest of the game, eventually sailing to a win and its first 100-point performance in three years.

What propelled Iowa State to suddenly have the ability to come out of the gates firing, though?

Over the last week, Fennelly has changed up his team’s practice routine. The Cyclones take to the court, warmup, and boom – they’re scrimmaging.

“We stretched and we went,” Fennelly said. “I don’t know if that necessarily had anything to do with it today, but we had to do something different.”

Saturday also marked the first change to the starting lineup that Fennelly has made this season. Kristin Scott earned the nod for the first time in her career, taking the place of Meredith Burkhall.

Fennelly told Burkhall that Scott had done so well off the bench, and maybe that’s what Burkhall needed.

Scott ended the game with just nine points and two rebounds in 10 minutes of action.

Burkhall, on the other hand, played 22 minutes and finished the game with 14 points and 10 rebounds.

The performance was her first double-double of the season in what was arguably her best game of the year, despite it being the first that she didn’t start.

“That’s kind of how the game goes sometimes,” Fennelly said.

Fennelly attributes it to Burkhall’s character.

“You’re a senior and today is your day to sign autographs after the game and coach says, ‘you’re not starting,’” Fennelly said. “There’s a lot of kids that would have sulked and not been in a really good mood. You would have never had known in practice, before the game, during the game, that she didn’t start the game. That’s a credit to her family, and it was exciting to see her have the night she had.”

The team finished with five players in double digits, including Burkhall and also Ashley Joens, who scored a career-high 25 points with six threes.

“It boosts your confidence,” Joens said. “It gives us momentum to get back on defense and get [another] stop. It really helps.”

Carleton, Wise, and Middleton were the other three in double figures, helping the Cyclones to their 12th home win of the season.

The victory also avoided a three-game losing streak going into the team’s next Big 12 test.

Iowa State will play its next game on Wednesday when it travels to No. 2 Baylor for the toughest road game it will face all year. The game will tip off at 7:00 p.m.