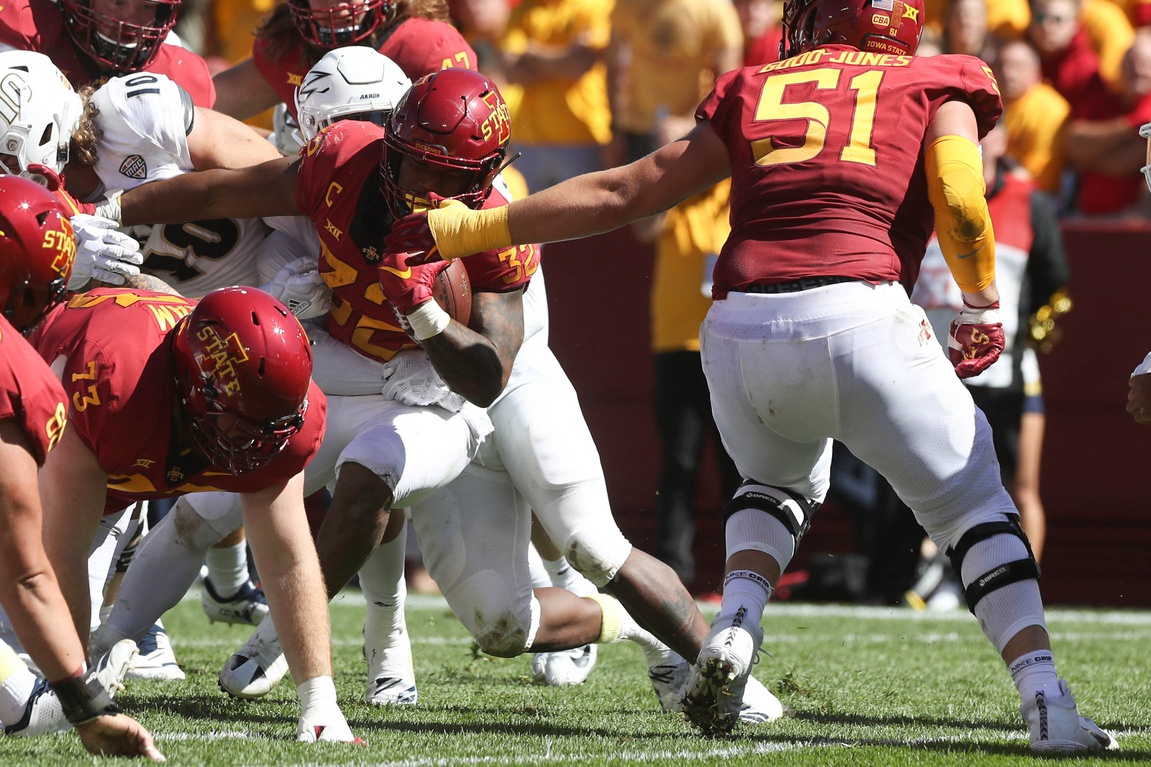 AMES — He’s at a loss — and that’s saying something for David Montgomery.

ISU’s standout tailback recorded his first 100-yard rushing game of the season in Saturday’s workmanlike 26-13 triumph over Akron and looked particularly bruising, shifty and spry while doing it.

“I just took what they gave me,” Montgomery said with a typical postgame shrug.

David Montgomery discusses sitting out the first drive of the second half against Akron and more in this CFTV. pic.twitter.com/a4QZDzx6Kf

One play in particular stood out Saturday.

Down 7-0 in the first quarter, ISU faced third and three from the Akron 29-yard line. The Cyclones called on Montgomery and the Zips saw it coming. A burly defender barged into the backfield and spun Montgomery to the — no, not the ground. Montgomery somehow steadied himself before going down, sprang to his feet and gained five yards.

That play doesn’t happen without Montgomery’s grit, resolve and uncanny athleticism that turned an apparent loss into a solid gain.

“He’s got the craziest balance I’ve ever seen in my life,” Noland said. “He put his hand down and when David keeps his chin up he’s going. He’s ready to go. It’s fun watching him.”

Just don’t expect him to have fun talking about it. Montgomery has often said he doesn’t know how he achieves some of the feats he does. He credits God, the O-line, the weather — anything but himself. He doesn’t waver from this position, which must mean he means what he’s saying.

“Well, he came from my right side but I knew he was coming,” Montgomery said when asked to describe the aforementioned play. “I know at that point I couldn’t make a move. I guess it just happened. I don’t know. It just happened. I’m sorry I can’t tell you much about it.”

Of course, nothing was ever “wrong” with the 5-10, 220-pound junior from Cincinnati who led the nation in forced missed tackles en route to 1,146 rushing yards last season.

The Cyclones then played catchup most of the day the following week against Oklahoma, but Montgomery still rushed for 82 yards on 21 carries.

Finally, Saturday arrived and a better-than-average MAC defense couldn’t handle Montgomery’s mix of moves and moxie — and he’s now considered “back” because he pile-drived, twisted and dashed to a season-best 107 yards on 23 totes, as well as a one-yard touchdown plunge.

“I really thought, versus a talented defensive line, I thought there was really good push today,” ISU coach Matt Campbell said. “I thought we had a really good scheme. You saw the ability to consistently run the football. I thought those things were really positive. Are we where we want to be? No. But the reality is we’re getting great vertical push and we’re starting to get some identity in the running game, which was a first step for us.”

Montgomery is “dinged up,” Campbell said after the game, but it’s minor stuff — and why utilizing a stable of backs behind him is vital to ensuring gains outweigh losses going forward.

“We’ll need all of them,” Campbell said.