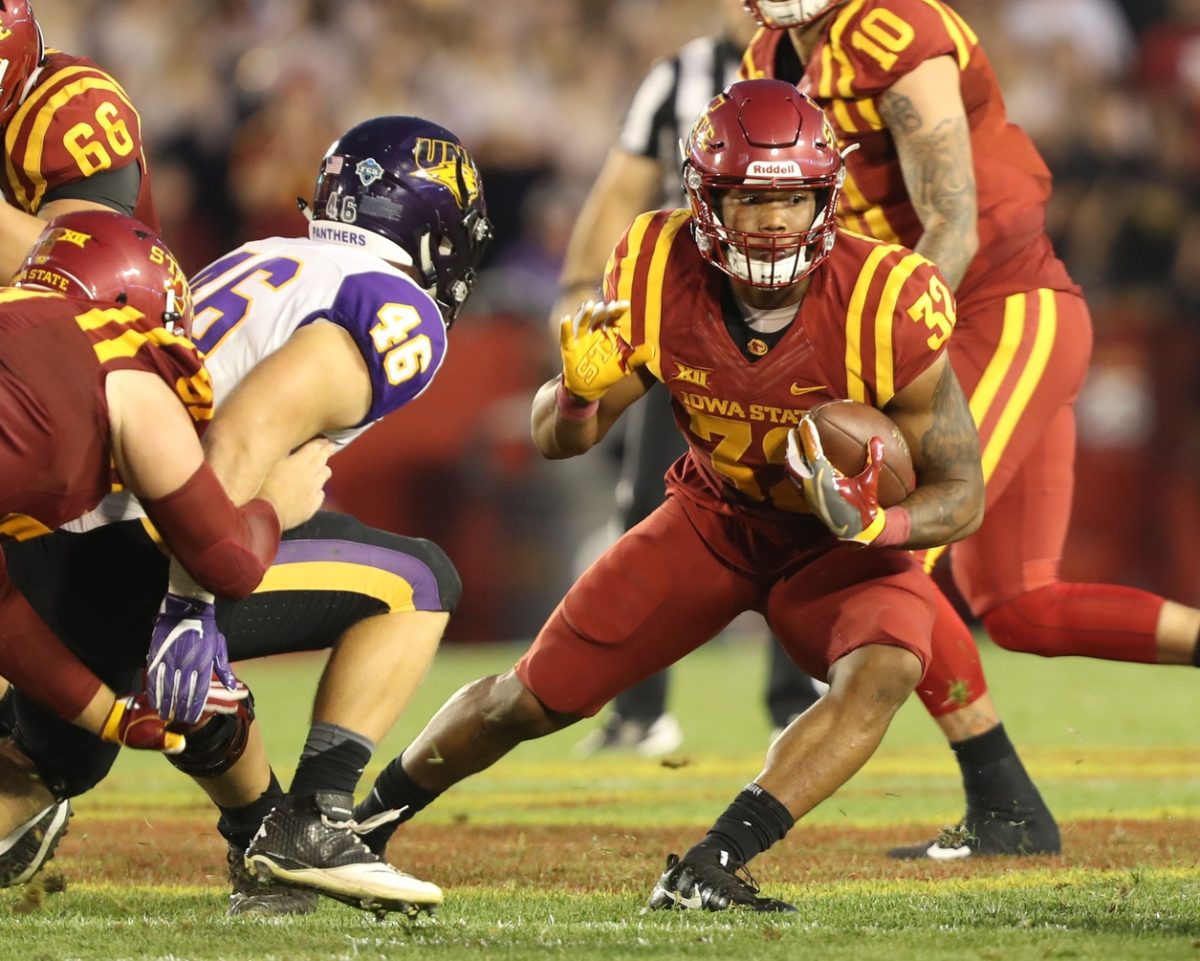 AMES — When Iowa State’s offense took the field with 5:31 left in the first half of Saturday’s season opener against Northern Iowa, the Cyclones (1-0) had been out-gained 273-73 by their FCS foe. The Cyclones held a 14-10 lead, but the vibe in Jack Trice Stadium was starting to feel eerily similar to last year’s 25-20 Panther (0-1) victory.

Then Jacob Park connected with Marchie Murdock for a 13-yard gain. Park hit Trever Ryen on a screen pass, then the shifty receiver jetted 22 yards after a stellar block by Allen Lazard. Two plays for little gain were followed up by an eight-yard Park to Hakeem Butler hook-up that got the Cyclones another first down.

The three plays that followed set the tone for the remainder of the Cyclones’ 42-24 win. David Montgomery took a handoff to the left and bounced off one, two, three, four tacklers before being brought down at the Northern Iowa 19-yard line.

The sophomore, who finished the game with a team-high 83 yards on 14 carries, took another handoff off the left side and churned his legs before being brought down inside the 10. He capped the drive on the next play with an eight-yard diving touchdown run, the first of his two rushing scores.

“Pretty special, right? That guy plays at a different level sometimes,” Iowa State head coach Matt Campbell said. “I thought he was really, he kind of gave us some energy and emotion when we needed it in the football game offensively. I couldn’t say more about David Montgomery from what he stands for, how he runs the ball, how he goes to work day in, day out.”

Here is that TD from David Montgomery! pic.twitter.com/LTIdKTIUDM

From the moment when the Cyclones took the field for that drive until there was 7:20 left in the third quarter, Iowa State out-gained Northern Iowa 208-to-minus-eight. The Cyclones pushed the lead to 35-10 during that span, a run that included Montgomery’s second touchdown run.

It was the stretch that helped Iowa State avoid starting the season 0-1 for the second year in a row. It was a stretch defined by three straight carries by a running back who burst onto the scene as a freshman, but is prepared to show it was no fluke as a sophomore.

“It’s crazy,” Iowa State quarterback turned linebacker Joel Lanning said about Montgomery. “I mean, honestly, us linebackers were sitting there thinking, ‘Who’s going to tackle this guy?’ If you watch him, he’s just like so elusive. The first guy’s there — the chances of him making that first tackle are pretty slim. He’s either going to bounce off of it or shake you or something. As you saw tonight, that’s what he did. He just kept running hard and that’s who David is. He just never gives up.”

David Montgomery on the drive that led to his first touchdown and the ISU defense in this #CFTV. pic.twitter.com/2rW6AzPbu9

One year after Northern Iowa held Iowa State to only 51 yards rushing, the home team ran for 138 yards on 35 carries. Sure, there were times when a veteran Panthers front-seven was able to clog Iowa State’s rushing lanes, but there was clear improvement from where this team was when the two teams last squared off.

Everyone knew Iowa State’s offense had improved at the tail-end of the 2016 season, but the sophomore running back from Cincinnati showed on three carries at the end of the first half that last season’s improvement was no fluke.

“The momentum just shifted,” Montgomery said. “Just gave the team faith and a hope that things can go the right way.”