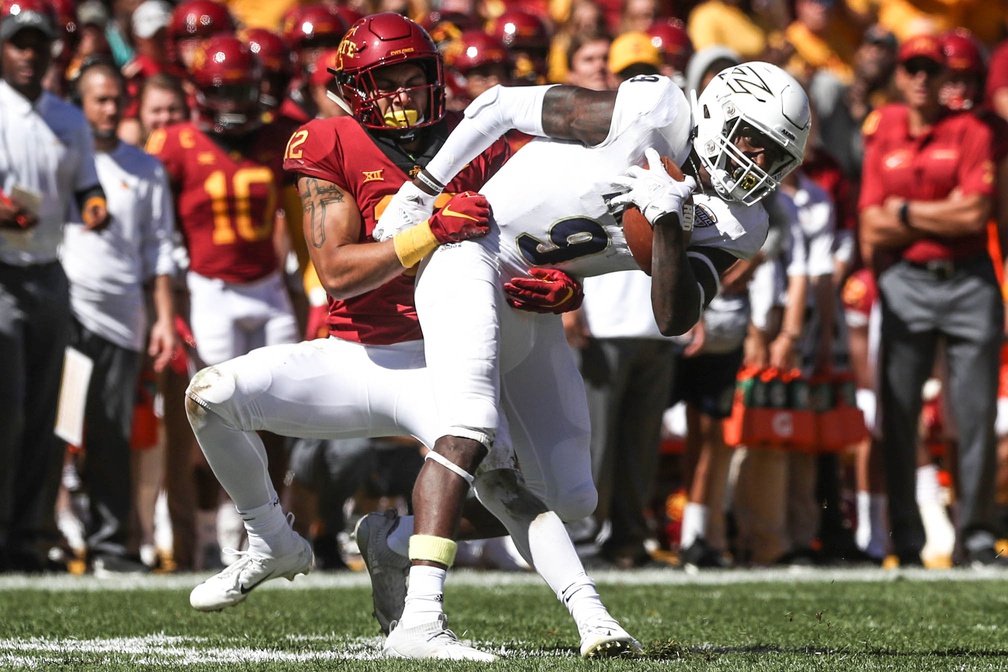 They fixed issues on the fly and gave their team every chance to win.

Yes, Iowa State’s defense fully did its job again Saturday as the Cyclones notched their first win of the season, 26-13, over a plucky Akron team.

It’s the one thing you can almost always count on — unlike ISU’s promising but erratic offense, which so often finds itself mired in one step forward, two steps back mode.

The Cyclones (1-2) scrounged up 26 points and 365 total against a Zips team (2-1) that surrendered 34 points and 405 passing yards alone in last week’s pick-six party at Northwestern.

Those were few and far between for ISU, which clearly made it a top priority to establish the run game and eschew taking risks downfield.

“Northwestern (Akron) had three defensive turnovers and we knew they were good in the back end in keeping that — they’re ready for a tipped ball,” said quarterback Zeb Noland, who completed 26-of-34 passes for 233 yards and a touchdown while improving to 2-1 as a starter. “They’re ready if you make a little mistake and miss a guy. So just playing within ourselves and taking what they give us.”

So they did — and it was enough.

But against TCU, Oklahoma State and West Virginia?

That’s to be determined. And more than a little bit sobering.

“We’re not naive,” Campbell said. “The reality of it is those are areas on both sides of the football and even in special teams where big plays happen, good things happen and then we shoot ourselves in the foot a little bit. That is — you can’t do that here at Iowa State. You can’t win games. We won today because we stayed the course and ran the football and stopped the run. Those things are really what allowed us to mitigate some of those mistakes. But at the end of it, if you’re talking about where we want to go and what we have the potential to do, obviously those things aren’t what we can do to win football games at the caliber that we’re about to play in.”

What the Cyclones can consistently do is rely on their defense.

After Akron’s shifty quarterback Kato Nelson converted five of the first nine third downs, he went 0-for-5 after that, including 0-for-3 in the fourth quarter.

ISU surged into the backfield for four sacks, including 1.5 for JaQuan Bailey, who now is tied for ninth all-time at 12 with Brandon Brown.

JaQuan Bailey talks about Iowa State’s pass rush against Akron and more in this CFTV. pic.twitter.com/CUeMkp16wp

The reason for the major disruptions? Segments of the defense working together, individually and as one.

“It was really thanks to our secondary,” said Bailey, who also forced a fumble. “Because we had some great great coverage.”

Akron didn’t surpass 200 yards in total offense until nine minutes remained in the game — and the Zips’ lone touchdown came in the first quarter after a Tarique Milton fumble set them up at the ISU 26.

“Adjustments, I think, become critical,” Campbell said. “And I think even offensively, defensively, trying to play in rhythm. I thought there was finally some rhythm through the second quarter, third quarter of the football game where we created the rhythm and the recipe of what’s it gonna take to win the game and how do you want to go win this football game. I thought that defensively our ability to get off the field a little bit better in the second half was critical. Some of those points in the first half, come off third down situations, second and long situations, which are still defensively a recipe for our success. And then offensively, having the ability to consistently win on first down. I think those two things are things you want to go back to and say how do we keep getting better, because those are things the last two weeks that maybe we need to continue to correct.”

The defense continues to hone in on and execute in this key area.

It’s why ISU played in a game decided by more than 10 points (barely) for the first time in its last eight outings.

It’s also why as the offense plays catch-up in terms of consistency, hopes for a win are rarely out of reach.

“Like I was saying earlier, a lot of it — it’s all mental,” said Eisworth, who had a team high-tying nine tackles and three of the Cyclones’ seven pass breakups. “If you know what you’re doing, if you know the job, and the guy’s job next to you, and the mental aspect is good, then the athletic aspect will take over and you’ll be able to make plays.”

That’s where ISU’s offense is trying to get, in fits and starts.

Butler’s still shining when called upon. He cartwheeled into the end zone for a touchdown and also caught a key fourth-down pass. Montgomery — though slightly dinged up late in the first half — bounced off and pummeled defenders as usual, too, rolling up 107 yards and a touchdown.

So playmakers are showing up. The plays must meet them halfway.

“I know I said this before the season and I still feel really confident about it — when your best players are your hardest workers and they’re the guys that are all working, everybody else, sooner or later, everybody is going to try to catch up to those guys,” Campbell said. “That’s where Eisworth is at, that’s where Hakeem Butler is at, that’s where Montgomery and all those guys really are. They’re doing that because of their work ethic. I’m really proud of those guys. Some of those guys are playing at a really high rate for us.”