When the NCAA announced changes to kickoff rules back in April, it seemed like a minor detail. The alteration essentially treats kicks fair caught inside the 25-yard line as touchbacks, allowing the offense to set up at the 25.

On the surface, it does not seem like a major change, but Iowa State special teams coordinator Joe Houston disagrees. This is a rule change that will force coaching staffs around the country to alter their strategies on kickoffs and kickoff returns.

Until someone sees the new rule in live game action, it will be hard to even know the best way to attack it.

“I think it’s going to be one of the ultimate copycat deals,” Houston said. “The guy who comes up with the best idea is going to put it on tape week one or week two then you’re going to see a lot of teams copycat that guy. I think in terms of both kickoff and kickoff return, you have to look at it differently. Without getting too much into schematics, you’ve got to be sharp and especially in terms of being on return and communication. You’re going to see a lot more squibs and pooches and sky kicks where guys that normally wouldn’t field the ball, you’re going to try to kick them the ball so that you’re not giving the returner the football. You’re going to try to secure those touchbacks and fair catches.”

“I think it will impact the game more than we think.”

Houston’s thoughts on the new rule show this will be another opportunity for strategizing and not merely a way to limit the injuries created on one of football most consistently dangerous plays. How can a team exploit the new rules while kicking off?  How can they be used in someone’s favor while returning?

The second question will be especially pertinent to Iowa State in 2018. Kene Nwangwu will be back on the field as the Cyclones’ kick returner after missing all of last season due to an Achilles tendon injury — and it is a welcome return for one of the team’s most dynamic weapons.

As a true freshman in 2016, Nwangwu earned All-Big 12 honors from multiple publications and was a Pro Football Focus first-team freshman All-American after averaging 26.4 yards per kick return to rank second in the Big 12 and No. 15 in the nation.

“Kene, he’s very gifted,” Houston said. “We all know how fast he can be. Having him, you know, obviously, we lost him last year to injury. Having him back this year is going to be a tremendous help for our football team. What he does back there is really dynamic. He’s explosive and we all know that just because of his proven record of being a top guy in the Big 12 in 2016. We’re going to find ways to have him back there and really build more of a speed package back there with guys more athletic and guys who can field balls rather than a bigger, heavier set guy.”

Houston said Tuesday there are six players who are currently in a position to compete for the job as Iowa State’s top punt returner in 2018. Well, he actually only listed five of the names, but I’ll preface by saying Johnnie Lang is believed to be the unnamed sixth member of the list.

“There is six guys in the loop,” Houston said. “You’re looking at D’Andre Payne, Brian Peavy, Lawrence White, Tarique Milton, Deshaunte Jones, those guys can all pretty much do a really good job back there.” 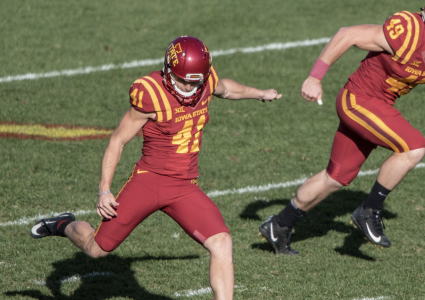 PRACTICE REPORT: Who will be Iowa State’s kicker in 2018? 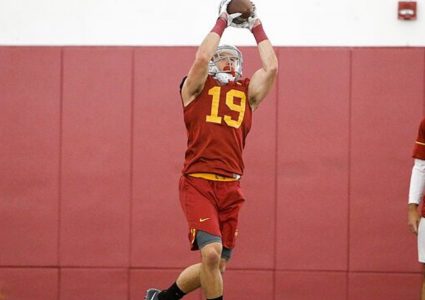