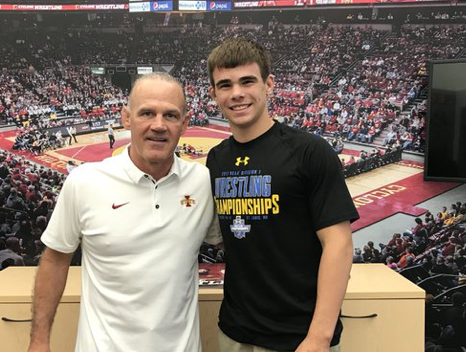 Ballard’s 160-pounder, Tate Battani has announced his commitment to Iowa State per his Twitter after originally committing to the University of Wisconsin-La Crosse.

After further consideration I am proud to announce that I will continue my academic and athletic career at Iowa State University! Go Cyclones🌪 pic.twitter.com/nB5JzFxW9p

Battani is a four-time state qualifier and placed third at 160-pounds at the state wrestling tournament. Battani ended his high school career with a 48-8 overall record.

Battani has placed while competing at the Iowa Junior freestyle state tournament and in the Greco-Roman at 170 pounds. During his senior year, he was also named to the Raccoon River All-Conference team.

Battani looks to be an addition for depth at the 165 or 174 weight classes and becomes a member of the impressive 2018 in-state recruiting class which includes Joel Shapiro, Isaac Judge and Grant Stotts among others.