One of Iowa State basketball’s most influential decisions in recent memory is expected to come down on Wednesday. Will All-Big 12 guard Lindell Wigginton return to Ames for his sophomore season or hire an agent and keep his name in the 2018 NBA Draft?

It is a decision with the potential to essentially derail Iowa State’s hopes of major improvement in 2018-19 before Cap City League even begins. It also has the potential to firmly place the Cyclones in the conversation as the Big 12’s most improved team entering next season.

Here’s a look from each side of Wigginton’s impending decision and what it could mean for the future of Iowa State basketball.

If he stays in college…

Iowa State will return five of its top six scorers from last season, including a pair of All-Big 12 honorable mention honorees in Wigginton and sophomore center Cameron Lard. Those five returners will pair with six new additions to give Iowa State what should be a much more talented roster on paper in 2018-19.

Wigginton and Virginia transfer Marial Shayok both have the ability to be matchup nightmares in the backcourt, as does incoming freshman Talen Horton-Tucker, the second-most heralded recruit of the Steve Prohm era – behind only Wigginton.

Those three players would be expected to headline the backcourt with Nick Weiler-Babb, Zoran Talley and Terrence Lewis all slated for crucial roles. Incoming freshman Tyrese Haliburton could also add length, playmaking and 3-point range in a best-case scenario.

Lard would lead the frontcourt alongside junior Solomon Young and Nebraska transfer Michael Jacobson with incoming freshmen Zion Griffin and George Conditt both capable of having impacts in their first year on campus.

Led by Wigginton, this is a roster with significantly more talent than last year’s group that finished last in the Big 12. If I had to guess, I would say the league’s coaches would predict them somewhere in the range of 5-8 in the preseason rankings, but the potential for a higher finish will be there.

With that said, expectations would be high with, at minimum, a return to the NCAA Tournament on the minds of Iowa State fans. A few would probably even start thinking of the potential to topple Kansas’ reign atop the league and a deep, deep run in March.

If he stays in the draft…

All of a sudden, Iowa State goes from being a scary team on the rise to likely being predicted as the league’s bottom dwellers entering the season.

Shayok and Horton-Tucker would be asked to shoulder a huge load in the backcourt while Weiler-Babb would be forced back into being the team’s primary point guard unless Haliburton is a lot better than what we think he is entering his freshman season and can take on some of the ball-handling to relieve pressure off of Weiler-Babb.

Wigginton leaving would likely push Lard further into the forefront as a major offensive threat alongside Shayok, Weiler-Babb and Horton-Tucker. There are levels of concern that come with this fact as we saw Lard is capable of shouldering a major load offensively during stretches of the season, but we also saw his consistency wane down the stretch towards postseason play.

All in all, Wigginton not returning for his sophomore season presents Iowa State with more questions than answers. Suddenly, the Cyclones would be without their biggest workhorse from last season and few potential options exist for finding outside help.

The team’s success would hinge greatly on the improvement on players already in the program, transfers and freshmen who have never played a minute of college basketball. Could they shock the world and still go onto having an incredibly successful season similar to what they would have had with Wigginton?

But, if Wigginton does not return, it would be awfully hard to predict anything but the Cyclones finishing near the bottom of the Big 12 again in 2018-19. 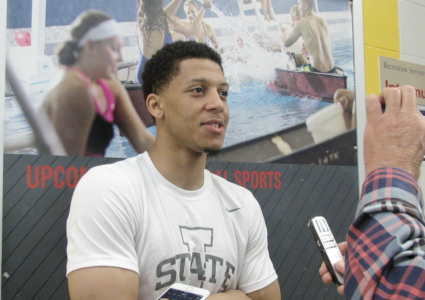