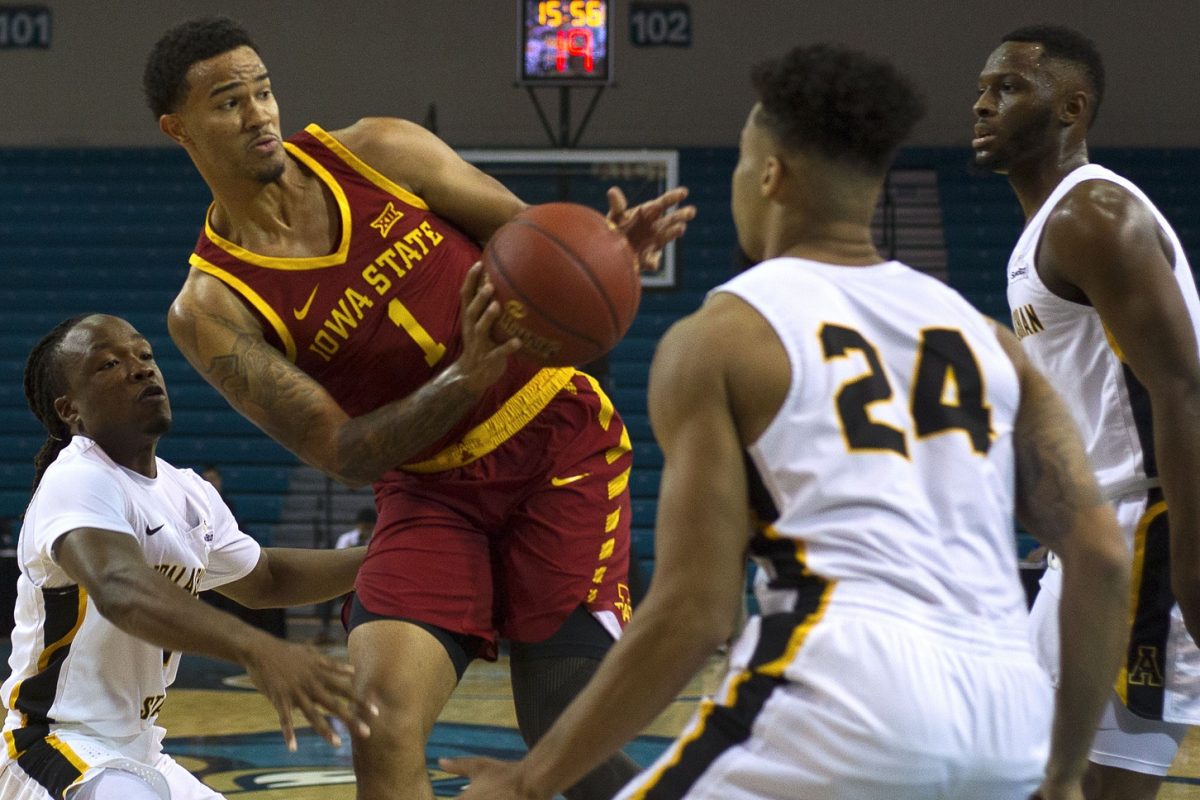 AMES — Sure, Nick Weiler-Babb’s stats have popped off the page as of late.

And, yes, Iowa State’s looked like a different — and vastly improved — team since he assumed the primary point guard duties five games ago.

But, no, he’s not even considering putting himself in all-time program great and former teammate Monté Morris’s league just yet.

The sample size is far too small — and even he knows there’s only one Monté.

“I texted him this morning and told him to ignore whatever’s going on Twitter — everything that’s being said about him,” Weiler-Babb said. To even be in the conversation with Monté about being an assist guy like that is something you don’t even think about.”

Those Tweets from some fans were never meant to truly compare the overall resumes of the two skilled Cyclone guards, of course.

ISU fans are simply encouraged by Weiler-Babb’s and the entire team’s efficient and fast-paced production since he became “the guy” at the point of attack — a spot he’ll man again in Thursday’s 7 p.m. Cy-Hawk Series matchup (ESPN2) against Iowa at Hilton Coliseum.

“He’s been great,” Cyclones coach Steve Prohm said of Weiler-Babb, who’s dished out 10 or more assists three games in a row. “You watch the (94-80 win over Northern Illinois) last night, he did a terrific job. I don’t know, 10 assists, 11 assists again. he really does a good job finding people and making the extra pass. He’ll give up two for him to get another guy an easy basket and you saw that. He did that last night, saw Cam (Lard), he gave it up to Cam. But he saved us a couple times on the defensive end because his basketball IQ’s really good. He’s been really good since we made that change and just said, ‘Hey, you’re the point.’ I think he’s embraced it. I think he feels more comfortable.”

The Cyclones (5-2) will need to handle some potential height-based discomfort from the deep, but erratic Hawkeyes (4-5), who have lost three straight games after a 4-1 start.

Iowa features 11 players averaging at least 14.1 minuter per game and seven of those players stand 6-7 or taller.

“I don’t look at people’s records,” said Prohm, whose team has won five straight games. “I look at the talent level and what can (Iowa’s Jordan) Bohannon do, what can (Isaiah) Moss do? (Luka) Garza. They’ve been bouncing around at the 3 position with some different guys, but kind of like if you listen to the telecast last night, what the announcers were saying, and Steve Bardo, who’s been around that league for a long time, is, ‘Once they get it figured out, they’re going to become a good basketball team.’ Hopefully it’s not Thursday.”

The Hawkeyes, like the Cyclones, want to play fast. ISU’s done it better since its early struggles largely because Weiler-Babb’s doled out 47 assists to eight turnovers in the last five wins.

“He’s great,” freshman ISU guard Lindell Wigginton said. “He’s very unselfish. I think that’s why coach put him at that position and he’s playing the position well. I like it. He likes it. We’re all comfortable with it.”

“It was just kind of second nature,” Weiler-Babb said.

Wigginton’s drained 14 of his 26 attempts (53.8 percent) from 3-point range since being given more freedom off the ball. He was 4-for-15 from distance before that.

Same goes for Donovan Jackson, who’s scored 24 or more points in all but one game since Weiler-Babb became the main catalyst. Jackson scored a combined 10 points in two games before the switch.

“Everybody just bought into coach’s plan,” Weiler-Babb said. “What coach has been telling us since day one and we kind of had those two losses and we needed those to kind of give us a reality check and to see where we really need to be at.”

That’s obviously at the point for him. Oh, and he’s averaged eight rebounds a game since taking over that spot, too, which obviously helps spark the transition game the Cyclones need to tap for production as often as possible.

“Coach is always big on defense and me being the point guard, I’m at the top of the key and then get an outlet, a great outlet,” Weiler-Babb said. “Stops is a big thing and just leads to transition. That’s fueled our offense so far this year and it’s going to be a big key factor in us winning big games down the road.”

Games like Thursday’s. In Prohm’s first season, ISU came back from 20 points down to win at Hilton.

Last season, Iowa led all but four minutes en route to a 78-64 upset of the Cyclones in Iowa City.

So what kind of atmosphere can players such as Weiler-Babb, Jackson and Solomon Young (the only current ISU players to compete in a Cy-Hawk game) help prepare the Cyclones’ numerous new guys prepare for?

Wigginton, for one, won’t need any help from his point guard on this front.

I heard from a lot of people that it’s gonna be crazy,” he said. “I’ve never played in anything like that before, so I’m just looking to go in and have fun.”