Campbell’s 2017 Cyclones, picked to finish ninth in the Big 12 preseason coaches poll, wrapped up an outstanding regular season by tying for fourth in the Big 12 standings with a 7-5 overall mark and a 5-4 league slate.

Iowa State, which earned a bid to the Liberty Bowl on Sunday, its first bowl berth since 2012, rose into the AP Top-25 for the first time since 2005 and made its first-ever appearance in the College Football rankings under Campbell’s leadership.

The Cyclones garnered national attention in early October when they knocked off then-No. 3-ranked Oklahoma, 38-31 in Norman. The win was the school’s first against a top-5 team on the road and first against the Sooners since 1990.

Three weeks later, ISU defeated another top-5 opponent in TCU (14-7) to cap off a perfect October at 4-0. The win doubled ISU’s career win total vs. top-5 opponents (ISU was 1-56-2 heading into the season).

ISU is one of three teams in the nation (Auburn, Ohio State) with two wins over top-5 opponents.

The Cyclones also tied the school record for conference wins in a season (five) and won four road games, tying for fourth in school history.

Campbell’s Cyclones were successful because of balance and details. The offense averaged 29.9 points per game and tied a school mark for 40-point games in a season (five).

The defense was one of the best in the Big 12, holding eight of nine league opponents to at least 10 points below their season average, ranking second in the league (conference games only) in scoring defense (18.9) and total defense (357.2).

Iowa State is 10th nationally in turnover margin (+11) and is the only team in the nation without a lost fumble.

Campbell, who has a 45-29 record in six seasons as a head coach, is also a finalist for the George Munger Award, given annually to the nation’s best football coach by the Maxwell Club. 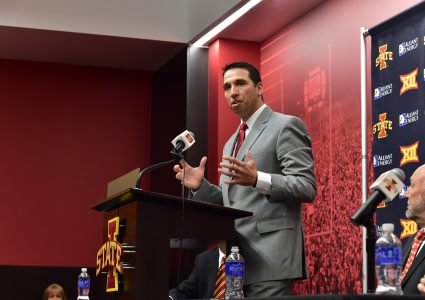