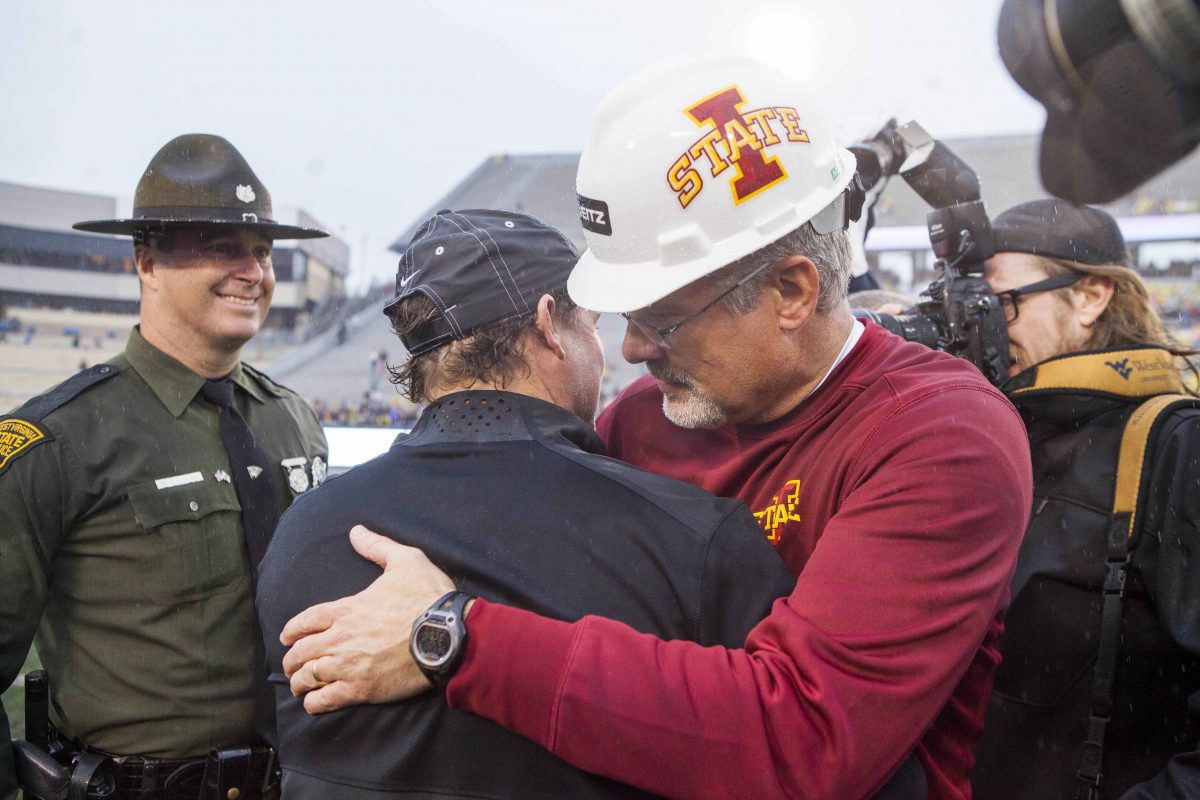 MORGANTOWN, W.V. — As the final seconds of the Paul Rhoads era at Iowa State ticked off the clock on Saturday, Rhoads donned a hard hat and ran to meet West Virginia head coach Dana Holgorsen.

The Mountaineers had just wrapped up a 30-6 win over the Cyclones, capping Rhoads’ seven-year tenure as head coach, in which he compiled an overall record of 32-55. Saturday could be considered a microcosm of Rhoads’ time as coach.

It was a hard-nosed game in which the offense couldn’t get much going and the defense was better than the final score showed.

“When they get done with their football days, some of them it’s today and for others it will be a year, or four years. They’ll be prepared to face life’s obstacles. I’m proud of that accomplishment,” Rhoads told the Cyclone Radio Network after the game. “As a football team, you and I both know that there’s a lot of young talent in this locker room and on the roster. They’ve developed a certain skill set with what it is they do and as much as anything a mindset that they’re ready to turn the corner.

The offense, especially the offensive line, struggled to just 284 yards of total offense.

The defense was solid for a portion of the game before West Virginia’s offense came alive in the second half. The Mountaineers finished with 415 yards of total offense, 202 passing and 213 on the ground.

“We put our defense in a very bad position that first half,” Rhoads said. “They just kept responding. Really pleased from start to finish with how they played.”

Rhoads went back to his gambling ways by attempt three fake punts on the afternoon, two of which were successful and set up the Cyclones’ second field goal.

West Virginia first struck on a 60-yard pass from Skyler Howard to Shelton Gibson that put the Mountaineers on top 7-0 with just over 10 minutes left in the first quarter.

Iowa State got on the board on the first play of the second quarter when Cole Netten knocked through a 33-yard field goal, which would be answered by a pair of field goals by Josh Lambert for WVU.

Netten would put through a 49-yard field goal as time expired on the first half to make the score 13-6.

West Virginia dominated the second half of the game scoring on a 34-yard field goal from Lambert, a 32-yard run by Howard and a nine-yard run by Rushel Shell to put the final score at 30-6, officially marking the end of the Rhoads era.

“I’m going to miss the Cyclone Nation and everything about being the leader of this program,” Rhoads said. “We got fired on a year that we set the attendance record at Iowa State. The stadium expansion, the record crowds that our football team and how they play have put in Jack Trice. The erection of the Bergstrom Complex and how that’s elevated Iowa State football. But you’re here in Morgantown today and this team is 7-4 and in the postseason and that upper deck was a ghost town. Jack Trice Stadium wouldn’t be that way. I’ve got to believe in small part that it’s because they liked the way our kids played football.”

Sophomore quarterback Joel Lanning struggled on the day for the Cyclones finishing 17-34 for 163 yards with two interceptions while facing heavy pressure on most of his drop back opportunities.

Freshman running back Mike Warren capped his stellar debut campaign with 74 yards on 19 carries before exiting the game with a back injury in the second half. Warren’s 1,313 yards on the season is good for fifth all-time in a single-season at Iowa State.

It was the usual characters leading the way for the Iowa State receiving corps with sophomore Allen Lazard catching five passes for 74 yards and senior Quenton Bundrage making seven catches for 70 yards.

Saturday’s game was Lazard’s twenty-third game in a row with a catch which ties the school record as he enters his junior season.

The Cyclones finish the season 3-9 and 2-7 in the Big 12 in Paul Rhoads’ final season, but they will potentially return a great deal of talent for any coach that takes over next year.

“We’ve already started talking about what we need to do this offseason,” Lazard said. “We are going to come into 2016 with a bang.”