MORGANTOWN, West Virginia – Iowa State put together a fourth-quarter rally to temporarily move ahead of No. 24 West Virginia, but the Cyclones offense ran dry as the Mountaineers earned a 57-47 win Wednesday night at the WVU Coliseum. The win makes West Virginia 19-6 on the season, and 8-4 in Big 12 play. Iowa State is now 12-11 on the year and 4-8 in the Big 12.

Both squads started the game lethargically from the field, with the two sides combining to go 1-of-17 from the field and only post a score of 4-2 in favor of the home side halfway through the first quarter. It was the Cyclones who were the first team to really recover from the cold-streak, building a 9-0 run via five points by Jadda Buckley and four from Seanna Johnson to get ahead 11-6. The Mountaineers were able to bring it back to a one-point game at 11-10, but Buckley finished the quarter with a 3-ball to give ISU a 14-10 advantage.

Once again, the Cyclones were absent from the scoreboard to start the second quarter, as it took 4:49 of game action before ISU got on the board. WVU took advantage, going through Bria Holmes to run off six-straight points and get back ahead at 16-14. The Cyclones’ second quarter struggles were compounded on the glass, where West Virginia held a 14-to-5 edge for the quarter as they built up a lead of as many as five points.

Down 26-21 to start the second half, Iowa State got a burst of production from Johnson, who recorded ISU’s first five points of the third quarter to cut the Mountaineer lead to two at 28-26. Once again, the Cyclones struggled to stop Holmes, who carried the home side to an eight-point advantage at 34-26. Kidd Blaskowsky ended a string of 10-straight missed shots by the Cyclones with a 3-pointer to help reel the Mountaineers back in.

Down six to begin the final period, Iowa State looked to Johnson again for a spark and she delivered the first four points of the frame to cut the Mountaineer lead to two at 39-37. Meredith Burkhall’s jumper tied things up at 39-39 with 7:25 to go. Johnson put ISU back ahead at the line with a pair of free throws, but the lead was short lived as Arielle Roberson got WVU back ahead with a 3-pointer, which started a 6-0 run to make it 45-41.

ISU fought back to tie the game at 45-45, but the Mountaineers got separation again, this time from Lanay Montgomery, who scored five in a row to restore the WVU lead to 50-45. The Cyclone offense was able to match the Mountaineer output, but were not able to get any closer than three points as West Virginia closed out the 57-47 win.

*Iowa State has now hit a 3-pointer in an NCAA-record 666 games.

*With her one assist, Seanna Johnson became the fourth player in Iowa State history to post 1,000 points, 700 rebounds and 200 assists in a career. She joins Megan Taylor, Jayme Olson and Tracy Gahan.

*Johnson finished with 19 points, her fourth-straight game in double figures and 57th of her career.

Iowa State is back on the road this weekend when the Cyclones head to Fort Worth to take on TCU on Saturday. Tip-off at Schollmaier Arena will be at 1 p.m. with the game being televised on Fox Sports Southwest. 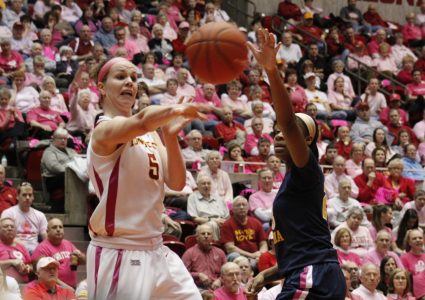 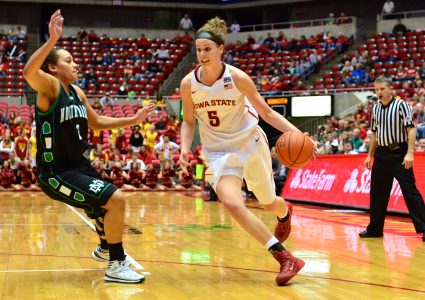