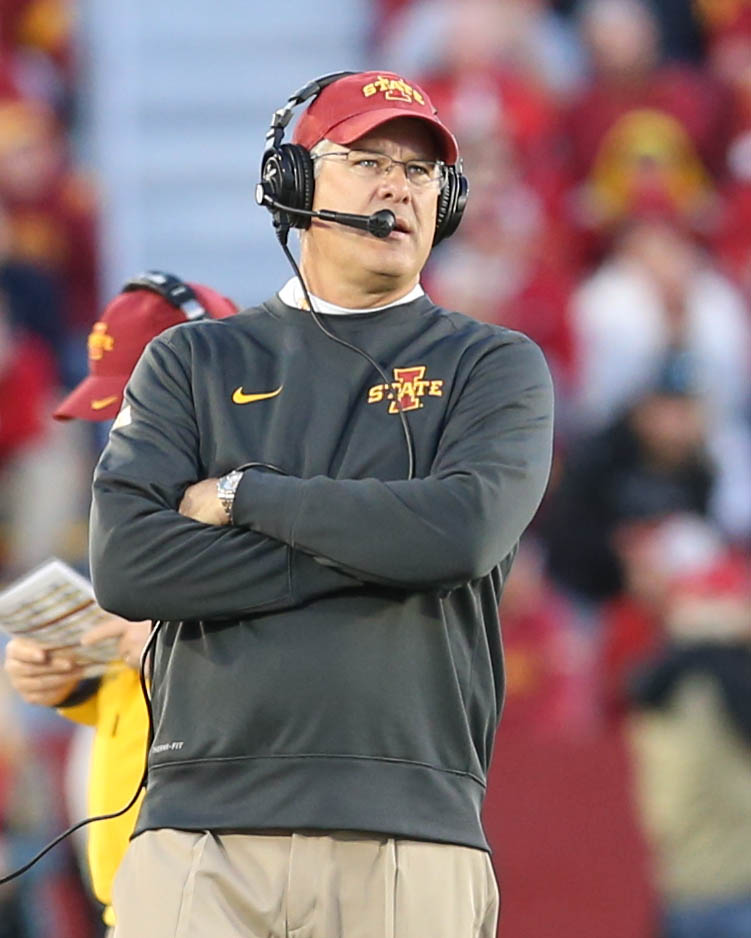 AMES — There were, as always, positives and negatives for the Iowa State football team in their 45-21 loss to TCU Saturday night.

The Cyclones hung right with the No. 3 team in the nation for the first half while taking chances and not being scared to take a risk. The second half was a different story as the Horned Frogs’ high powered offense got rolling and the Cyclones slowed.

Here are my five takeaways from the loss.

1. Paul Rhoads takes chances, and then he doesn’t

During the first half, Paul Rhoads looked like the coach that earned himself the nickname “Riverboat Rhoads.”

He and his staff dialed up a perfectly executed fake punt that ended in a 21 yard pass from Holden Kramer to Mitchell Harger on fourth and two in the first quarter, setting up Iowa State’s first touchdown.

Later in the first half, Rhoads kept his offense on the field on fourth and one allowing Sam Richardson to run the quarterback sneak and pick up the first down.

It was refreshing to see Rhoads show some edge and not just play conservatively. It seemed clear that he knew what it would take to beat TCU Saturday night, and that was keeping the Frogs’ offense off the field.

That trend didn’t seem to carry over to the second half.

While the Cyclones trailed by 10 with just over three minutes left in the third quarter, Rhoads elected to punt instead of going for it on fourth and three from the TCU 48-yard line.

TCU would eventually go down the field to score on the first play of the fourth quarter, putting them up 17, and effectively killing any hopes the Cyclones had of an upset.

How different could the game have been if Rhoads had gone for it on fourth and three instead of just giving it back to one of the best offenses in the country? We’ll never know, but it would’ve been nice to see them keep on the aggressive path they set down in the first half.

2. TCU can literally score from anywhere in any amount of time

This might sound like hyperbole, which it may be, but it isn’t too far off from being the truth. The Frogs are capable of chewing up huge chunks of yards in a hurry.

Out of TCU’s six touchdown drives, three of them were shorter than two minutes. That includes their second score which came on an eight play, 82-yard drive that took 1:47.

That’s a lot of yards in not very much time.

Only one of the team’s drives lasted longer than four minutes, an 11 play, 61-yard drive that took 5:12 and ended in a field goal.

TCU had the football 11 times Saturday night. They scored seven times and turned it over once with only one drive lasting longer than four minutes.

Iowa State threw the ball deep down the field more Saturday night than they have during any other game this season, and it paid dividends, especially in the first half.

The Cyclones hit on five pass plays of more than 20 yards during the first half, including the 74-yard touchdown pass from Joel Lanning to Allen Lazard.

It was clear that the coaching staff saw they had a mismatch that benefited Lazard as he made three of the catches for 20-plus, and they targeted him downfield a lot more than that.

Kudos to TCU for making adjustments and holding the Cyclones to one play of 20-plus in the second half through the air, but ISU did draw some penalties downfield in trying to challenge the TCU secondary.

Even though the Cyclones didn’t hit gold on every throw downfield, it was very encouraging to see Lazard, Quenton Bundrage and co. showing the much hyped big play abilities.

What more can be said about TCU’s senior quarterback? If it wasn’t for a guy named Fournette down in Baton Rouge, I find it hard to believe that Boykin wouldn’t be the front-runner for the Heisman Trophy.

He keeps plays alive as well as, or better, than any other signal-caller in the country. Add pinpoint accuracy on his downfield throws and you have the most electric quarterback in college football.

A shout out does have to be made the TCU wide receivers, especially Josh Doctson, who broke TCU’s single-season record for receiving yards Saturday night.

It’s the seventh game of the season.

Boykin and co. are for real.

The Cyclones have found success recently with Joel Lanning on the field and Saturday was no different.

The sophomore from Ankeny ran for just one yard on his first play on the field, then hit Lazard for the long touchdown pass one play later.

He didn’t get another snap. Why?

Lanning and Rhoads didn’t seem to have the answer for that after the game with Rhoads going as far as to say, “That will be a part of our Sunday analysis.”

Offensive coordinator Mark Mangino was heaping so much praise on Lanning this week that reporters had to ask if it was possible he’d split snaps with Richardson moving forward.

We got our answer.