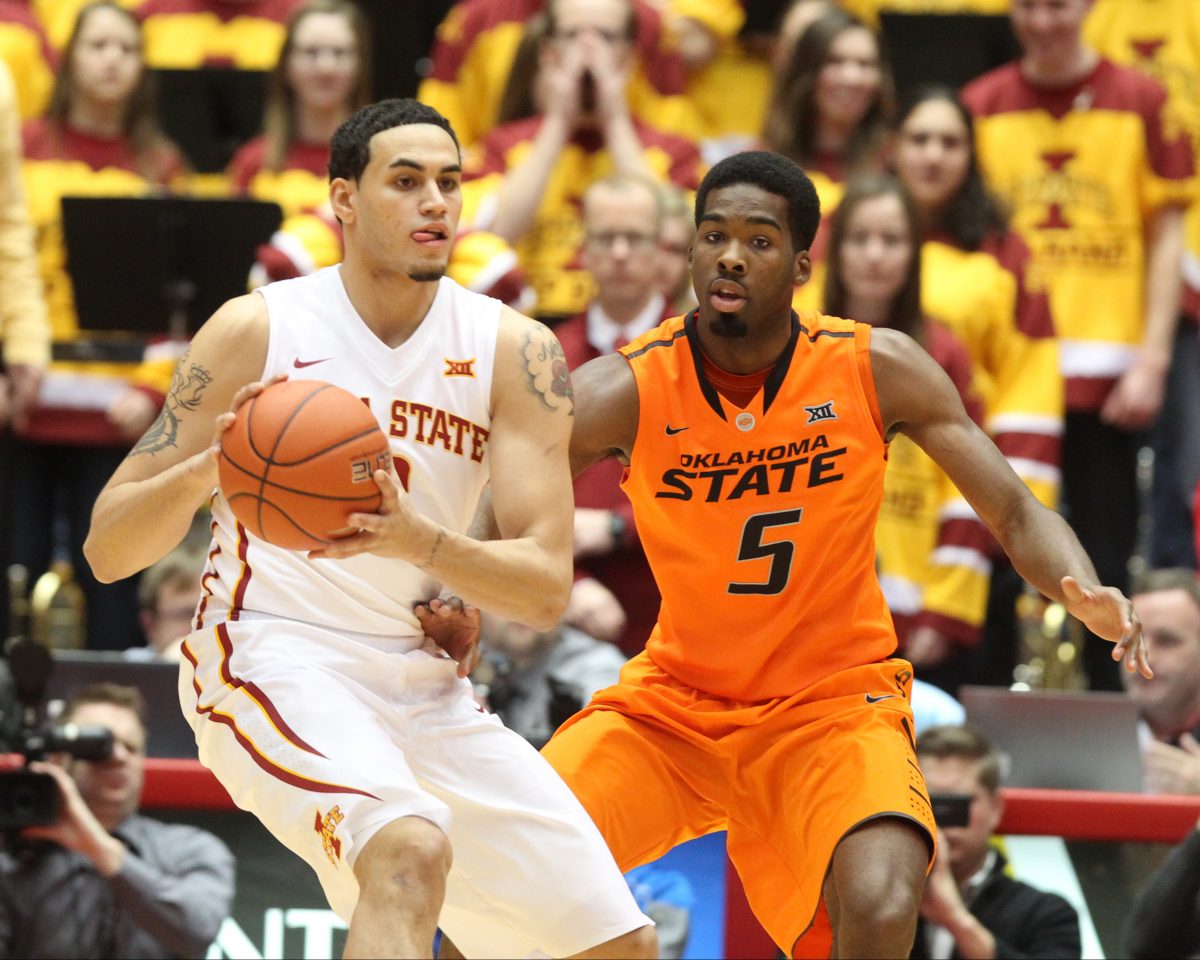 After the debacle in Brooklyn, I took some time earlier this week to look at Iowa State’s scoring efficiency so far this season. It was then that I noticed that in 10 games this year, the Cyclones had scored at 1.10 points per possession (PPP) and in the two losses to Maryland and South Carolina they scored at 0.96 or less. That isn’t exactly a shock, but to me the eye-popping part was the disparity between those two groups with zero performances in between 0.95 and 1.10 (vs UMKC).

It appeared that when things went wrong for Iowa State’s offense, they went really wrong. It can’t be ruled out that the opponent played a role in all of that as Maryland and South Carolina are easily two of the best defenses that Iowa State has seen this year. Though Iowa and Alabama aren’t far behind and Arkansas and Georgia State are respectable as well.

We added a data point after the game with Oklahoma State and the Cowboys slide right between Maryland and Iowa by the Pomeroy defensive efficiency numbers.

But to get to where I’m going, I was trying to find some commonalities in the scoring performances to link the biggest keys in what was hurting Iowa State in those poor showings. One of the best team indicators (outside of effective field goal percentage which will almost always follow the scoring line perfectly for obvious reasons) that I could find that matched up was the team assist rate (team assists divided by the made field goals), which simply shows the percentage of made baskets that were assisted. The assist rate is shown with the blue bars and is aligned to the secondary axis on the right while the red line is the team PPP with the primary y-axis on the left. As the assist rate goes down the red line follows it fairly closely (especially before the Oklahoma State game was added in). One other outlier is the Arkansas game where the PPP was very high with a lower assist rate. That would probably be best explained by a few buckets in transition off of steals and how ISU attacked the Arkansas defense in general by working through isolation plays.

Then, the two clunker performances against Maryland and South Carolina are two of the three worst assist rate games of the season.

It isn’t perfect and the sample is still small, but I think this leads us down a path that makes sense with the ball movement that Fred Hoiberg wants as well as the importance he puts on that assist rate in each game. Most times, if the Cyclones want to score they need to be moving the ball well.

It stands to reason that when a team’s most important and most used players play well on offense their team is likely to score at a higher rate and when they play poorly that isn’t likely to be the case. But what Cyclone players are the key cogs to spur on those performances? Well, I made a graph to find out.

I plotted the Cyclone PPP for all of their games (yellow bars) and matched up different players and their Offensive Ratings with the lines over the top to find trends. I only have Monte Morris, Naz Long, and Georges Niang on this to try to keep it clean and easy to interpret but the table of data is below to see a broader view. I also plotted a line at an offensive rating of 107 which is the average and median rating for all Big 12 players in all games so far this year as the "Mendoza Line".

In the worst scoring games of the season for Iowa State, two or all three of these guys are well below the median, let alone their own season ratings (Niang-110, Long-119, and Morris-124).

In the Oklahoma State game, Long put up great efficiency numbers but he also only took six shots to pair with his two assists, so he wasn’t super impactful (his possession usage percentage was just 11 percent where his season average is closer to 19 percent). Other outliers are Morris playing well against UMKC, Niang against Alabama, and Long was off the charts against Mississippi Valley State.

But, notice how all of the higher scoring performances to the left have almost all of the player data points above the "Mendoza Line" and how that shifts as you move further to the right? There’s been a lot of talk after the last two games about what is going wrong with the offense but while much of the focus has been on Bryce Dejean-Jones (and some of it should be, see the table), Niang, Morris, and Long appear to be the three most crucial in determining the Cyclones offensive performances. The other concern that you can pick up from that table that relates to Niang struggling is that a lot of his poor games have come against the better teams that Iowa State will play. Is that due to the strength of competition or is it a matter of him just not hitting his 3-point shot? It’s tough to tell with the currently small sample size but we do need to see improvement and the old Georges again, soon.

I’m not one to bag on college kids. But, sometimes things need to be pointed out. If you noticed last night Abdel Nader spent the entirety of the second half on the sidelines watching, and, outside of his shooting performance at Iowa, it was completely warranted.

Basketball can get as complex as you want it to be, but in the advanced metric world there are two numbers that can be a jumping off point to learn about new players. The rate at which they are used (in other words, the percentage of possessions that they are on the court where they end the possession with a turnover or an attempted shot) and they’re Offensive Rating.

The more a player is used the tougher it is to keep their Offensive Rating up and many times point guards that rack up a lot of assists tend to have a slightly inflated Offensive Rating.

Below is a table of the key Cyclone contributors sorted by their usage percentage from highest to lowest. Along with that data is their season offensive rating, their effective field goal percentage, their turnover percentage, and the rate at which they get to the free throw line.

(The only accurate way to compare player by Offensive Rating is to also separate them by their percentage of possessions used, so I drew thick lines below Hogue and Thomas to group guys together appropriately.)

Note that Nader is just barely the second most used player but he is clearly in the group of three behind Niang with Dejean-Jones and Jameel McKay. Now compare the rest of the numbers. Of the top nine rotation guys, he has the lowest Offensive Rating by a landslide, the worst effective field goal percentage, the worst turnover rate and he doesn’t get to the free throw line all that often.

Given these numbers, I think you have to scale back his role right now. That isn’t to say he can’t be a useful contributor or that there aren’t other ways to impact the game. But his defense isn’t impactful and his rebounding can be replaced.

I still think he has a role but it is all a matter of his decision making. Clearly Fred trusts him to shoot the 3-pointer because after his 0-9 start this season he plopped him on the wing against Iowa and it was bombs away. But he is now 4-25 from 3-point range and those attempts account for 46.3 percent of his shot attempts. He has to look for ways to attack (without stepping on the sideline which has seemingly happened a handful of times this season) or he needs to be given post up opportunities where I think he can make some things happen.

If he wants to earn time on the court he has to both lower his usage and up his Offensive Rating.

The trick is, can he do that better than Niang? Dustin Hogue? McKay? I’d say he could be similarly successful as those last two, but divvying up the minutes and post touches is the crux of his issue. And, it is only heightened when Niang is on a dry spell from the 3-point line.

I think it is very possible that you could play three of Niang, Nader, Houge, and McKay at the same time but at least one of them has to hit some shots from the outside to make it work really well. Niang and Houge have proven to be capable of that to different extents at varying times and Nader is thought to be capable as well. But right now, that isn’t happening often enough.