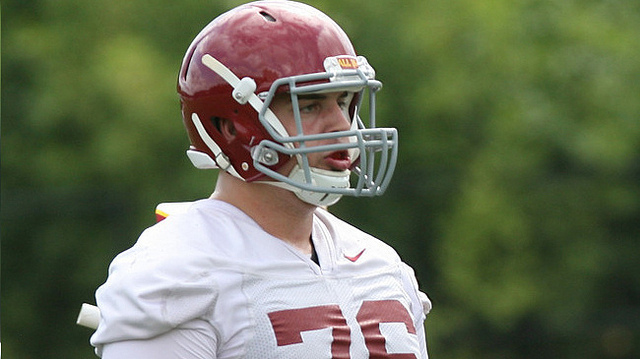 Of course, junior center Tom Farniok partially returned in Iowa State’s 38-21 win over Tulsa on Sept. 26. Farniok, who is still recovering from a bad knee, ankle and a nasty case of the flu, is expected to play near 100 percent for the first time since week one this Saturday at Texas Tech.

“We plan on him being the starter on Saturday at Texas Tech and plan on him going the whole distance if he is able to,” Paul Rhoads said on Monday.

Sophomore guard Jamison Lalk should be back too, yet not at 100 percent. Lalk, who started the Iowa game as Farniok’s replacement at center, also sprained his MCL in the first half of the Cy-Hawk contest. He has been out since and made an appearance on Iowa State’s depth chart (second-string guard behind Daniel Burton) on Monday for the first time since.

“Jamison is right on schedule, a schedule very comparable to what Tom Farniok ran from UNI to his coming back for the Tulsa game,” Rhoads said. “He did individual work yesterday and we plan on him being in pads tomorrow (Tuesday) and practicing with our football team.”

Senior Ernst Brun left the UNI game due to “body cramping” and hasn’t been the same since. However Brun, who caught six touchdowns as a junior, played more against Texas than he did against Tulsa.

“Ernst’s (injury) is about strength and with strength, speed and endurance are going along with that,” Rhoads said.

For the first time in weeks, Brun currently sits along as Iowa State’s No. 2 tight end on the depth chart as walk-on Ben Boesen injured his knee vs. Texas.

“He has a similar knee injury as Tom and Jamison but we don’t feel that it is as serious,” Rhoads said. “We think he will be back sooner than those two were. We are even hopeful for Baylor.”

Who will be Tech’s QB?

Iowa State will be faced with the chore of preparing for Texas Tech’s offense and not knowing who the quarterback will be. Tech’s walk-on true freshman quarterback, Baker Mayfield, has started every game this season for the Red Raiders but went down during Saturday’s rout of the Kansas Jayhawks.

Iowa State now has to prepare for three Tech quarterbacks. There’s Mayfield. There is the man who most saw being Tech’s starter at the beginning of the season, Michael Brewer (he’s been out with a lower back injury but could return at any point in time). Backup Davis Webb has converted on 37-of-70 passing attempts this season with four interceptions.

“When the other quarterbacks have come in, they run their offense," Rhoads said of Tech’s situation. "They run it very efficiently and very effectively. We have to prepare for their runs and throws and tendencies that Texas Tech has executed so far this season and we will continue to do that.”

As is usually the case with injuries, don’t expect to know exactly who will take snaps for Tech until game time, which is 11 a.m. on Saturday in Lubbock.