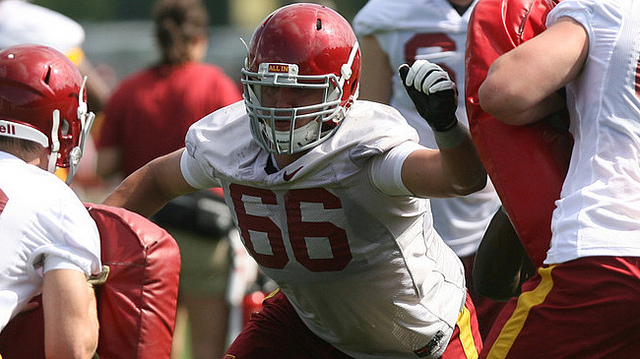 That is one of many challenges that Iowa State (1-5) will face on Saturday when Oklahoma State (5-1) comes to town for an 11 a.m. kick.

As if things couldn’t get any worse up front for the Cyclones, they did on Monday when head coach Paul Rhoads learned the unfortunate fate of yet another big man up front.

Fifth-year senior (tackle) Kyle Lichtenberg might play again this season, but he’ll never be at 100 percent after suffering a serious elbow injury in last Saturday’s loss to Baylor.

“Tommy John surgery is what he is going to need,” Rhoads said on Wednesday night. “They are hopeful that they can fit him for a brace like a bionic man and just see what he is capable of doing with it. We’ll see if we can’t get him some playing time as a fifth-year senior to end his career on the field.”

With Lichtenberg being out, redshirt freshman Jacob Dunning is next up on the depth chart at tackle but it looks like another redshirt freshman, Daniel Burton will be sliding over from guard to fill Lichtenberg’s void (who was filling in for Iowa State’s best tackle, Jacob Gannon who is out with a knee injury).

“Dunning now has to step up as a third guy," Rhoads said.

Along with Tom Farniok at center, expect a rotation of Jamison Lalk,Ethan Tuftee and Oni Omoile at the guard spots. Rhoads did offer up a positive in regards to the health of Lalk, who sprained his MCL on Sept. 15 in a loss to Iowa.

“I really saw Jamison running different on both legs as he practiced,” Rhoads said. “I have had one before. It is just not over night when you hit that magical three or four weeks or whatever it is. You’re not 100 percent healed and especially when you are having to use that much torque on every single snap.”

Finally, senior cornerback Jansen Watson will make his return to Iowa State’s lineup this week. That’s what Rhoads said midweek at least. Obviously, this will be a big deal for Iowa State’s defense.

“Jansen Watson is an NFL cornerback,” Rhoads said. “Whether he makes a squad will remain to be seen but he will be in a training camp and will quite possibly be drafted.”

Rhoads also noted significant growth in the play of Nigel Tribune, a true freshman who has started in place of Watson the last two weeks.

“Nigel is a good player and Nigel has grown up since a particular part in the Texas Tech game where he wasn’t playing with the confidence that a defensive back needs to play,” Rhoads said. “I think he is doing some good things. He is still making some young man mistakes out there on the field but he is talented."

Coe is getting better

Their weren’t many, but here’s a positive from the Baylor game. Junior defensive tackle Rodney Coe might have played his best game as a Cyclone, recording seven tackles in the loss.

“He was very active," Rhoads said. "He started using his hands better. He started getting off of blocks better. There is crawl, walk, run as far as the progression goes and he is finally getting to the point where he can run a little bit.”