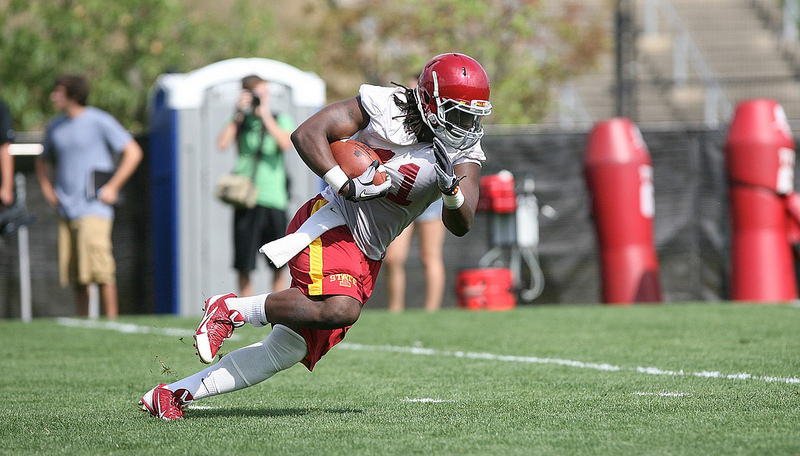 AMES — It only two took games and a pair of bye weeks for E.J. Bibbs to earn the job as Iowa State’s starting tight end. In a somewhat surprising move, Bibbs, a junior out of Arizona Western C.C., jumped senior Ernst Brun on Iowa State’s depth chart for Thursday night’s road trip to Tulsa.

“I think E.J. is coming along and continues to show more and more from game one to game two and on the practice field,” head coach Paul Rhoads said during his Monday press conference. “He is an exceptional athlete with very good hands.”

It’s a curious move due to the fact that Brun caught a team-high six touchdown passes (tied with Josh Lenz) as a junior in 2012.

As has essentially everybody on Iowa State’s offense, both Iowa State tight ends have struggled so far in 2013. Bibbs has tallied four catches for 13 yards while Bruns’ numbers are two and six.

It is notable that Brun left the season-opener vs. UNI due to “body cramping” and limped through preparation for the Iowa game due to the same issue.

Last week Tom Farniok’s status for Tulsa was a question. Now, it is a fact. The 6-foot-4, 295-pound center is scheduled to start against the Golden Hurricane.

As expected, junior Ben Loth is listed as Farniok’s back-up on the new depth chart. Jamison Lalk, who left the Iowa game with a sprained MCL, will not play on Thursday night.