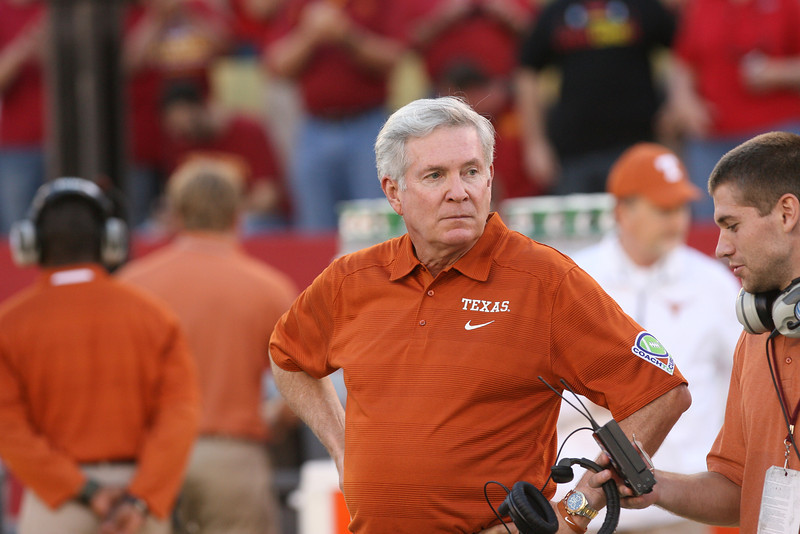 AMES — What happens when you “reprimand” a player for a cheap hit instead of actually punishing him? Well, he doesn’t learn from the situation.

That is exactly the scenario going on in Austin, Texas right now, regarding wide receiver Mike Davis after his dirty hit on Iowa State’s Deon Broomfield in last Thursday night’s 31-30 Longhorn victory.

During his Big 12 teleconference on Monday morning, Texas head coach Mack Brown was asked about the cheap shot. His response, via the Twitter account of David Ubben from Fox Sports Southwest…

Mack Brown on Mike Davis hit: Met with him on Saturday. Showed play to entire team. Admits he hit after whistle and called hit "wrong."

So one would only assume that Davis would be on the same page as his coach after this team meeting correct?

Not so fast my friend.

“If we have another run-pass situation, I’d do the same thing,” Davis said on Monday in a quote from the San Antonio Express News. “If the (defensive back) is loafing, he deserves to get cut.”

Davis also noted that this hit was blown out of proportion and "wasn’t that bad."

Forget the fact that Davis is a grown man for a moment. For the sake of a good argument, I’ll cut him some slack on this one. You want to know who I fault for this public relations disaster in Austin? I’ll throw the blame on that athletic department as a whole and specifically the sports information office.

For the love of the football gods, do not make Mike Davis available to the media! If the kid isn’t going to toe the company line here, do not let him talk! He is only making a bad situation look even worse. If he doesn’t make those comments today, this story would have been dead by Tuesday with the Red River Shootout less than a week away.

Deon Broomfield, the Iowa State defensive back on the receiving end of the play, handled questions about Davis’ comments with class on Monday morning.

"I don’t know how you loaf after the play is done but it is what it is," Broomfield said. "I was mad about it when it first happened but it is behind us now."

Iowa State head coach Paul Rhoads, who has already been "reprimanded" (whatever that means) by the league for his critical comments about officials following the game, did not want to discuss the incident on Monday.

“It has no affect on our preparation for Texas Tech and that’s what I’m focused on," Rhoads said.

Luckily, Rhoads is right. The hit will not affect Iowa State’s preparation for Texas Tech. Had Broomfield’s career had come to an end thanks to the hit, that wouldn’t have been the case though.

Texas’ date with Oklahoma will kick off at 11 a.m. on Saturday, as will Iowa State’s road trip to Texas Tech.

Williams Blog: TCU to Big 12 a good thing for Cyclones