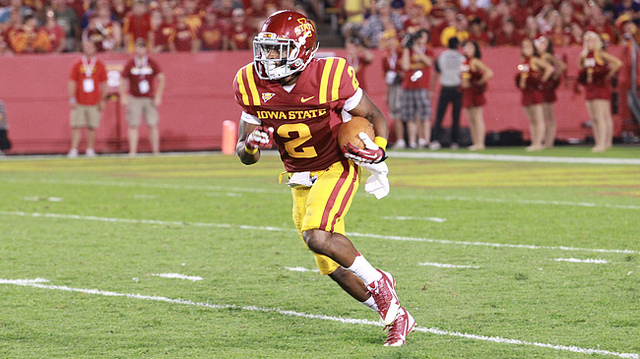 The good is that leading rusher Aaron Wimberly, who missed the majority of the second half of Iowa State’s recent 42-35 loss to Texas Tech, should be ready to go at 6 p.m. this Saturday. Wimberly injured his shoulder and back in the third quarter of the loss to Tech.

“He was banged up enough, shoulder and his back tightened up on him,” Paul Rhoads said during his weekly press conference. “He got a massage this morning on that. I don’t think there will be anything hold him back.”

Wimberly did practice on Sunday.

“I saw him throw his hand up, I don’t know which one, but even with a bad shoulder you don’t throw your hand up to make a catch like he did yesterday in practice if you are hurting that bad,” Rhoads said.

Iowa State’s starting senior cornerback Jansen Watson missed the entire Texas Tech game due to an ankle injury that he suffered vs. Texas. Rhoads noted that Watson is expected to play against Baylor’s top-ranked offense.

“It gives us depth and gives us fresh legs especially when you are having to defend as many speed receivers as they have and as many as they are going to throw at you,” Rhoads said in regards to Watson’s return to the lineup.

The not-so good news revolves around the health of Iowa State’s offensive line that has been banged up all season long. Iowa State was hopeful that junior tackle Jacob Gannon’s knee injury from Saturday wouldn’t keep him out this week.

“We were hoping after the game that he wasn’t as bad as Tom (Farniok) and Jamison (Lalk). It appears to be that way,” Rhoads said. "He probably will not be available.”

Senior Kyle Lichtenberg is expected to fill the void. Lichtenberg has started 18 games in his career.

The drama that is the health of quarterback Sam Richardson will also continue on in Waco. The sophomore is healthy enough to play, but that’s about it. Until he looks healthier on the field, questions from fans about backup quarterback Grant Rohach are going to continue to rise.

“His strength is that he doesn’t have any weaknesses.”

After his 95-yard kickoff return for a touchdown vs. Texas Tech, Iowa State junior Jarvis West was named the Big 12’s Special Teams Player of the Week on Monday.

“Jarvis is an electric player,” Rhoads said. “This is the player that we recruited. He is stop and go quick. He made some exceptional cuts in that kickoff return to end up in the end-zone and is definitely a weapon that kept us in the football game.”

Iowa State will host Oklahoma State on Oct. 26. Kickoff will go down at 11 a.m. and the game will be televised on Fox Sports Net.