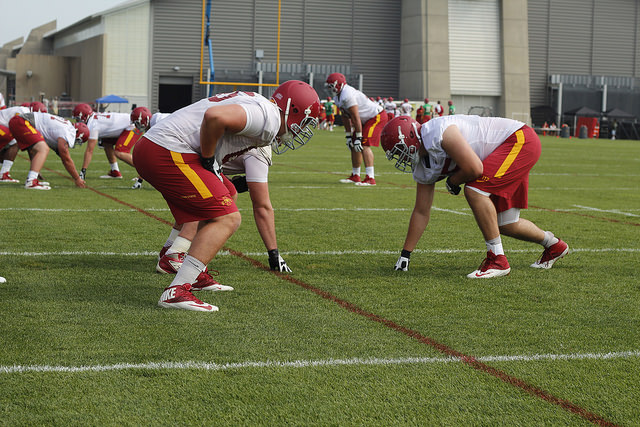 AMES — The Cyclones have yet to pad up so far in fall camp but when it comes to naming a starting offensive line, that doesn’t really matter. Paul Rhoads is confident that his group is set for the 2014 season opener vs. North Dakota State.

“I think we have a starting five right now with (Brock) Dagel, (Daniel) Burton, Tom (Farniok), Oni (Omoile) and Jacob Gannon,” Rhoads said after Tuesday morning’s practice. “The other guys provide us great depth and I have always believed whether I was a coordinator or a head coach that the more guys you can play, the better it is for your conditioning, your freshness, your morale and so just because Dagel and Gannon are the starters, it doesn’t mean that Campos and (Jacob) Dunning couldn’t play. Do they have to get a high number of snaps with the ones for timing next to that guard? Not necessarily. So yeah, I think our starting five is who they are right now unless somebody makes a strong push and beats one of them out.”

The offensive line made news on day one of camp (Monday) too when backup center Ben Loth went down with a left leg injury. According to Rhoads, Loth is currently experiencing swelling and will undergo an MRI on Thursday.

“He already kind of knows the position,” starting center and team captain Tom Farniok said. “It isn’t like this was a total shock and he had never done center before. In spring ball they let him take a few reps at center just because he was a swing guy. For him, he had been working some two-center before too. Ben was obviously the No. 2 center but it wasn’t like Lalk is being thrown into the fire. He would come to our center meetings and he knew the calls.”

Last season’s string of injuries on the offensive line should help Iowa State in 2014. Add all of the Cyclones together and the current offensive line has 86 starts to its name.

Two newcomers should provide extra depth this season too.

The first is Jake Campos, a highly touted 2013 signee out of West Des Moines who chose Iowa State over a handful of heavy hitters. On Tuesday, Rhoads was frank about Campos’ future in a Cyclone uniform.

“I don’t know if it is faster than to be expected because he is a dang good player and his recruitment showed that,” Rhoads said. “It is hard to play as a redshirt freshman on the offensive line or the defensive line for that matter. He might get forced into it a little bit. I don’t know how Brock (Dagel) will be able to go every snap of this season because of his knee from the spring so Jake will have to be ready.”

Campos arrived in Ames as a true freshman at 255-pounds. He is now up to 285. Campos is listed as a second-string left tackle behind junior Brock Dagel, who missed the spring due to a knee injury. Rhoads noted that Campos took a handful of snaps with the ones on Tuesday.

Junior college transfer Wendell Taiese was brought in to provide immediate depth and so far, it appears that the 357-pound guard will do just that.

“So far he is a strong player,” offensive line coach Brandon Blaney said. “He is really strong but we haven’t put the pads on. Everything is hypothetical until we can go out there and swing. But the neat thing about it is watching him out there, he has a lot of natural strength. We have to get him acclimated to the offense and acclimated to the tempo that we are going. We need a little more experience with the language that we are going to be using as an offensive line but I have full confidence that he is going to develop into being a pretty good football player.”

LALK A FUTURE CENTER?: What will life after Tom Farniok be like for Iowa State’s offensive line?  Jamison Lalk’s move to center could be a hint. Barring injury, sophomore Daniel Burton, who Rhoads has said has All-Big 12 potential, will be the starting right guard in 2015. So far, Oni Omoile has beaten Jamison Lalk out at left guard. Lalk and Omoile will both be seniors next season. Moving Lalk to center permanently appears to be a very real possibility. As it stands now, redshirt freshman Nick Severs would be his top competition.

PUNTER COMPETITION: True freshman Colin Downing is the favorite to be Iowa State’s starting punter this season but it isn’t a lock. “Holden Kramer is a walk-on from West Des Moines Valley and is much improved from where he was a year ago,” Rhoads said. “We have a competition taking place there. Holden probably punted better yesterday than Collin but Collin had a better day today.”

BE PATIENT: Tom Farniok on the development of redshirt freshman Jake Campos: “His big thing is that he is just young. People don’t understand that with offensive linemen that when you are a young guy, it is totally different than like me being a senior. I went though the whole thing so obviously I understand it. It is just like being a quarterback when you are young. A young quarterback is going to have some mess ups and have some things go wrong that a third-year quarterback isn’t going to have happen.”

CAMP SCHEDULE: The Cyclones will continue to wear shoulder pads and helmets on Wednesday and Thursday of this week. Everything will ramp up on Friday as a morning scrimmage is currently scheduled for Saturday.