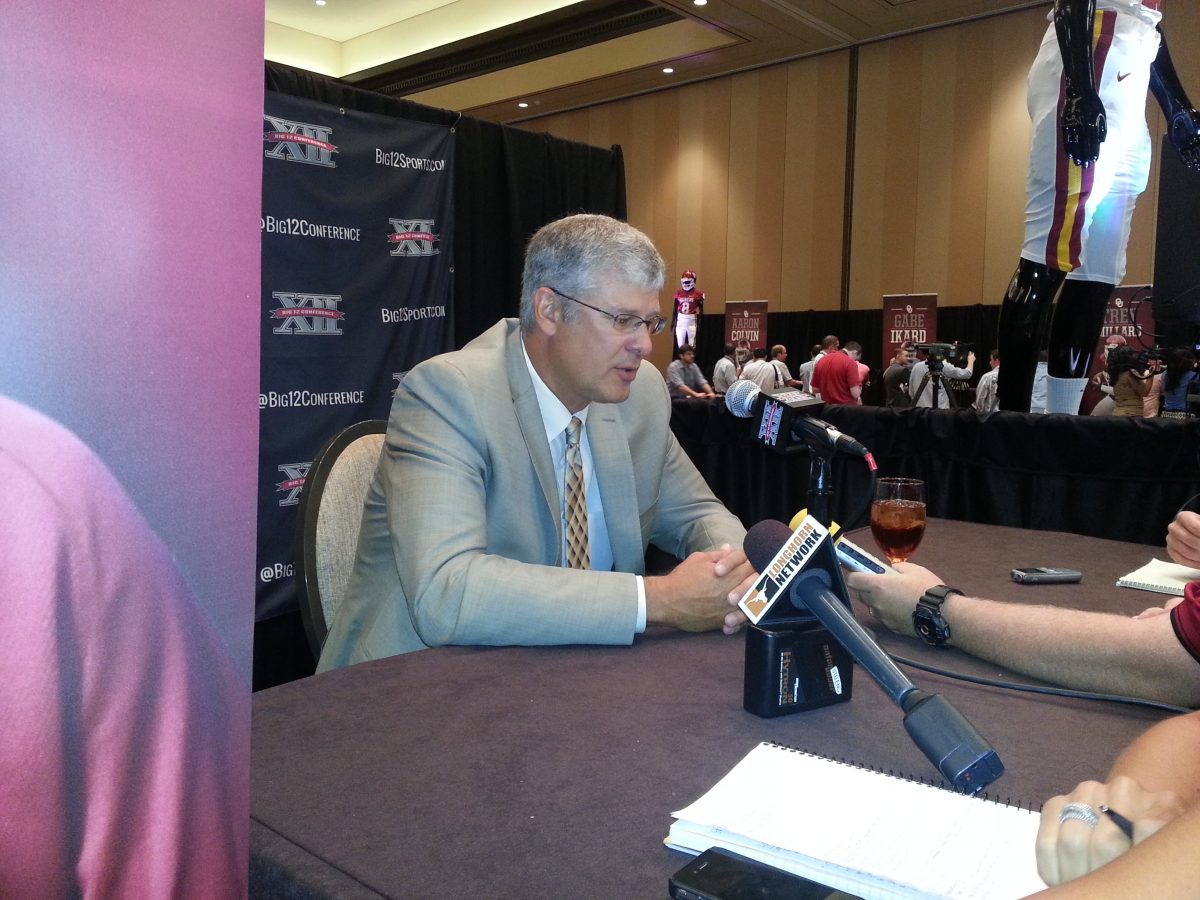 DALLAS — Fall camp is just around the corner and Iowa State released its first depth chart since the beginning of spring football on Monday afternoon. During his Tuesday media session in Dallas, Cyclone Fanatic caught up with Paul Rhoads to discuss a number of personnel matters.

Is the reason David Irving is listed as a third-string defensive end simply because he was injured in the spring?

“He hadn’t played. He hasn’t been healthy,” Rhoads said. “It’s hard to establish yourself as a one or a two, especially when you haven’t been out there. We’re really happy with the rehab work that he has done this summer. David has started to grow up a little bit. It always happens at different stages for different people. His growing up, his maturity mentally and physically is important to us as we move forward. He is a very talented football player.”

Irving, a 6-foot-7, 272-pound junior, currently sits behind Cory Morrissey and Nick Kron on the depth chart at right defensive end. Irving missed all of spring practice due to shoulder surgery.

What is he expecting out of junior college defensive lineman Rodney Coe?

“He has got to play right away,” Rhoads said. “With Collin Bevins leaving our football program, Rodney is definitely a tackle and is definitely a guy who has got to step on the field for us in his first year here. He knows that. He is excited about that. He has the tools but there is a transition that takes place no matter what the position from junior college to the four-year game. We need him to go through that quicker rather than later.”

Coe is listed as a second-team defensive tackle behind junior Brandon Jensen.

Since true freshman Alton Meeks is on the two-deep, does that mean he isn’t going to redshirt?

“We would still prefer to redshirt Alton if we can,” Rhoads said. “The fact that he was here in the spring will probably give him a leg up and more reps during fall camp than some of these other freshman who are out there and coming in. We’ll sit how it goes, see how it develops and go from there.”

What did walk-on Justin Coleman do to earn a spot as a starter at wide receiver?

“He has really worked hard and improved everything about his game,” Rhoads said. “I remember when he first got on campus he wasn’t catching the ball very well so I asked him, ‘So you’re just going to be a special teams guy huh?’ Catching the ball is pretty important at that position so from that point on, he has taken the seriousness of catching the ball, running the proper routes, importance of blocking, importance of being a special teams player and really put himself into a position to contribute.”

Any update on Shontrelle Johnson?

“A year ago he was in a very similar situation,” Rhoads said. “He gets cleared and he comes back and he goes out there and has a great camp and goes for over 100 yards in the first game. Then that disappeared a little bit. I am anxious to get that player back on the field and see the excitement that he brings to the position and our football team and I know however excited I am, it pales in comparison to however he is feeling.”