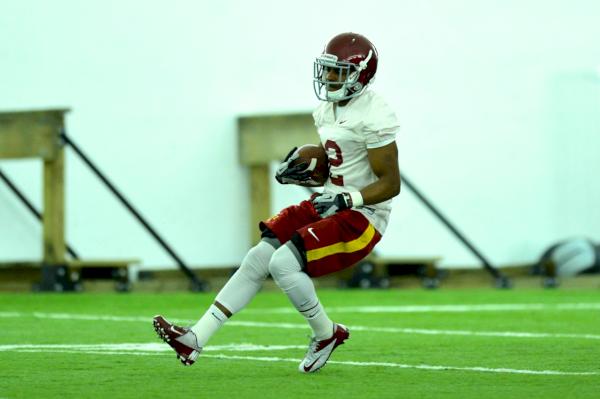 Today’s Cyclone Fanatic Mailbag is brought to you by Phillips’ Abbey Carpet and Floors. "We Stand Behind What You Stand On." Visit PhillipsFloors.com today for more.

The offseason is near but have no fear, the Cyclone Fanatic Mailbag is here.

How’s that for a rhyme on your Tuesday? Pretty awesome huh?

I have to admit – you all impressed me with the well thought out questions you came up with for this installment of the Cyclone Fanatic Mailbag. Some good stuff…

Let’s begin today with a football question via CarlHungus.

CarlHungus writes: Which one of the incoming football players (freshmen, RS freshman, JUCO transfer) will have the biggest impact in your opinion this upcoming season?

CW: That is a phenomenal question and one that is difficult to give a quality answer to as I write this on April 2. How about I give you three of four guys instead as I don’t want to leave anybody out?

Both Iowa Western Community College transfers come to my mind immediately. Aaron Wimberly, a running back, brings a playmaking ability to the offense that Iowa State has lacked over the last few years. I saw him in Iowa State’s open practice last week and was blown away by his speed. The Cyclones weren’t padded up and nobody was hitting but still, the speed was impressive. On the defensive line, I find a scenario hard to imagine where Rodney Coe isn’t in the mix somewhere – my money has him in the middle as that’s where he is needed the most.

E.J. Bibbs has to be mentioned here via the tight end position. The more I learn about this Pistol offense, the more I think we’ll see a lot of two tight end sets featuring Bibbs and Ernst Brun in 2013.

As far as redshirt freshmen go, two defensive tackles, Collin Bevins and Pierre Aka are going to play. Paul Rhoads and Wally Burnham aren’t going to have much of a choice. Those guys are already big so physically they should be fine. As I wrote about here, it’s all about finding that Big 12 level of toughness at a young age. That’s the key.

Two other redshirts to keep an eye on in my opinion are Dondre Daley at wide receiver and Charles Rogers at defensive back. I’ve heard nothing but great things about each of these guys since the day that they stepped on campus last June.

Two more (I can’t get enough) who have a legitimate shot to see the field are Luke Knott at WLB and Cole Netten at kicker.

There are others too as I mentioned above. It is very early to be doing this and I apologize for leaving anybody out.

CycloneNorth writes: How will this year’s offensive line be in comparison to last years?

It is hard telling but I do know that new offensive line coach Chris Klenakis has been wearing the guys out. He’s as intense coaching as I am while watching a NASCAR race.

I like the fact that Shaban Dika will finally be able to play, although it is impossible to know how long it might take him to shake the rust off of missing the last three seasons. The rest of the guys (Jacob Gannon, Tom Farniok, Ethan Tuftee and Kyle Lichtenberg) all have a ton of experience though. That is encouraging.

But who knows what Klenakis is doing differently than these guys have seen in year’s past? Last year’s line was a big disappointment in my opinion so it is hard for me to imagine this group not getting better in 2013.

State43 writes: Which 3 WRs are going to be the most active this season you think? (Discounting TE’s)

CW: Well the spring depth chart has Tad Ecby, Jarvis West and Quenton Bundrage listed as starters. If I had to guess right now, I’d say that Bundrage leads the team in receiving yards next season with West right there with him. It gets tricky when trying to come up with that third guy. My head says to go with senior Albert Gary (pictured below), a guy who has shown a lot promise at different points of his career. The wildcards here are Tad Ecby and Dontre Daley. Both of them bring length to this group. Ecby has a year on Daley but both are obviously talented. I’ll go with Gary as the third man but like I said, it is a toss-up. Clones21 writes: Out of the running backs, who has most rushing yards this upcoming season in your opinion?

CW: You are fishing for me to write Aaron Wimberly here aren’t you?

It is tempting but how does a guy not name James White as the odds on favorite? He’s led Iowa State in rushing the past two seasons and is constantly overlooked.

Having said all of that, if Shontrelle Johnson is healthy, he will likely be the guy.

Throw Jeff Woody, DeVondrick Nealy and Rob Standard into the mix and you’ll see that it is a crowded backfield so really, this debate means next to nothing. All of these guys will be major contributors.

Clonefan32 writes: How many quarterbacks see time this year?

CW: Probably two. Sam Richardson and Grant Rohach (pictured below). There is no way that Richardson takes every single snap. There will be blowouts, good or bad for Iowa State, in which Rhoads will want to get Grant some in-game experience. And who knows…If Richardson struggles, maybe Rhoads will go to the bullpen a time or two. It isn’t like Rhoads has a history of sticking with one quarterback…Quarterback controversies are becoming an Iowa State tradition. Rabbuk writes: Will there ever be a day where I can trust a man in black and white shirts with vertical stripes?

CW: Referees are like message board posters. Ninety-eight percent of them are great. It’s that other two percent that bite you.

IHavNoCyCash writes: What are your way-to-early preseason men’s basketball standings for next season?

CW: A brutal question…brutal as in hard.

That’s nearly impossible to answer, as I don’t know who is going pro, who is transferring, etc. I assume you are interested in Iowa State specifically though right?

Well I know that the Cyclones should be better than Texas, Texas Tech and TCU again. I also know how much Oklahoma is set to lose, which is a lot. Granted, Lon Kruger has recruited well over the last year so it won’t be a huge dip but I doubt the Sooners are as good as they were a year ago.

Kansas State losses some artillery but still should be near the top of the league.

Iowa State is going to drop off next year in my honest opinion. I actually think that next year’s Iowa State season will look a lot like what you saw from the University of Iowa this season. Young. Talented. Right below the bubble and in the NIT. I’m thinking seven, eight or nine wins in the Big 12. I’d lean towards eight or nine.

Stay tuned though. A lot will change between now and October.

Thanks for all of the great questions everybody. I sincerely apologize if I didn’t get to yours. I will try to get them all next time. Remember that you can always PM me questions if you have them in advance.