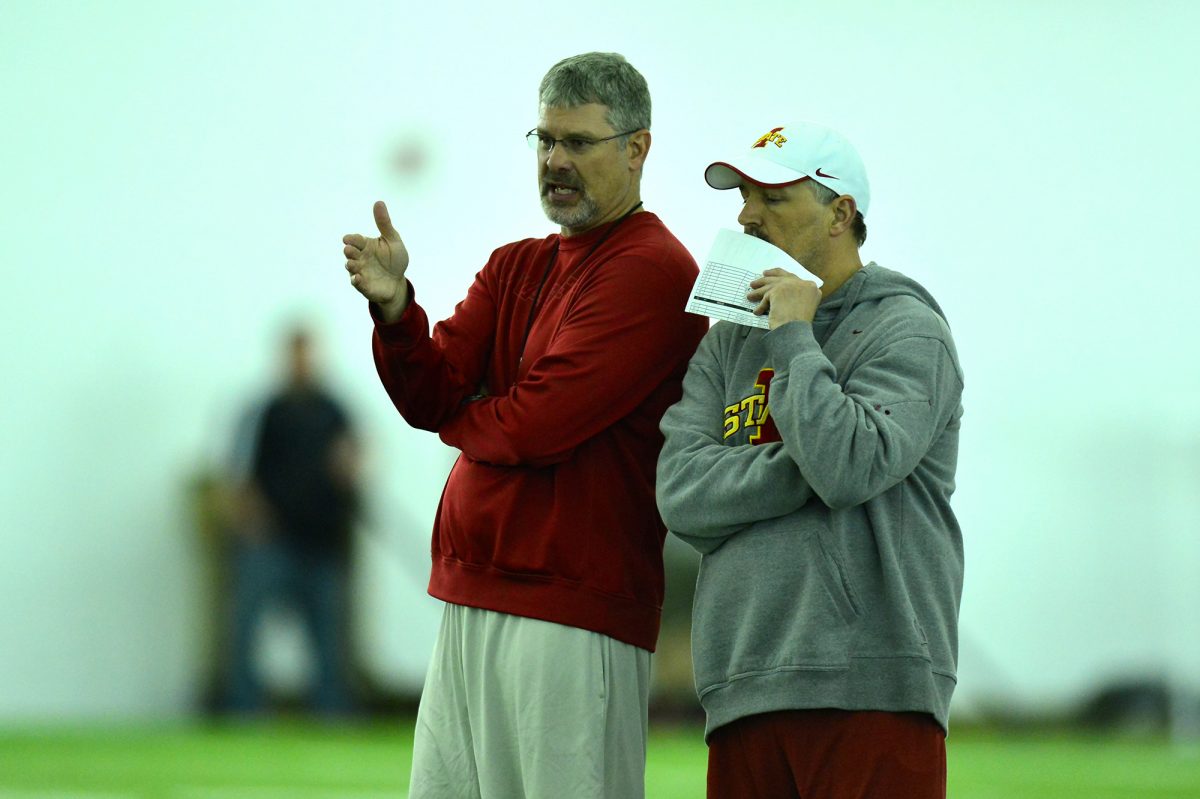 Welcome to the “offseason.”

You know I remember back in the day, really, nothing happened from May to August. Anymore though, there’s that 365 day a year recruiting cycle. That fickle mistress known as realignment constantly seems to give us (writers) fits (although the latest news out of the ACC makes me feel like that won’t be the case this summer).

Anymore, stuff always seems to be happening and as always, we’ll be all over it all summer long here at Cyclone Fanatic.

Until then though, I figure today is as good of a time as ever to go position-by-position with my final thought on Iowa State’s spring football season, starting with the obvious.

Sam Richardson is the guy but I actually feel like this non-competition is probably more of a competition than we know about. I write that solely based off of what I saw during Saturday’s spring game, which likely isn’t fair to Iowa State’s No. 1 guy.

It isn’t like Grant Rohach looked like Joe Montana out there, but No. 3 showed everyone in attendance that he most definitely has the physical tools to be a good one some day.

Sam has poise and yes, I think that Iowa State can win with him. But Rohach has an undeniable upside to consider as well.

I like both of these guys a lot and truly believe that the quarterback position is in good hands for years to come at Iowa State.

Without question, this is the position group that stood out to me on Saturday.

DeVondrick Nealy looked like the best back on the team and Aaron Wimberly showed us a glimpse of what he can be as well.

Jeff Woody is Jeff Woody, once only a bruiser who is now a versatile bruiser (which I love by the way). I really do. Why not give one of the smartest guys on your team more responsibility? This one makes complete and total sense.

What’s most encouraging to me is the fact that the James White’s and Shontrelle Johnson’s of the world aren’t being talked about much. Both are still quality backs. Both are still in the mix. Both will likely see significant playing time in 2013.

But the recruiting at this position has gotten better and better over the last five years and hopefully 2013 will be the year that we see actual results on the field that prove the above statement to be correct.

And don’t think for a minute that I’m not factoring Iowa State’s offensive line into this. If the running backs are great and the line is below average, results will not improve. If the running backs are better and the line improves as well, that’s when that ever-so important scoring offense number will start to rise for the Cyclones, which really is the key to 2013.

I’m a big Quenton Bundrage guy. I think that he could be a special one when his career is all said and done here at Iowa State.

Having said that, Iowa State is anything but deep right now at wide receiver. In addition to that fact, I think we will see more two-back/two tight end sets in Ames than at any time in recent history next fall. So find me three wide receivers to consistently throw out there and put some fear in the opposing defensive coordinators.

You’ve got Bundrage and Jarvis West for sure. You’d like to think that the combination of Albert Gary, Tad Ecby, Dondre Daley and Justin Coleman can by that other guy.

From the beginning of spring until now, I’d say that the stock has risen for Iowa State’s young group of wide outs.

I’ve never felt so good about this position at Iowa State.

The combination of Ernst Brun, E.J. Bibbs and Jeff Woody (here and there) could have a big fall.

I thought it looked very physical on Saturday, which was encouraging.

Still, I’d say that this is the group (on offense) that I am the most unsure of now that spring ball is in the rearview mirror. Shaban Dika’s recent setback was a curve ball for me. I just don’t know where they are going to go with individual guys on the line.

However, the good news is that they have plenty of numbers there. Not a ton of experience, but numbers galore. Options are good. I like the direction this group appears to be moving in under Chris Klenakis’ leadership.

Plus, Tom Farniok, Ethan Tuftee and Jacob Gannon is a fine core to have. Now it’s time to add those pieces.

When you factor in that both David Irving and Rodney Coe did not participate in spring ball, it really is hard to tell.

Hopefully Irving’s “light” will come on and he will take that big step forward this fall. Having said that, missing the spring due to injury certainly didn’t help anything.

And as I wrote on our forum Sunday, with Coe, I fully expect him to come in and at the very least compete for a starting job. From an expectations standpoint, anything more than that is bonus. He is highly touted, yes. But he is still a JuCo defensive lineman. You just never know.

Willie Scott might have been the most impressive defensive player in the spring game. A Scott/Irving combination at defensive end with a little Cory Morrissey/Nick Kron actually might not be that bad at all.

But again, what happens up the middle? It’s still a guessing game at this point.

Buy your stock in these guys early because it is rising at a lightning fast rate.

I still think that Luke Knott will play quite a bit next season. Remember that he is a former defensive back and is more athletic than Miller. Against some of those Big 12 spread attacks, Knott could be a nice weapon.

It isn’t a deep position at all but I like what Iowa State has, especially when you consider who they are being asked to replace.

As I wrote on Saturday, when you consider what Iowa State’s defensive line looks like for next season, I think that Jeremiah George will be a first-team All-Big 12 linebacker at the end of 2013.

There is nothing to see here.

As was the case heading into the spring, when factoring talent and depth, Iowa State’s secondary is one of the top units within the program. Paul Rhoads boasts three senior anchors of the unit in Jacques Washington (FS), Deon Broomfield (SS) and Jansen Watson (CB). The Kenneth Lynn, Sam Richardson, Charlie Rogers combo is more than ready to fill in at that other cornerback spot.

Actually, I’ll be surprised if we don’t see both Cole Netten and Edwin Arceo a lot next season.

Based off of what I saw on Saturday, Netten appears to have the stronger leg of the two so perhaps we’ll see him on kickoffs?

Having said that, Arceo was good from 50 and out last year so who knows. It really isn’t fair to judge these guys based off of one scrimmage in April.

The “experts” usually tab Iowa State to win anywhere from four to six games every season. Due to the large amount of youth on this year’s team, that number will probably drop from three to five games this summer. So get ready for that. It is inevitable.

I feel better about this team after the spring than I did going into it, which is natural. I guess we don’t actually know what kind of talent Iowa State has but all of the signs coming out of Ames are positive.

My guess is that the Cyclones will once again exceed what the expectations will be. Should that result in another bowl game is still a question.