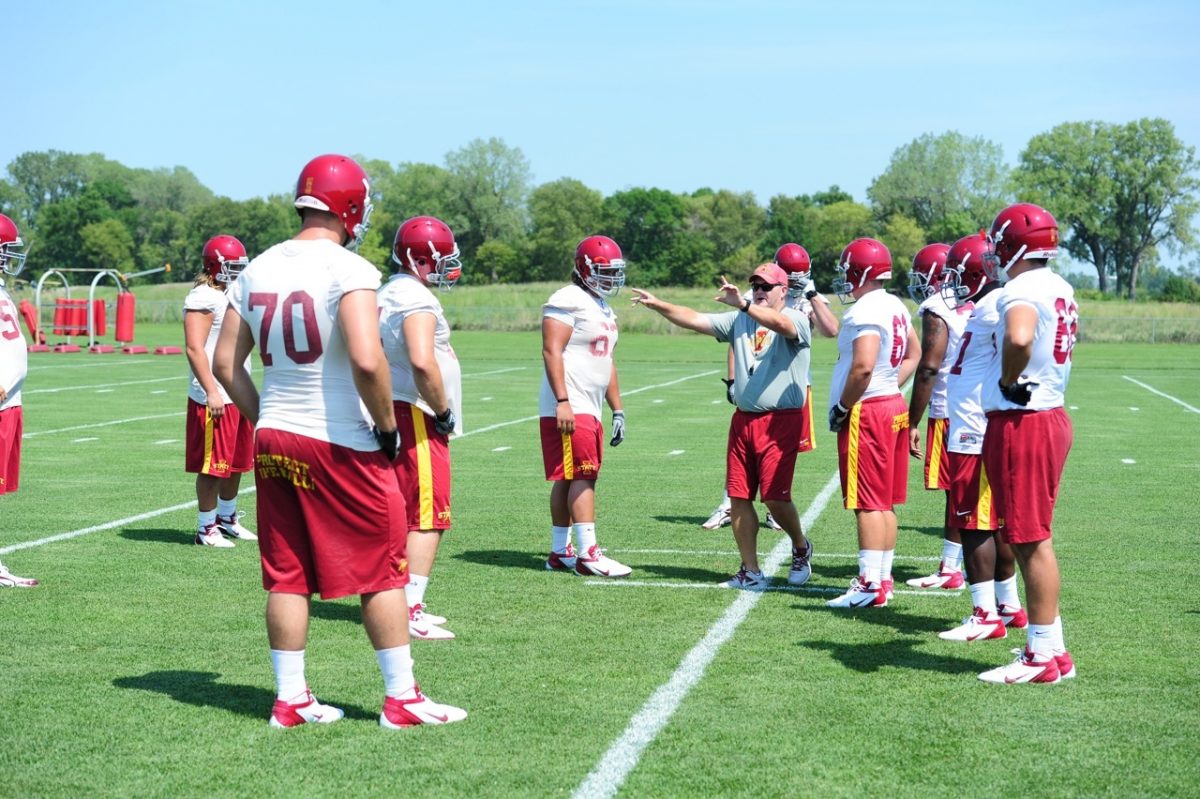 There’s been a lot of talk about Iowa State’s offensive line over the last few days so I thought now would be the perfect time to throw out some extra nuggets from a one-on-one interview I conducted with Bill Bleil last week at Media Day.

The other day, I was putting together a Iowa State football scholarship chart for the new Cyclone Fanatic that you’ll likely log onto next week. When I finished this task and sat back to look at the final product, something stood out to me. It was a fact that in my head I already knew, but seeing it on paper really made raise an eyebrow. Heading into the 2012 football season, Iowa State has 15 scholarship offensive linemen on its roster. Eleven of those men are freshmen or sophomores.

Normally that’s a bad sign for the present day.

Yet Bleil told me that in 25 years of coaching this position, this is the deepest line he’s ever worked with. Injuries last season that forced youngsters like Jacob Gannon and Kyle Lichtenberg to cut their teeth with a guy like Tom Farniok already starting set this line up to have a positive future.

“It’s huge when you look at the amount of reps that those guys got just because of injuries and stuff,” said Bleil. “We went into the first game last year with three guys who had never taken a snap. This year, everybody has had 100 snaps and on the offensive line, that’s really what matters – experience.”

Iowa State has six linemen with starting experience returning in 2012. The day that Paul Rhoads took over at Iowa State’s head coach, his recruiting game plan was very clear. Start in the trenches and work your way out.

“I think that Paul had a great plan coming in. With linemen, you’ve got to recruit them early and you’ve got to take them early and we did,” said Bleil. “The second recruiting class we took five. With those things, you have to be patient. You want to take kids who are tall and athletic and they are now starting to be 300 pounders that we like and are playing. It’s fun. We feel good about it. This is as probably as deep as I’ve been as an O-Line coach in 25 years. You can never have enough depth.”

Iowa State’s philosophy when recruiting offensive linemen, especially at the tackle position, is to go for the long and athletic type. Think a high school tight end’s body. You want something to build on.

“They are very athletic and that’s what we’ve gone for, especially at the tackle position,” said Bleil. “We’ve taken a lot of tight end, defensive end body-types at 6-foot-6, 6-foot-7 who played tight end and defensive end in high school and grown into that offensive tackle body.”

This trend of recruiting lengthy, athletic linemen is continuing on with the 2013 class. Iowa State has verbal commitments from three linemen already in the class. All three are 6-foot-4 or taller.

— Lichtenberg and Gannon are stuck in a dead heat to become Iowa State’s starting right guard on Sept. 1 against Tulsa. Both will play a lot this season. That’s the nature of the beast on the offensive line. But somebody has to be No. 1 on that depth chart in a few weeks. Lichtenberg played tackle a season ago. I asked Bleil about his transition to guard.

“He’s a really good football player who has played predominantly at tackle,” said Bleil. “He’s a guy who doesn’t carry a lot of body fat. Because of that, he had troubles gaining weight. This year, he’s finally over 300 pounds. We really think he is going to have a good two years.”

— As for a couple of guys who haven’t gotten much press at this point in their careers, Bleil specifically pointed out Bob Graham (So. LG) and Jamison Lalk (Fr. RT) as linemen who were impressive in the spring.

“Kudos goes to those guys. They worked hard,” said Bleil. “They aren’t waiting for their turn. They are making people play hard.” 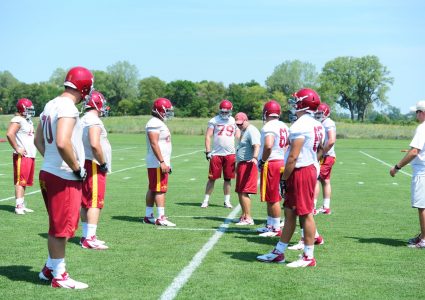