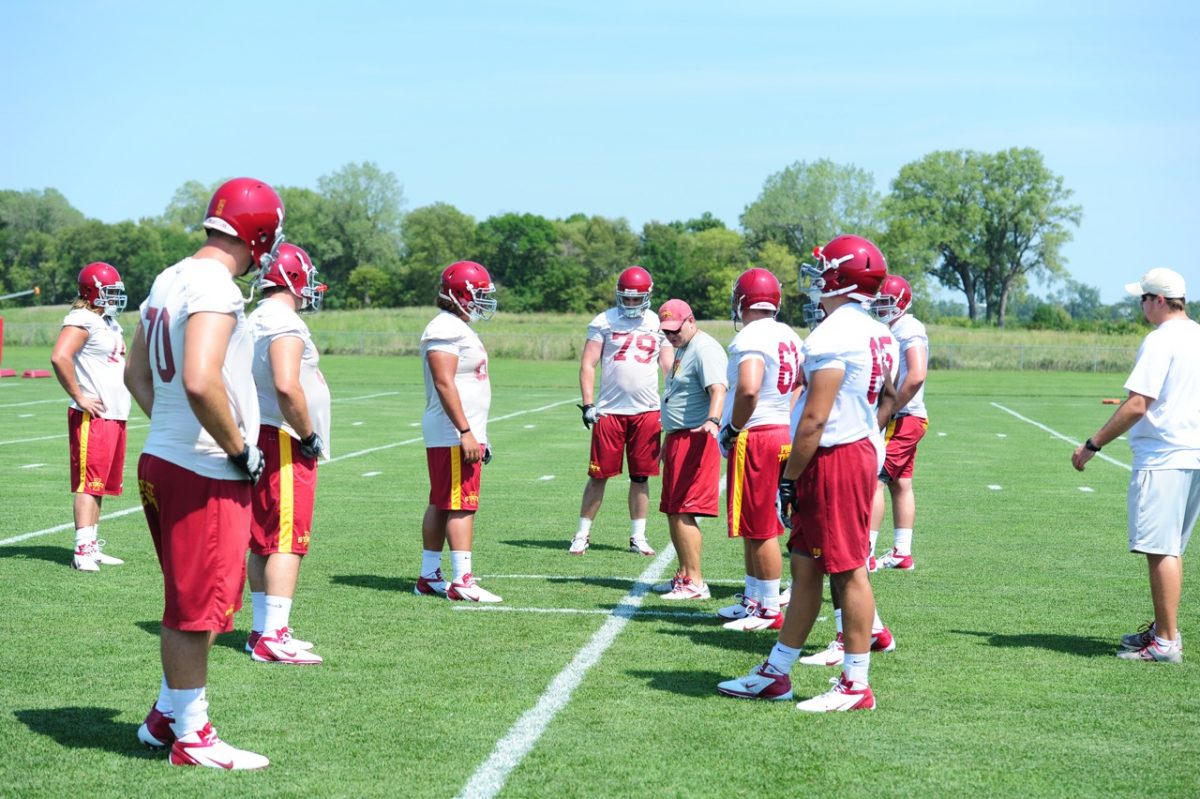 AMES — Kelechi Osemele is in Baltimore and Bill Bleil is sleeping like a baby.

Yep, the Iowa State offensive line coach is that confident in his troops.

A year after breaking in three players who had never played a snap of college football, the Cyclones return a line that is both deep and talented.

“This might be as good as a group I’ve had in 25 years of coaching o-line,” Bleil said at Iowa State’s media day on Thursday.

“We feel really good about the offense as a whole, and the offensive line is the start of it because we want to run the football,” Iowa State offensive coordinator Courtney Messingham said.

With a strong stable of running backs, the Cyclones should be able to pound the football. Last season, Iowa State averaged 174 yards on the ground. Cyclones head coach Paul Rhoads is hoping to push that number north of 200 in 2012.

“With our style of football, people think you are a throw it all over, but we’re not,” Messingham said. “We want to establish the run. We want to make people stop the run.”

Iowa State will be more versatile in the run game this season, as well. In addition to their potent shotgun read attack, Bykowski said the team is working on running it from under center and in the pistol formation.

Stepping in for an all-American like Osemele is no easy task, but Carter Bykowski is ready for the challenge. The senior learned from Osemele the past few seasons and Bleil thinks he’s ready to anchor the line.

“Carter Bykowski has really come into his own the tackle spot,” Bleil said.

It helps that Bykowski has formed close bonds with his fellow offensive lineman. The 6-foot-8, 303-pound Minnesota native said because the line is so close they know what each other is thinking without saying anything.

In hostile Big 12 stadiums, that gives the Cyclones a huge advantage.

“It’s crucial to be on the same page,” Bykowski said. “I feel like, not even saying the right thing, but just making a certain sound, or certain movement with your hand, we’re on the same wavelength. It’s kind of like telekinesis.”

Opposite Bykowski is Brayden Burris at right tackle. Messingham said the senior was playing the best of any Iowa State lineman last season before he got hurt in the Texas game. Now that Burris is healthy, Bleil is confident there are no weak links across the line.

“You are going to miss Kelechi and Hayworth,” Bleil said. “They were very physical football players. But in reality, it’s more about your least player. Right now, I don’t feel like we have that factor. We have guys that have played a lot of football.

Inside, Iowa State is a year older and a lot stronger.

Center Tom Farniok is back. So is underrated Ethan Tuftee at left guard. Lichtenberg and Gannon should both see action on the right side.

Those four are more than capable of pushing opponents backward.

“Tom Farniok is the glue,” Bliel said. “He played better than a redshirt freshman should play in the Big 12 at the center position. He gained the confidence of the guys around him. They knew he knew what he was talking about. He has a great football IQ.

“The guy that probably doesn’t get mentioned enough is Ethan Tuftee. Ethan’s had a great offseason. He played really, really well last year as a first-year starter.”

Iowa State is so deep, sophomores and redshirt freshmen that might normally play probably won’t see that field this season, Bleil said. That’s important because it allows them to develop mentally and mature physically.

When the Cyclones kick off against Tulsa in the season opener, the offensive line should be ready to go and it’s coach should be well rested.