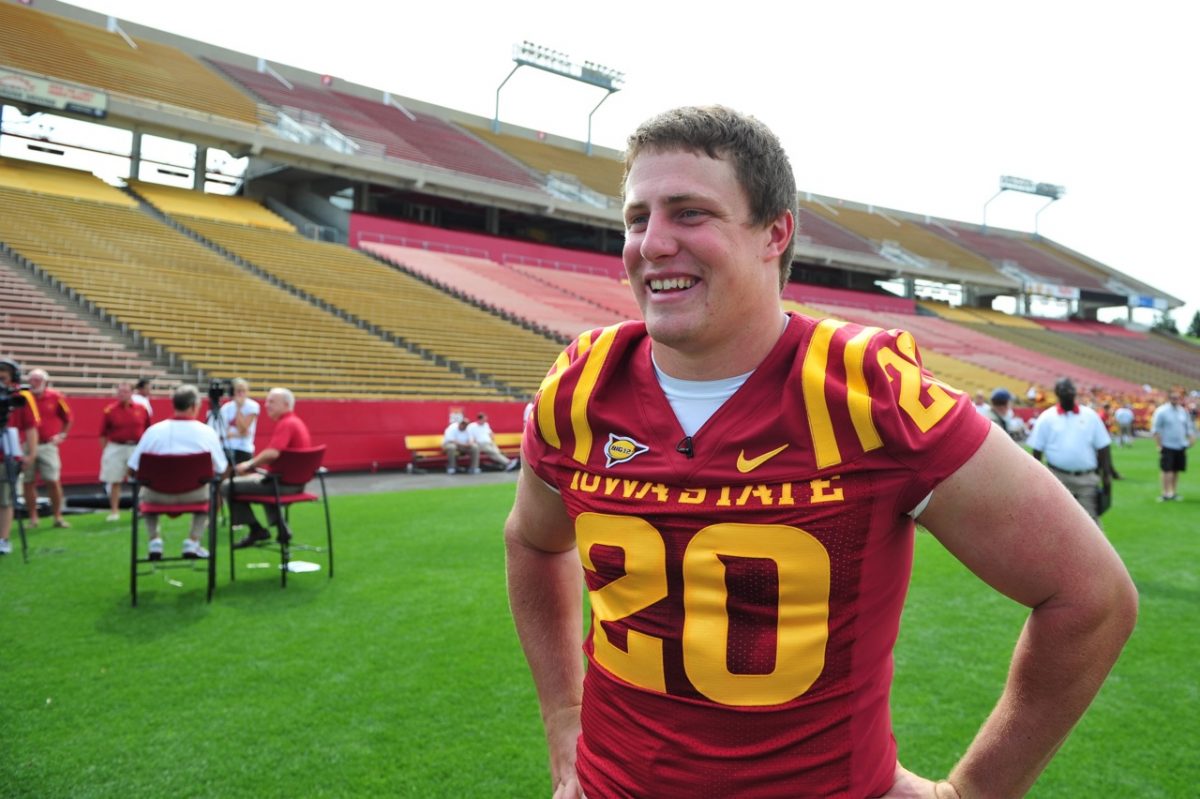 Wally Burnham has seen his fair share of them over the years. Burnham, whose 46 years of expereince makes him one of the most seasoned football coaches in America, has seen his fair share of wimps too. But entering the 2012 Iowa State football season, know this – After nearly five decades of coaching at schools like Florida State, South Carolina and South Florida, Wally Burnham has never seen anybody quite like linebacker Jake Knott.

“He’s the toughest guy I’ve ever coached in my 46 years,” said Burnham at Iowa State’s Media Day last Thursday. “He is the toughest I have ever been around, physically and mentally. You can beat him down but you’re not going to beat him out. He’s got the mindset of, ‘If you’re going to get me out of this game, you’re going to have to kill me.’ That’s about where he is.”

Knott, who dislocated shoulder and then popped it back into place two times in a road game at Baylor last season, played the majority of his junior year with the use of one arm. This “rub some dirt on it” mentality was instilled in Knott at a young age while rough-housing with little brother Luke (a freshman on Iowa State’s football team).

“If you fell down and you got up and you went to mom, it was frowned upon so to speak,” said Knott. “You just didn’t do that type of thing. It was almost to a point where you just stayed out there if you twisted your ankle, you stayed out and you kept playing or your team lost because they had to forfeit. That’s kind of how we did it. Unless you had to go to the hospital, you kept playing.”

Unless you had to go to the hospital that is…”Mr. Tough Guy” Knott recalls that happening, only once though (and he isn’t proud of it either).

“I ran into a barbed-wire fence one time and my mom made me go to the hospital,” said Knott. “That’s the only time I remember ever having to do anything about it. I got cut pretty bad.”

(It was at this point in the interview when Knott proudly showed me this scar on his arm from that very run-in with the barbed-wire fence. He’s a proud papa of that battle wound.)

Luke says that big brother Jake has always been this way.

“He’s always been a little rough around the edges. We always competed in different things in the back yard,” said Luke. “If I were to somehow get a point on him or something it was like the end of the world. He would always find some way to retaliate. He’s always been a competitive guy so when he gets dinged up, his mind isn’t on his injury.”

The good news is that Knott is as Paul Rhoads said, “healthy as a horse” heading into 2012.