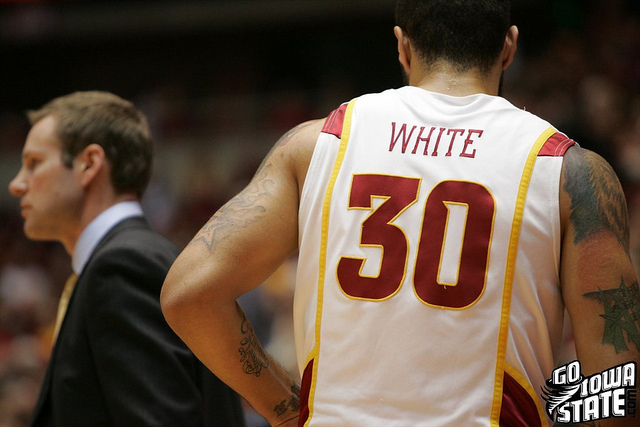 I’m not sure that anything could have wiped the massive grin off of Royce White’s face.

After learning of his team’s NCAA Tournament draw on Sunday evening, Iowa State’s First-Team All Big 12 forward appeared to be downright giddy.

First up for the Cyclones are the defending national champs UConn, a team that White surprisingly knows quite well.

“For me, it’s exciting to go against guys who I actually know," said White. "They don’t seem like Gods to me. I’ll put it like that.”

The Huskies that White speaks of are Alex Oriakhi, Shabazz Napier, Jeremy Lamb and Roscoe Smith. Back when White was a blue-chip high school prospect, he’d often run into these then future Huskies on the AAU circuit.

“I’m a lot different player than I was in high school but I’m sure they are. That’s the fun of it,” said White. “If I was going to play in the tournament against anybody, it’d be against guys like that.”

And as for Iowa State’s potential second round opponent, the top-ranked Kentucky Wildcats…Well, White has plenty of history with that program as well.

“I almost went to Kentucky so that’s one,” said White. “That brings its own thing in itself.”

Iowa State’s draw in the 2012 NCAA Tournament is a tough one, no doubt. But it’s also as intriguing of one as any player, coach or fan could ask for. Enjoy the ride Cyclone Nation.

NO DOUBT: I had a nice talk with Chris Allen after Iowa State’s NCAA Tournament fate was unveiled last night. Like White, Allen welcomed the challenge of Iowa State’s difficult draw.

Besides that, we got to talking about the fact that in his fourth year of playing college basketball, Allen will play in his fourth straight NCAA Tournament. Previously at Michigan State, Allen has played in 14 NCAA Tournament games including two Final Fours and an Elite Eight.

I asked him if at any point this season, specifically after the Drake or Northern Iowa losses, Allen thought that this team might not make it to the Big Dance.

“There are always those games that you lose when you think, “How did we lose to those guys?’ Not putting anything on their program or nothing like that but just, you know what you are supposed to do and what you are expected to do,” said Allen. “When you lose to a team that you are expected to beat, it’s kind of hard. It kind of messes with your confidence a little bit and you beat up on yourself. I feel like we built that back up as the year went on.”

The simple answer is no. Allen, the Cyclones and their head coach were confident all along.