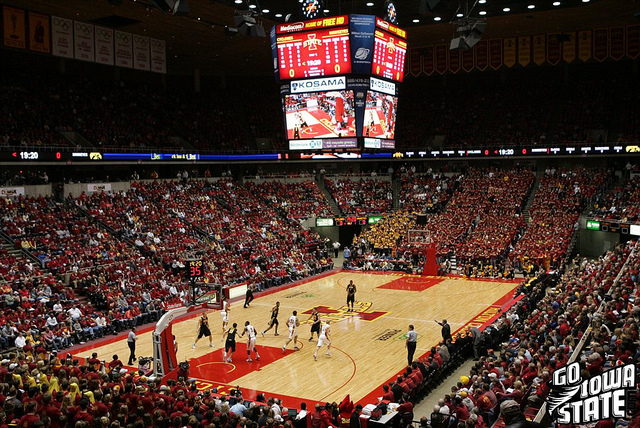 Let’s not get ahead of ourselves here.

Sure – Tomorrow night’s showdown with No. 9 Missouri is as big of a men’s basketball game that has been played inside of Hilton Coliseum in years. But remember that it is still only Jan. 11. Having said that, if the Cyclones keep playing the way that they did in the opening week of Big 12 play, there will be many more of these to come in 2012, which brings me to this.

How do you guarantee more "big games" in the future? For Iowa State (and everybody in the Big 12 for that matter), it’s actually pretty simple.

Win at home. It doesn’t matter if it is Missouri, Kansas or Texas Tech. Protect your house. The rest will take care of itself. In most years, a .500 record in the Big 12’s regular season will at least get you in the NCAA Tournament conversation (by no means will this get you in the Big Dance, but at this point it is something to shoot for) when March rolls around and that’s not counting the Big 12 Tournament. With Iowa State’s 24-point road win at Texas A&M on Saturday, you might say that the Cyclones are playing with house money.

“I would love to get a little string going here," said Iowa State head coach Fred Hoiberg. "I remember my junior year for an example, we were 7-0 at home and 1-6 on the road. We expected to win every game at Hilton and we need to have that mentality.”

Iowa State’s most recent NCAA Tournament team (2004-2005) did this for the most part, going 13-3 at Hilton Coliseum. Those three losses came to Kansas, Nebraska and Colorado (think Wayne Morgan wishes he could have had those two back?).

Heck, even in 2003-04, the NIT bound Cyclones went 17-1 at home (one loss was to 13th ranked Oklahoma State). The NCAA Tournament berth wasn’t there, but opponents (the Cyclones defeated two ranked teams, Kansas and Texas at home that year) still feared Hilton.

The "magic" disappeared during Wayne Morgan’s final year in Ames, as Iowa State went 10-6 in Hilton during the 2005-06 campaign. It was nowhere to be found Greg McDermott’s reign as Iowa State’s head coach (McDermott went 48-24 in four seasons) and so far, Fred Hoiberg’s two teams have lost seven games at home in a season and a half.

Iowa State is currently 2-0 in the Big 12 for only the fifth time in school history. Team morale and program momentum are on an upward swing.

No. 9 Missouri is knocking on the door. Beating a ranked opponent at home for the first time in over half of a decade is a big opportunity for this program to take the next step in being "back."

“We believe that we should take care of business at home," said sophomore Royce White. "We know that our style of play and offensively, we are probably going to shoot well at home on most nights. It’s the defense and the rebounding thing."

White and the Cyclones should have plenty of help on Wednesday evening as Hilton Coliseum is anticipated to be one rowdy arena.