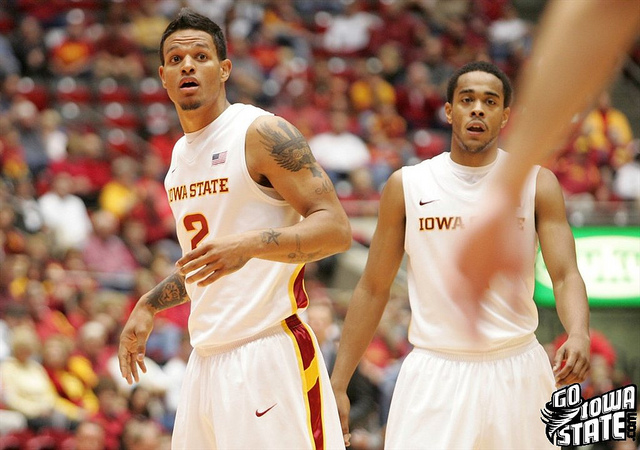 Wait a second…Iowa State has a game tonight?

This Monday = game day stuff is messing with my routine folks…

Okay. Okay…Check the site out later on this morning/early afternoon. I promise to have an Iowa State/Baylor preview ready for you.

In case you just can’t wait a little longer to sink your teeth into tonight’s contest, the Clones are an 8.5 point underdog. That number seems high to me. After all, the Cyclones are coming off of a dominating 23 point win (though it was over a below average Texas A&M team) while Baylor’s recent meltdown continued on the road at Missouri.

Let me pose you this question about Baylor: Is it fair to call two losses (keep in mind that they were both lopsided and the Bears looked awful in both games) to Kansas and Missouri (both top 10 teams) a meltdown? Those are the only programs that Scott Drew’s team has lost to this year…It’s an interesting one.

The game tips tonight at 6 p.m. and will be televised on ESPNU.

NIANG’S VISIT: I’ve covered Iowa State athletics in at least some capacity since the year 2004. I can sit here today and say that I’m not sure I’ve ever covered a future Cyclone who has more passion for Iowa State than hoopster Georges Niang. The Cyclone signee was in Hilton Coliseum for Iowa State’s rout of Texas A&M on Saturday. Not only is Niang one of 2012’s top 100 prospects, he’s a very well-spoken young man who’s natural charisma is impossible to miss. Prediction: Niang will be a fan favorite to come for years in Ames.

BIG 12 BANTER: I’ve noticed a trend over the last month or so with Iowa State basketball fans. Any time that I post the line of a Cyclone game, I see two very predictable responses.

Jubilation when the Cyclones are favored. If Iowa State is any sort of a dog at all, I get a handful of, "That’s how we like it," comments.

Essentially, these folks enjoy when the professionals in Las Vegas view Iowa State as an underdog.

I think that most of you already know this but in general, you want Vegas on your side. Those guys are right more often than they are wrong.

However, they are wrong from time-to-time and Iowa State has taken advantage of that a few times this season.

— I see that Kansas is a four point favorite over Kansas State tonight. That game will be played in Manhattan. I smell an upset….Anybody else catching a whiff of it?

From an Iowa State perspective, who will you be rooting for tonight in the battle for the Sunflower State?

If Kansas wins, it all but eliminates Kansas State from being a contender for fourth place in the Big 12. However, KSU still has road trips to Baylor, Missouri and Texas A&M left on its schedule. The chance of the Wildcats hanging around seems unlikely with or without a win this evening.

On the other side, let’s say that the Wildcats pull off the upset. Kansas would then drop to three losses (Iowa State has four) and would be within striking distance of the Cyclones down the stretch.

Still – A home win over Kansas is Iowa State’s most impressive victory of the season. The Cyclones will want that win to be as strong as possible when the selection committee meets in early March…

It’s your call. I can go either way on this one.

— Texas Tech picked up its first conference win of the season on Saturday at the expense of Oklahoma. Here’s another prediction. The Red Raiders will make it two in a row on Tuesday, with a home win over Texas A&M. The Aggies looked like a team that just didn’t care in the second half on Saturday. That’s not taking anything away from Iowa State either. It was almost as if Iowa State’s surge to start the second half sucked the will right out of A&M.

I”ve got a lot of these today…

— Here’s a funny dog story for you. So on Friday night, I paused my DirecTV. You know how when you do that, the little DirecTV logo starts bouncing around a black screen? Well that happened and my dog (Paisley, an 11-month old golden retriever) started going crazy. She was watching that logo (like her daddy, Paisley loves television) and for some reason, it freaked her out. Anyway, I turned the television back on and all was right in the world again. Until Sunday night that is.

The wife and I were in the back of the house doing a little laundry (Some really exciting stuff. To all of the bachelors out there reading – This is what marriage is all about. Dogs that misbehave and laundry. Excited yet?).

Now keep in mind that Paisley is a very nice dog. In fact, I’ve never seen her actually be mean to anybody. Well while we were doing the laundry, I heard her start to aggressively bark at something in the living room. The wife and I looked at each other and proclaimed that something wasn’t right. Worried that some scumbag was attempting to break into our humble little Bondurant mansion (that’s a joke people), being the man of the house, I walked into the other room to see what was up.

Once again, Paisley was agitated and downright ticked off at that dagum DirecTV logo ago (I had paused the TV while watching the Grammy’s). This thing really freaks her out! I don’t get it…

Random/pointless story (hence why it is in the RANDOMS section of Monday Musings) but one I thought I’d share. This is my life. Deal with it.

— I’m not sure how the Ames Parking Police sleep at night. Last Thursday, Paisley had spent the day over at my in-laws house out in west Ames. After completing our call-in show, I ran by their place to pick her up. I left my vehicle RUNNING with the trunk wide-open. I was going inside to pick up the dog and her kennel. I was parked for maybe 10 minutes and during this time, I must have been blocking part of the sidewalk. During this time, I made several trips to and from my vehicle before completing these tasks and heading back home. While pulling out of the driveway a little before 10 p.m., I noticed that I had a parking ticket. Really?

The issue I had wasn’t the ticket itself (if I broke a rule, I broke a rule), but more the fact that whoever gave it to me had to be watching me/writing the thing out from afar. I was walking in and out of that house every minute or so (as was my wife). This parking officer didn’t have time to walk up to the RUNNING vehicle, write the thing out and take off. It had to have been some sort of a hit and run. Unbelievable. Oh well. Life goes on.

— Onto the Grammy’s…Here are some quick hits on the second biggest night of the year in music (behind the CMA’s of course).

*** I’ve got to give former 1460 KXNO talk show host Matt Perrault some credit today. When Perrault left his job in Des Moines to head out east last year, he called me one day asking if I wanted tickets to see some band called "The Civil Wars" at the M-Shop at Iowa State’s Memorial Union. At this time, I had never heard of them. My wife and I don’t have much of a life (we were free that night), so we took him up on the offer without hesitation. Less than a year later, the Civil Wars performed at the Grammy’s, opening for my girl, Taylor Swift.

It’s amazing what 300 days can do for an artist’s career. Again – They went from the M-Shop to the Grammy’s in that amount of time. Fantastic.

*** Speaking of Gaga, I found it funny that she was seated next to Miranda Lambert and Blake Shelton last night. Now that’s an odd pairing…

— I caught up on my DVR a little bit on Sunday morning. I haven’t enjoyed an hour of television like I enjoyed CMT’s "Crossroads" with Carrie Underwood and Steven Tyler in quite some time.

I’ll have a Baylor preview for you all in a few hours. Toodles. 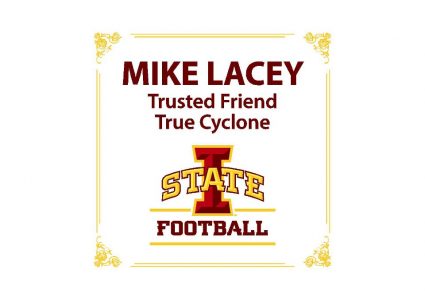