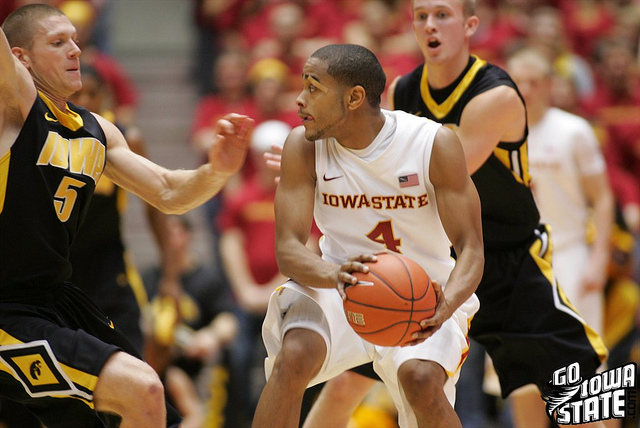 How ugly was Sunday’s 59-52 Iowa State men’s basketball win over Central Michigan? Midway through the second half, I felt like I was watching two SWAC teams hashing it out on the hardwood.

Here’s some good that I took from the win. The Cyclones did hold the Chippewas to only 52 points. Give some credit where it is due. Despite what many seemed to think about the game, the defense wasn’t that bad at all.

Also, Chris Allen, Chris Babb and Scott Christopherson combined to go 4-for-18 from the floor. Here’s my stone cold LOCK for the rest of the season. Those three will not combine for a night like that more than once more this season. Deal? I’m officially on the record with that prediction.

The season is still very early but we’re deep enough in where we can start noticing a few trends with this squad. The first is that they appear to really play up and down to their competition. The Cyclones don’t seem to get too excited for bouts with programs like Northern Colorado and Central Michigan.

The problem? From the naked eye, it appears to be a lack of leadership. Somebody, anybody, has to get these guys fired up before and during games. Up early? Bury them. In a slump? Keep plugging away.

I write that because I can guarantee one thing. Iowa State basketball fans will show up in droves to support a team that works hard. All you have to do is look at last season when he Cyclones went 3-13 in the Big 12 and Iowa State fans still turned out a top 30 attendance number nationally.

Cyclone fans are addicted to hoops. What’s the one thing that you can do to keep folks out of Hilton Coliseum? That’s develop a reputation as a lazy basketball team.

Last year’s Cyclones had very little talent and even less depth on the roster, but that group dove for every loose ball and fans appreciated the way that they cared about every single game, despite who they were playing.

I can’t say that I’ve gotten the same vibe from this group only 12 games into the season.

What I just wrote isn’t some big secret. Royce White talked about the team’s overall lack of intensity after Sunday’s game. Fred Hoiberg gets it. Heck, to start off Sunday’s postgame presser, a reporter made a comment to Fred that he showed a lot of intensity during the game.

"Somebody had to," Hoiberg replied.

Hoiberg knows as well as anybody how to consistently fill out Hilton and he’s alluded to it multiple times already this season.

For every game like the snoozer we saw on Sunday, I predict you’ll see this team show up and entertain the heck out of you in another. I still think that this group of Cyclones will upset quite a few programs this season.

Only my opinion here, but Wednesday night’s game against Lipscomb is a big one folks. It’s the final contest before Christmas break. Right now, the Cyclones are down after an uninspired win. I’ve never played division one ball, but I can only imagine a holiday break sits a lot better when you’re feeling good than after two lackluster performances.