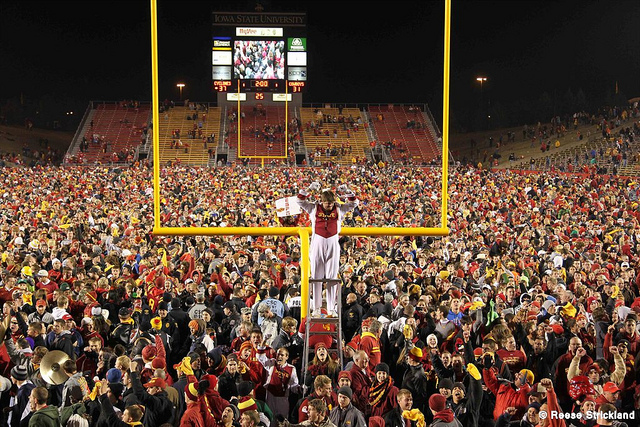 Something tells me that this one will be a blowout…

Your Clonie nominations for 2011’s Game of the Year are…

— Most call it the biggest win in Iowa State football history. The second-ranked Oklahoma State Cowboys rode into Ames with BCS Championship Game berth on their minds. The Cyclones had other plans. After getting down 24-7 in the second half, Iowa State stormed back to beat the Cowboys in a 37-31 double-overtime thriller on national television. Freshman quarterback Jared Barnett improved to 3-0 as a starter while throwing for 376 yards and three touchdowns along the way. The win also made the Cyclones bowl eligible for the second time in three years under head coach Paul Rhoads.

— The greatest football game in Cy-Hawk history? That’s what many called Iowa State’s triple-overtime 44-41 victory over the Hawkeyes. Steele Jantz threw for 279 yards and four touchdowns in the win. The win improved Iowa State’s record to 2-0 on the season.

— Christy Johnson-Lynch’s program advanced to its second Elite Eight in four years after traveling to Minnesota and beating the Gophers 3 to 1. Carly Jenson  led Iowa State with 19 kills in the match. Iowa State eventually lost its Elite Eight match against Florida State 3-2.

— The 25th ranked Longhorns strolled into Ames for a Big Monday whiteout on national television. After going to overtime, the Cyclones pulled off the 66-57 victory behind Chelsea Poppens’ 23 points and 13 rebounds.

— In the first meeting between coaches Fred Hoiberg and Fran McCaffrey, the Cyclones walked away from Carver Hawkeye Arena with a 75-72 victory in hand. Scott Christopherson went 7-of-12 from 3-point land and scored 30 points in the win. Christopherson’s hot shooting helped offset Diante Garrett’s 5-for-24 mark.