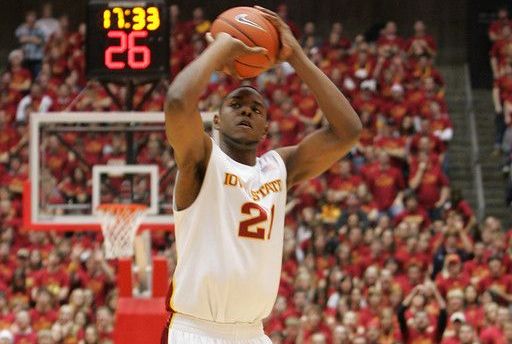 Kansas is the third-ranked basketball team in America. They’re 17-1 and thinking national championship in Lawrence. They’ll probably show up and dismantle a frazzled Iowa State on Saturday, right?

It has been a tough week within the Cyclone basketball program. Lucca Staiger is gone. Chris Colvin is back. Frankly, Iowa State is desperate. Combine that with the fact that a sold out Hilton Coliseum will be absolutely rocking, an upset could be in store. Will it happen?

So you want to know how good this Kansas team is? Here is a list of statistical categories that the Jayhawks lead in the Big 12: scoring offense, scoring margin, free throw percentage, assists, steals, assist-to-turnover ratio and 3-point field goals made.

Yes…they are the best in the league at all of the above. That should pretty much sum things up for you. If you’re still not convinced, read on. Actually, keep reading regardless.

Kansas’ one loss came back on Jan. 10 at Tennessee. KU’s impressive wins have come against the likes of Memphis, UCLA, Michigan and Baylor. They are the only team in the Big 12 that doesn’t have a conference loss at this time.

Kansas has dominated their series with Iowa State over time with a record of 166-58 over Iowa State. However, they Jayhawks are only 20-18 in the history of Hilton Coliseum.

Four Jayhawks average double-digit points this season as Kansas is averaging 85 points per game. They don’t just beat people either. They blow them out. KU’s scoring margin is 23.5. That is the best in America.

Senior Sherron Collins leads the way for Kansas at 16.3 points per game. Next up is freshman Xavier Henry. The 6-foot-6 all-world freshman averages 14.9 points per contest. Junior Brady Morningstar joins that tandem in the backcourt.

Down low, the world belongs to Marcus Morris and Cole Aldrich. Aldrich’s scoring numbers are down this year but he’s still been solid averaging 10.8 points per game with 9.9 rebounds. Morris averages 12.2 points a game.

That is the problem. If an opponent shuts one Jayhawk down, there are three others capable of dropping 20-plus in a game. This is a balanced basketball team has as much, if not more talent on its roster than anyone.

Still, for this team’s standards, the Jayhawks haven’t been sharp as of late. Ever since their five-point win over Cornell on Jan. 6, Kansas hasn’t been the dominant team that we saw early in the season. They lost to Tennessee. They were trailing Nebraska at the half. The Jayhawks had no problem with Texas Tech, while Baylor took them down to the wire.

If there is such a thing, Iowa State is getting this team at a good time.

This will be the first time that Iowa State fans will see what this team will truly look like without Lucca Staiger in the lineup. Sure, the German didn’t play during Wednesday’s loss to Texas Tech, but the team had little to no notice that they’d be without their top marksman. They weren’t prepared to play without Staiger but that won’t be the case on Saturday.

If Iowa State wants to have any chance in this one, they’ll need to improve at the free throw line. The Cyclones went 11-of-22 from the charity stripe against Texas Tech and are shooting under 60 percent as a team since conference play began. That is the worst in the Big 12.

It was only a year ago when Craig Brackins had his national coming out party for Iowa State against Kansas. Brackins scored 42-points against the Jayhawks in Ames. There is something about Kansas that Brackins likes. He averages 20.3 points per game and 8.3 rebounds in four games against the Jayhawks throughout his career.

Greg McDermott has never beaten a Kansas team. He’s 0-6 against the Jayhawks since taking over at Iowa State.

I actually think that this game will play out a lot like the Texas one did. Iowa State will come out emotional and be fueled by an intense crowd early. I can see it now. Scott Christopherson will be more comfortable in the starting lineup. Marquis Gilstrap will come out of the gate with energy and end up with his traditional 15 and 12.

To me, Brackins is the key. He owned Kansas a season ago. He’ll be the focal point of KU’s defensive attack. How will he react?

If Iowa State wants to have a prayer, they absolutely have to get better play out of the point guard position than what we’ve seen over the past week. Diante Garrett went 4-of-11 on Wednesday, while missing a handful of layups. That’s just the start of it.

Hilton will be hopping. The crowd will be awesome. I anticipate a solid effort out of the Cyclones but the numbers and matchups simply don’t add up for an upset.