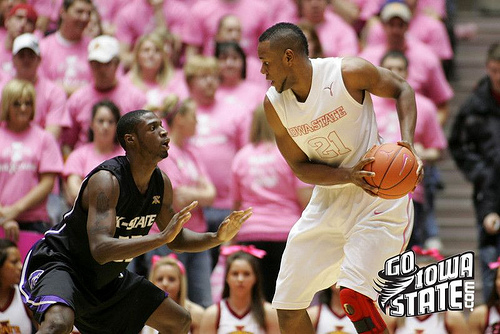 That is only on paper though. If Iowa State wants to even be relevant next week in Kansas City, the Cyclones desperately need to grab some momentum and that will start by playing a solid game in Manhattan.

Does Iowa State have a fighter’s chance against the nation’s fifth-ranked team? Let’s break it down.

The Cyclones gave Kansas State all that they wanted when these teams first met back on Feb. 6. Kansas State, who was ranked 10th at the time, escaped Hilton Coliseum with a 79-75 victory. Denis Clemente was the guy who killed the Cyclones in that contest. Clemente went 9-of-18 from the field, while scoring 30 points. He went 6-of-8 from 3-point range. Clemente is averaging 16.0 points per game this year and he averages 2.8 made 3-pointers a game. That is the second best number in the Big 12 Conference for an individual.

You can’t talk about Clemente without mentioning his backcourt partner and Kansas State’s top-scorer, Jacob Pullen. Pullen, a 6-foot junior, averages 18.6 points per game and dropped 15 on Iowa State in the first meeting.

The Wildcats are coming off of an 82-65 thumping that they took at the hands of rival-Kansas on Wednesday night. Before that contest, Frank Martin’s crew had won seven straight basketball games.

The Cyclones will have their work cut out for them in Manhattan on Saturday. Iowa State head coach Greg McDermott has yet to bet Kansas State during his tenure in Ames, going 0-7 along the way.

When these teams met in February, Craig Brackins went off for 29 points. In that same game, Marquis Gilstrap scored 18. Ultimately, Iowa State’s sluggish 5-of-23 mark from 3-point range cost the Cyclones the game.

The Cyclones are coming off of a heartbreaking overtime loss to Missouri this past Tuesday. Of Iowa State’s 12 conference losses, seven of them have come by seven points or less.

I think that this game will play out much like we’ve seen all season long. The Clones will show up and play hard. They might even lead at halftime. They’ll play with Kansas State until the last five to 10 minutes and that’s when the Cats will pull away.