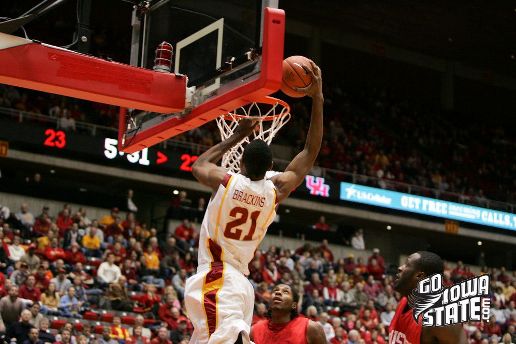 Last week, trying to rank the Big 12 men’s basketball teams proved to be very, very difficult. Things are a little bit clearer this time around. Away we go. Feel free to post yours in our men’s basketball forum.

1 – Kansas, 17-1, 3-0 – The Jayhawks suffocated Tech last Saturday. I didn’t read much into their six-point survival against Baylor on Wednesday. Having said that, many KU fans seem apprehensive about their team’s future this season. Isn’t that funny Fanatics? Kansas fans are upset with a six-point win over a good Baylor team. That’s how you know you are spoiled. I challenge any Kansas fan reading this to sit in a Cyclone’s seat for one season. That’s a double-dog dare.

2 – Kansas State, 16-2, 3-1 – Sure, it would be pretty easy to slap Texas in this spot. But the Wildcats beat the Horns on Monday and frankly, I think that right now, they’re the second best team in the league. Frank Martin scares me too. I don’t want to offend him so I have to throw KSU here don’t I?

3 – Texas, 17-1, 3-1 – The Horns slipped up against a hostile crowd in Manhattan this week. Damion James and Dexter Pittman combined to score a weak 15 points in that specific game. Really, nobody played well for the Horns. Avery Bradley was 5-12 from the field and led the team in scoring with 11.

4 – Baylor, 14-3, 2-2 – After a convincing win over Oklahoma State, the Bears had a chance to win late in their game at Kansas on Wednesday. LaceDarius Dunn was phenomenal in that contest, scoring 27 points and grabbing seven boards. Right now, Dunn leads the Big 12 in scoring at 25.8 points per game.

5 – Texas A&M, 13-5, 2-2 – The Aggies beat Oklahoma on Tuesday to move up in this week’s poll. They also impressed me in their five-point overtime loss in Austin last Saturday. A solid week for a team that just keeps getting better.

6 – Missouri, 14-4, 2-1 – If only the Tigers wouldn’t have slipped up against Richmond and Vanderbilt during the non-conference. Missouri’s one conference loss was in Norman on Monday so they’re still on track for a pretty decent season. Still, I like Baylor and A&M ahead of them right now. I realize that I have Mizzou ranked ahead of the same Oklahoma team that beat them this week, but the Tigers overall body of work is simply better.

7 – Oklahoma, 11-7, 2-2 – This team nearly pulled off an incredible week but fell short in College Station on Tuesday. With games against Texas Tech and Iowa State this week, the Sooners should be 4-2 in league play a week from now.

8 – Oklahoma State, 14-4, 2-2 – The jury is still out on this Oklahoma State roster. With James Anderson suiting up, anything can happen (he’s averaging 23 PPG). This past week, a loss to Baylor and 12-point win over Colorado did nothing to improve or hurt their stock

9 – Texas Tech, 13-5, 1-3 – Pat Knight’s Raiders were hurting in a bad way until the Clones rolled into town Wednesday night. Their game with Oklahoma tomorrow is a must win if Tech wants to stay in the NCAA Tournametn conversation.

10 – Iowa State, 12-6, 1-2 – It was a tough week for the Cyclones. Everything seemed peachy after breaking a 16-game conference road-losing streak at Nebraska on Saturday. Then, Lucca Staiger left and drama ensued.

11 – Colorado, 10-8, 1-3 – The Buffs have proven one thing so far this season. That’s that they won’t roll over and die for anyone. They also score a lot of points, as the Buffs are third in the league in that category averaging 80.8 points a game, as a team.

12 – Nebraska, 12-6, 0-3 –The Huskers didn’t impress me last Saturday in their three-point loss to Iowa State. I think that Doc Sadler is a solid coach, but it is going to be a long year in Lincoln.