Friday night, a pair of former Cyclones will be on one of basketball’s biggest stages when the Los Angeles Lakers and Denver Nuggets tip-off for game one of the Western Conference Finals from the Orlando Bubble.

Denver back-up point guard Monte Morris is expected to play a key role in the series for the surging Nuggets, who have come back from 3-1 deficits in each of their last two series to clinch a spot in the conference finals. Meanwhile, on the other sideline, Lakers rookie Talen Horton-Tucker seems to be gaining traction in the organization after appearing in each of the team’s last two wins over the Houston Rockets to earn their place in the NBA’s final four.

Morris is averaging 8.5 points and 2.6 assists while appearing in all 14 of the Nuggets’ 2020 postseason games, including making four starts. The Cyclones’ all-time leader in assists and steals scored in double-figures in the team’s game five and game six wins over the Los Angeles Clippers that propelled them to their seven-game series win and into the conference finals.

He also hit a key shot at the third-quarter buzzer in game seven that gave the Nuggets an eight-point lead entering a final period in which they pulled away from the second-seeded Clippers.

Horton-Tucker was inactive for seven of the Lakers’ first eight games during the postseason and received a DNP in game four of the team’s 4-1 series win over the Rockets. But, as the Lakers’ big men struggled against Houston’s small-ball style, Horton-Tucker’s name was called upon in games five and six to provide a spark off the bench.

Morris and Horton-Tucker are the first Cyclones to be on conference finalists since Jamaal Tinsley and Fred Hoiberg in 2004 with the Indiana Pacers and Minnesota Timberwolves, respectively.

Only three other former Cyclones, Zaid Abdul-Aziz with the 1970 Milwaukee Bucks, Jeff Hornacek with multiple Utah Jazz teams in the 1990s and Kelvin Cato with the 1999 Portland Trailblazers, have achieved this feat.

Hornacek is the only former Cyclone to ever appear in the NBA Finals.

Game one between the Lakers and Nuggets tips off at 8 p.m. central time on TNT. 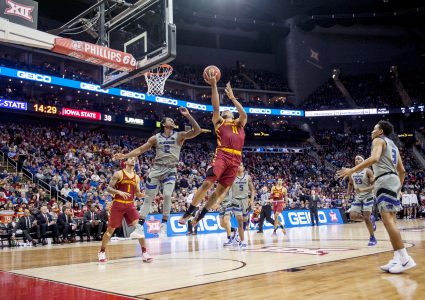