Since the first installment of our fall position previews, we have gotten some clarity on how Iowa State’s 2020 football season will look with the Big 12 going to a nine-game conference game plus one non-conference game schedule.

At this point, we still do not know for certain if fall camp will begin on Friday, but, until we hear otherwise I suppose we just have to assume that it will.

Former four-star recruit Breece Hall solidified himself as one of the best young tailbacks in the country during the second half of last season. Entering year two, the question becomes whether or not those final eight games are a sign of Hall’s fast-rising trajectory or if he will fall back to Earth as a sophomore.

At this point, it would be hard to side with the latter considering the talent Hall displayed while rushing for 897 yards and eight touchdowns on 186 carries as a freshman with almost all of that production coming in the team’s final eight games. He also showed his potential as a playmaker in the passing game by making 23 receptions for 252 yards and score.

Hall might be the most talented pure running back Iowa State has had in quite some time, and the hope is that the rising talent in front of him could help unlock his potential. His combination of explosiveness, elusiveness and power could lead to him becoming one of the best ball-carriers in all of college football.

This season will be in an important one in Hall making that leap sooner rather than later.

Iowa State’s third-leading rusher a year ago, Johnnie Lang, is back for his redshirt junior season, and so is redshirt senior Kene Nwangwu (more on him in a minute). Lang seems like the obvious most likely choice to be the backup tailback, but don’t sleep on redshirt freshman Jirehl Brock.

Brock, a native of Quincy, Ill. and former high school quarterback, was actually the more highly-touted of the Cyclones’ 2019 recruiting class running back duo, but played in only four games recording 48 yards on nine carries last season before taking a redshirt. He and Hall have a chance to come together to form a classmate tandem at tailback that could be a force in the Big 12 for years to come.

As of now, my money would be on Lang to start the season as the team’s primary backup at running back, but I imagine the staff will be looking for ways to get Brock involved during his second season in the program.

3 – Can the staff unlock Kene?

As a freshman in 2016, Nwangwu looked to be well on his way to becoming one of the nation’s most electric playmakers while earning Freshman All-American honors as a kick returner. That was slightly derailed when he ruptured his Achilles tendon during the following winter workouts.

After a year away, Nwangwu returned to the field in 2018 and promptly took back the title as the league’s best kick returner, leading the Big 12 in return average. He was second in the league in that same category last season, but struggled to find a consistent role in the offense despite averaging 7.2 yards per carry on 16 attempts.

Injuries remained somewhat of a concern at times considering he is far from the traditional downhill running back, but he showed flashes of how special he can be when able to get out into space.

There is no doubt Nwangwu has a chance to be a major playmaker offensively for the Cyclones considering his one of, if not THE, fastest player on the team. The challenge for the staff is figuring out the best way to utilize his talents in ways that allow him to show off that edge-busting speed.

Much like at quarterback, the Cyclones enter the season without doubt as to who will be the top guy at the position. Hall has an opportunity to pull closer to being the best running back in the Big 12 on this side of Oklahoma State’s Chuba Hubbard.

The biggest question mark comes at the backup spot where plenty of talent returns with some rising talent battling for a bigger role in the offense. This fact should breed a great deal of confidence, assuming what figures to be a young (but talented) Iowa State offensive line can quickly gel.

Hopefully, the days of David Montgomery having to put the team on his back and carry the ball 40 times by himself are in the past. Could Hall do that if he had to? Probably.

But, the talent behind him should be able to prevent it from being a necessity. 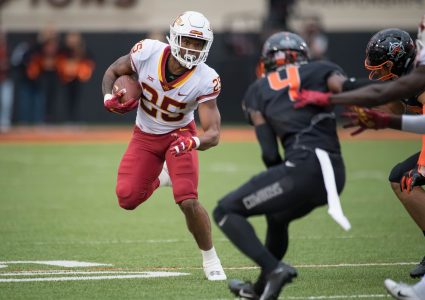